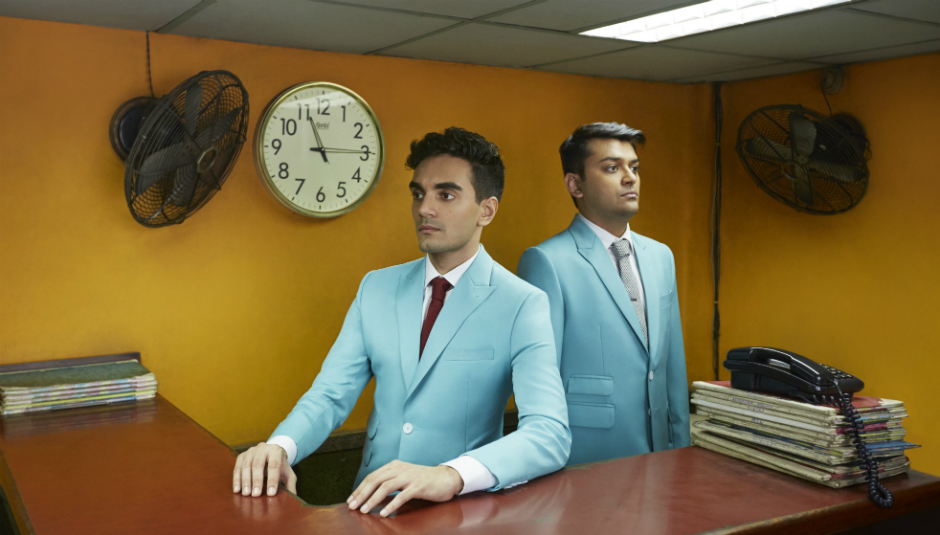 Nischay Parekh and Jivraj Singh are two modern day pop prodigies; whether it be traditional, cinematic or contemporary synth-wave, the duo just have that knack for soothing, heartfelt, hook-laden songs. Based out of Kolkata in Eastern India, their debut album Ocean was recently released by Peacefrog Records – a record they recorded just over three years ago. Their debut single, ‘I Love You Baby, I Love You Doll,’ is portrayed in a video that sees Parekh and Singh working in a hotel dressed up in finely coloured, well-tailored suits – a video that won them recognition by film-maker Wes Anderson. As I call them up, the two Indian musicians had just returned from a shopping excursion, updating their wardrobe and expanding their style. For Parekh and Singh, the visual and audio are intertwined, both feeding into each other, and allowing them to further experiment with their concepts. Much more than a finely tuned pop-act, Parekh and Singh are an act in constant state of motion, and like their suits, they’re often changing colour and style. DiS caught up with them to find out more about their music and to see what the current musical climate in India is like.

DiS: I read that you’ve actually completed your second LP already, so how come Ocean is only just being released now?

Nischay Parekh: Our second album was supposed to be coming out, which we were going to release independently. This was on the cusp of when the Peacefrog deal happened. We actually sent the label music from our second album, which we thought they’d want to release. But the label went back and listened to our older music and they decided to release that first.

Is the album still representative of where you are now as musicians?

NP: Some of the elements are yes, but some of the songs were written when I was 15 or 16 years old. It’s not exactly where we are, but it does have the elements of who we are artistically.

How did you arrive at this stylistic direction?

NP: To be honest, we’re both fans of traditional pop music, anything that may have this verse-chorus-verse template. But it was about how we could make this fun for each other. It feels so weird that this was written and recorded so long ago, it feels as if we’ve had the luxury of time to develop this world the music lives in and figure things out.

How does this come across in a live setting?

NP: The live setting is the only setting we’ve had to explore in the past few years. In India, once you’ve made an album, there isn’t that much to do with it. Once it’s out, then there’s only gigging, because there’s not a lot of people buying music. Even with the artwork and imagery associated with it, it’s stuff that disappears really quickly in India. The live show was the breeding ground for all the ideas that have gone back into the music. Even visually, it’s all about how the live show feels, and how that’s translating back into the music.

Jivraj Singh: Because it’s just the both of us, we have a ton of synthesizers and a lot of effects, so the songs are rearranged and remixed on stage. That’s how the live show evolved the music and the visual aesthetic.

How is touring in India?

NP: There’s a lot that happens in the last few months on of the year, and not much happening in April, May or June. There are a bunch of festivals, which is where our largest crowds are. With the club shows, it’s the same bunch of cities, Bombay, Delhi, Bangalore, Pune, and Kolkata. We’re basically speaking about ten venues with an average crowd of 150 – 250 people, which is why we need to change the presentation of the music, to keep it interesting.

JS: There are a lot of people making a lot of music, but there are hardly any venues. There’s literally no way to monetize it, so people aren’t really playing out that much.

NP: There’s a big rock & roll nostalgia thing here – it exists within its own bubble, like a city out of time. It’s not affected by anything globally, or anything in the continent or country. It’s a nice thing and we like it for sure.

Aside from guitars and drums, what’s your set-up like and what kind of synths and drum machines are you using?

NP: We have a lot of gear, mainly because Jivraj’s family has been involved with music for the last four decades. His room is a real treasure-trove of instruments. The drum machine he uses is a Roland TR-505. We also have a lot of hardware synths. Recently I brought I myself the Prophet-Six, and a Korg Volca. Basically we both like tiny, toy-like synths, much more than fancy big stuff.

The style of production works really well for the record, the layering, and the cinematic vibe. How important for you is this cinematic, and film-influenced element to your work?

NP: The key word for us is ‘narrative’. We like things to belong to a fixed and unified world. We’re always thinking about the end-game. We don’t like albums to be just a collection of songs.

How did you come to using the Woody Allen sample on the track ‘Hill’?

NP: I think I had just seen the film Annie Hall for the fifth time, and I was feeling a bit lazy and didn’t want to write another verse. It’s a bit dark and about not wanting to belong to society as it is. So I think Woody Allen is a perfect fit, as he has this dark, social commentary.

And about that nod of approval you recently received from Wes Anderson. Can you explain what happened here?

JS: This is the power of Facebook. Somebody shared our video with him, and then he wrote back to them saying that he liked it. And then somebody else posted a screenshot of that message, and we reposted that. But everyone thinks he wrote to us directly – it was a modest exchange of a screenshot.

Having said that, that exchange was with someone that he works with, who we know. We checked up on it, and it is legit. We think it’s 90% true.

Parekh and Singh’s Ocean is out now on Peacefrog Records. For more information about the band, visit their official website.

“There is infinity through a telescop...