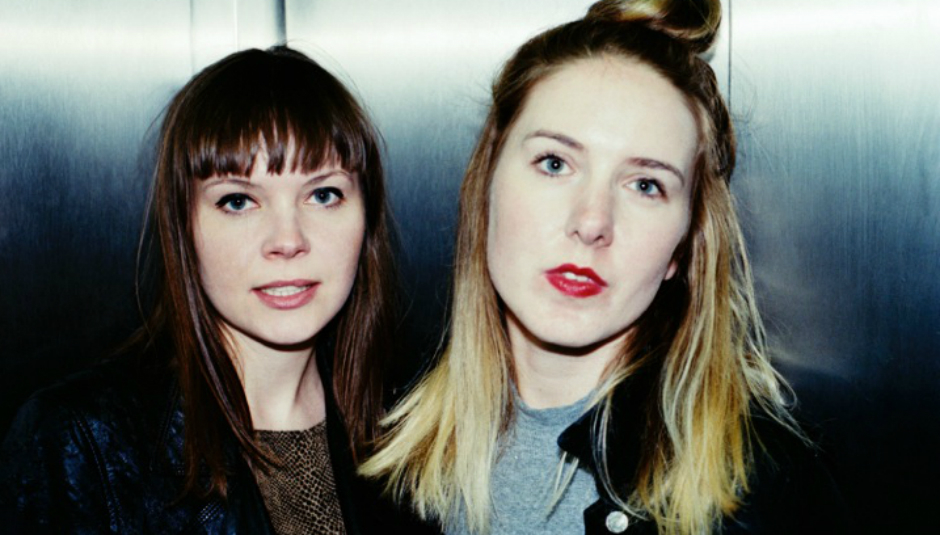 Gurr's Track By Track Guide to In My Head

Gurr's Track By Track Guide to In My Head

Andreya and Laura Lee haven't taken long to cause a fuss; from a standing start and bonding over a shared love of literature and movies, the duo have already played several prominent festivals, supported the likes of Jimmy Eat World, and been booked for SXSW 2017. No wonder their upcomng debut and first UK shows are so highly anticipated. They gave DiS the lowdown on In My Head's eleven bouncy, fizzing budles of joy.

The weird sound you hear in the beginning is Laura moving the reel of the studio tape machine backwards. We recorded and mixed the whole album analog at Kozmik Sound Studio which was then located inside of Funkhaus Berlin. So these kinds of inherent “tape sounds” accompanied us throughout our whole session. We usually play 'Breathless' first in our live set, as well. The song has always given us a lot of energy so we knew it should be the opener for the album.

This is supposed to be the 'Sex Beat song on the album. Laura was listening to Gun Club a lot when we recorded the album so that influenced the bass and drum recordings. The song is inspired by a lot of the characters we see in Berlin's nightlife, people who live in this fantasy Rock'n'Roll world and use a lot of ridiculous hashtags.

We spent a lot of time on the vocals for this song – which is, of course, really draining and exhausting, but it really paid off. Throughout the song, we doubled Andreya's voice very subtly, so she had to do take after take after take, trying to sing exactly the same way as she did before. Digital editing would have probably made this one a lot easier! But we were all so happy when we finally got it and immediately knew it should be our first single.

Before we re-recorded this for the album, we had one version of this song that Laura recorded with Garage Band – and we really, really liked it. It had a lot of weird noises that came from doubling all of these cheap digital effects, but we tried to integrate this sound into our studio version as well. So we ended up shaking and bouncing Fender Spring Reverb Amps for the little “thunderstorm” in the beginning and the end of the song. This is also the only song in German on the album. We were kind of forced to write a German version to our song ‘Walnuts' in order to perform on a TV show called -Pfeiffers Ballhaus_. The concept is that young German musicians perform in front of old, retired people, but the condition is that the songs are in German. It was one of the funniest things we've ever done and the video turned out to be so funny because all the elderly people are ballroom dancing to our music. In the end, we really liked the German version and decided to put it on the album.

We both spent a year studying in the United States; Andreya studied in UC Santa Cruz and Laura studied at the University of Pennsylvania, so we were on opposite coasts. I think this year really inspired us both, musicially but also lyrically. 'Yosemite' draws from my flight over to the States. Andreya sat next to a professional climber called Dean Potter, who lived in Yosemite. After her year abroad she read on GMX News that he had died in a climbing accident. She never knew what to sing to this song, because it was more sad and dramatic than our other stuff, but that day the lyrics just came to her naturally.

So actually we already had the perfect recording of this song, which we did at the Hansa Studios in Berlin. We were sponsored by Converse to record there for one day, and we just went crazy: We played Timpani's, Hammond Organs, you name it, and we put it all on this song. Of course, the song ended up sounding way too grand, so we knew we could never put it on an album. Our other songs simply wouldn't match this sound and all those crazy instruments. But this session helped us so much and we put a lot of the ideas in there, only in alternative versions: Like we used an out of tune bassdrum instead of a timpani.

This is simply about being hungover and tired. Also, do you hear how fast the bass line is? That is played by our friend Florian from the band Snøffeltøffs! You can also hear his crazy bass skills on most of the other songs... except for 'Moby Dick', where Andreya played bass, and 'Diamonds', where Laura played a bass organ.

This song is about two Rollerskate Gangs (the “Chetaas” and the “Greasers”), so naturally we had to include a lot of gang vocals in it. It's inspired by movies like Cry-Baby, The Jezebels, and Whip It. The set up is very classic and we almost did no instrumental overdubs - it's also the most fun to play live.

The song started out as a sketched idea that Andreya brought into the practice space, which we never followed up on until the album. The two parts were first separate song ideas, the delay-y slapback intro was originally way slower. But together it works perfectly, and we even threw a hidden whispered message into the end of the song which you will hear when you listen closely.

This song was pretty easy to record because we knew exactly what it should sound like: It's such a classic, 60s garage song like 'Friday at the Hideout' by The Underdogs or someone. But then the lyrics are really modern and talk about a computer nerd who commits a lot of crimes on his computer, but he doesn't know it. Like counterfeit crimes, etc. We even have 'Siri' in the song, which hopefully won’t bring us any counterfeit problems.

This song was all recorded in one live take: Laura had to play the guitar and tambourine (with her feet) so Andreya could concentrate on singing which looked really funny. The song is about the Robert Altman movie 3 Women. Sissy Spacek and Shelley Duvall play the main characters - two young women that could not be more different from each other. One is very shy and nice, the other more like a maneater and girly. At one point they both become “Mildred” (originally Shelley Duvall’s character) - it’s kind of Kafka-esque… suddenly Sissy Spacek’s character takes over Mildred’s life or identity. This kind of melting of two people and two identities became the idea behind our artwork as well, where we are driving in a convertible and our hair merges together.

In My Head is out on Duchess Box on the 28 October 2016. For more information about the band, including upcoming tour dates, click here.

"They don't feel deferential in Ethio...