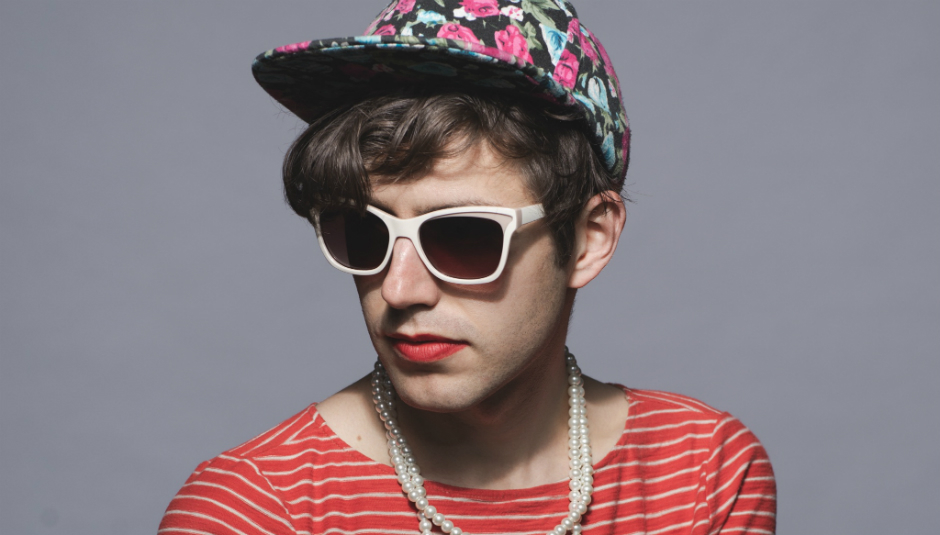 I’d been trying to lock down an interview with Ezra Furman for months, and we’d been bouncing back and forth on the PR machine. I managed to get him on the phone once, but he cut it short after 30 seconds for totally reasonable personal reasons. Another time I got offered an interview slot, but wasn’t available. Then I was away for a month, and then he was perma-nently on tour. Finally it came to pass that we were both going to be at End Of The Road in September, and I was scheduled some time with him on the Friday afternoon.

Except it didn’t happen again, thanks to a combination of ill communication and a leaky Phone battery. Was I gutted? Obviously. But the bit of me dealing with a belligerent hangover couldn’t help but feel guiltily relieved. What if the interview hadn’t have gone as I’d hoped? They say don’t meet your heroes, especially when you’ve had two hours sleep and got pupils the size of bowling balls.

Fortunately, over the course of that weekend I got to see him three times: his surprise cover set on the Thursday night, a surprise acoustic set, and his emotion-racked ‘proper’ set, closing the Garden Stage on the Saturday. And what became clear over the course of these three gigs was I was not only watching an artist showing off every side of his personality - the happy, the sad, the rad - but that he has quietly carved a niche for himself as a definitive rock & roll star for 2016.

The wider world - your writer included - locked onto him last year, with the release of Perpetual Motion People, his third album with his band The Boyfriends. His previous albums, including those with The Harpoons with whom he recorded between 2007 and 2011, had been closely indebted to garage-y rock & roll and the Velvet Underground; not a surprise when you consider Lou Reed is Ezra’s hero. Perpetual Motion People more readily adopted traits of doo-wop and soul, and songs such as ‘Lousy Connection’ attached radio-friendly hooks to relentlessly honest and smart lyrics like “The institution’s that I lean on have crumbled / I’ve got the world’s ear, I’m all fucking mumbles”.

Additionally, it was nigh-impossible to ignore that here was a man often seen wearing a dress. Of course, in 2016 this is verging on de riguer. Many of the world’s most exciting artists are razing the traditional codes of gender identity; whether it’s the transgender Ahnoni, Mykki Blanco’s gender neutral feminist punk rap, or Young Thug modeling females clothes for Calvin Klein and declaring “there’s no such thing as gender.”

Ezra describes himself as gender fluid - a term which, incidentally, just got added to the Oxford English Dictionary - that means he doesn’t identify with being a male or female. This is why sometimes you’ll see him in a dress and flashy pearls, and some-times he’ll be in skinnies and a t-shirt. He’s been unflinchingly honest regarding his battles with his identity, declaring in a blog for The Guardian that growing up he: “Felt imprisoned, as queer kids often do.” In the same piece he went on to say that: “This behaviour is not just part of an onstage persona, nor is it a gimmick to get people’s attention. Gender fluidity is very much a part of my life offstage, though I am still exploring what it means.”

Fold in a deeply religious upbringing - he's a practicing Orthodox Jew who has refused to per-form on Friday nights - and get we another fascinating ingredient in the big Ezra pie. You can imagine the confusions and dichotomous emotions he must have felt growing up feeling the way he did; regardless, he is staunch in his devotion to his faith, calling it a “force for siding with the oppressed,” which is brilliantly antithetical to many people’s stringent and often ill-formed opinions of organised religion.

His unflappability in confronting his issues in song – after living into his 20s feeling “paranoid about passing as sufficiently masculine“ – means that whatever he sings, we never doubt his honesty. Take this lyric from ‘Ordinary Life’: “One September in Boston / I lost the will to live / I was like an astronaut cut from the ship / Floating and ready to die.” These are words wrenched from the bottom of a sad man’s guts. That he then manages to turn that song into a song of hope, a song about being determined to not “bottle up and die” with a natty dilly-bob-sha-lang-lang chorus, makes it all the more captivating. Who wouldn’t root for a person like this?

But it’s not just all about him. After the shooting of Michael Brown in Ferguson in 2014, Ezra re-leased a grainy Youtube video of a song he wrote called ‘Ferguson’s Burning’. It’s lyrics are bru-tal. “The cops may stop shooting and the streets get less wild / But Michael’s Brown’s mother will never get back her child”. On his Twitter account he speaks out against Trump, about #BlackLivesMatter, and even in favour of saving a warehouse in Hackney Wick. Hitch a ride to his website and you’ll find a blog called A Guide For The Perplexed where he answers questions from his fans, many of them regarding their own latent gender or sexuality issues, and many of them clearly turning to him as a beacon of hope.

But this is the thing; yes he’s honest, yes he’s got a fascinating past, and yes a large part of lov-ing musicians is the myth behind them. But just as importantly – and without this the rest really fades into dust – is the fact he writes really fun, punky soul bangers. They’re songs you can dance to, drink liquor, take bad drugs and have thumpy, dry-mouthed sex to, should you so wish. But then underneath that, their depth also ensures they’re songs to dwell on, to decode, to play on loud on earphones on a sad train back from the house of someone you once loved. They’re fucking great.

“I’ve got a bright future in music, as long as I never find true happiness.”

This is a line from Ezra’s song ‘Watch You Go By’, from Perpetual Motion People. He sang it on the acoustic stage at End Of The Road, before which he described it as “one of the songs that I normally keep locked up in the basement”.

He doesn’t play it during his headline set the next night, but he does play almost everything else, and the level of devotion in the crowd is unreal, fevered. Unhinged. I see three different people crying; crying for him but also, of course, for themselves. Ezra himself looks overwhelmed by the end, hanging off his mic stand, mouth agape and pearls-a-swinging, kneecaps turned to sand in a sea of adulation.

In the aftermath he tweeted that “the energy at end of the road felt transformative”, and it did; a culmination, perhaps, of the journey he’s been on over the last how-many years (though his upcoming Roundhouse shows might see to that).

He finished on Jackie Wilson’s ‘Your Love Is Taking Me Higher’, and you could almost see the serotonin washing over that little Dorset field. Right then, I somehow felt glad our interview never went down; because instead I knew I’d have the unsullied memory of that moment, and hon-estly, it’s perfect.

As for Ezra: I don't know if he’ll ever find happiness. Really, does anyone? But watching him sing this old R&B standard through the stage light’s glare, there wasn’t a person on or off that stage who wasn’t drowning in joy,