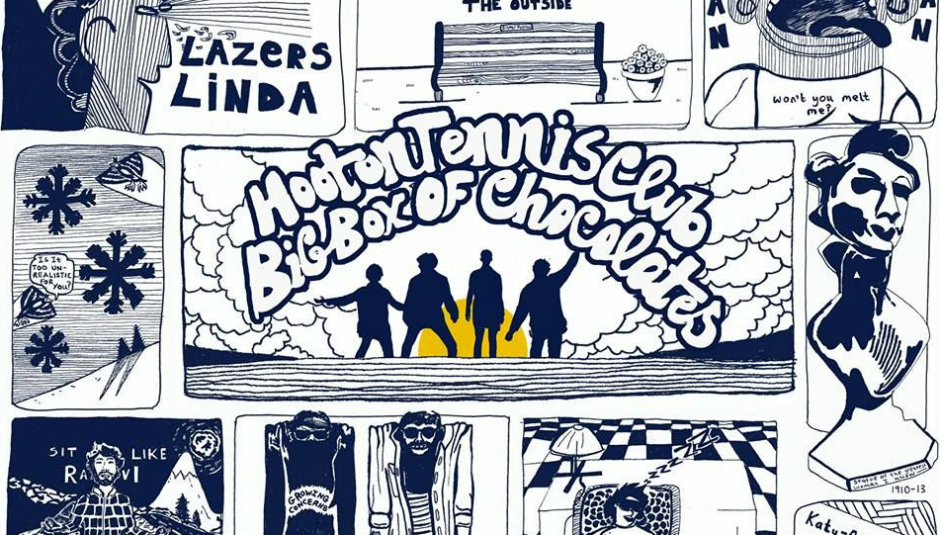 Merseyside quartet Hooton Tennis Club have crafted one of 2016's finest albums with Big Box Of Chocolates, their second long player. Released on Friday 21st October through Heavenly Recordings, Big Box Of Chocolates was produced by the legendary Edwyn Collins and follows on from last year's debut Highest Point In Cliff Town. Here, dual vocalists and guitarists Ryan Murphy and James Madden give us a track-by-track insight complete with some of the cartoon artwork that appears on the record's sleeve.

It's about being a nihilist. Typical existential stuff. The sample in the middle is James talking on the phone one evening on his way home. He was talking about someone hiking in the West Transylvanian Mountain range in Romania. There are also samples of dogs barking that lived on a farm close to Edwyn Collins' studio up in Helmsdale. The dog with the best howl was ‘Gaz’. The song was supposed to come across as feeling angry and confused and lost – trying to capture the anxiety felt by the twenty-somethings. James took the title from a local garden centre he used to live close to in London. 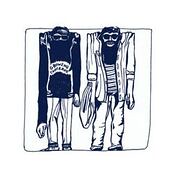 This is a song about some awkward guy at a party – short-sleeved shirt from Next, bootcut blue denim jeans, bit of a ket-wig... It’s supposed to be celebrating his nerdy awkwardness, but maybe it comes across as if we are taking the piss? We aimed to make a re-mixable beat that the Beastie Boys could sample; maybe they could use it? We can dream.

James had a powerful experience at a festival in Cambridge. Then he wished to God that he'd had a bad dream about it instead. Note the reversed Vibroslap sounds and Edwyn’s ‘Oohs’ at the end. Oh, and James’ subconscious ramble on bridge section whilst gazing over the clear blue waters of the Moray Firth. 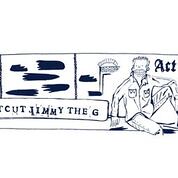 It's probably the most sentimental song we’ve written so far. It was written on tour whilst staying in Southern Germany in a 16th Century house. Have you heard of Neil Young’s ‘honey slides’ recipe? It’s supposed to sound like it has Indian influences, but it just turned out like a soft rock Hooton track. This track also features a sample of the ‘Garlic Mansion’ doorbell.

Ryan’s ex-flatmate Katy-Anne left the house (the ‘Garlic Mansion’) after a one year and three-month stay. It’s a mushy song about moving house and moving on, and then attempting to stay in touch. It’s purely non-fiction. It’s often easier to write ‘auto-biographically’, which may be why a lot of our songs mention people and places. 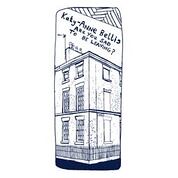 This song is about meeting the woman of your dreams at a party and then wishing you could just disappear into the floor because you don’t know what to say. At the same time, it’s about meeting someone you’d like to escape the company of. So there’s a weird dichotomy at play, perhaps due to the song being written about two separate experiences. Also, there’s a conscious effort to replicate Bowie’s vocal on ‘Starman’. Edwyn sings backing vocals.

Statue Of The Greatest Woman I Know

We attempted to capture the style of the jitterbug, jive, and boogie-woogie dancing, shimmy shaking of the late 50s and early 60s. Perhaps we took a slight left turn? It becomes a real workout live as we seem to think this track sounds better the faster you play it, especially on the drums! 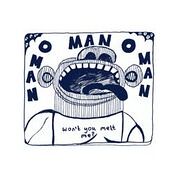 Meet Me At The Molly Bench

This is a song about a bench in Mollington that James and Ryan used to cycle to. It was a meeting place equidistant between their parents’ houses. The lyrics are about cycling around and being outside in the countryside. The ‘silver jubilee’ lyric comes from the fact that the bench wears a Queen Elizabeth commemorative plaque.

This song is about BBC Radio 6 DJ Lauren Laverne. It’s a tongue in cheek tribute to her and the station. Early songs by The Beatles were a big influence on this track: we tried to hark back to that pop sound and the sound of the 60s. 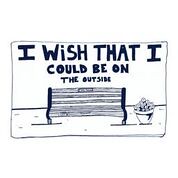 The title of this song came from James getting frostbite in Fen Ditton, Cambridge. The lyrics came to him whilst flying his Girlfriends Dad's toy plane one cold, frosty winter night. Prior to and whilst making Big Box Of Chocolates we were listening to a lot of Americana country rock like The Flying Burritos Brothers, Big Star, and Lee Hazelwood. When we came to record this song Edwyn suggested using his 1930s lap steel guitar.

This is a ridiculous song that we made because all of our other songs are mid-tempo. It's supposed to be a nod to Dizzy Miss Lizzy, but it turned into a psychedelic-wig-out with ‘laser’ synth effects. We know ‘lazers’ is a misspelling, but it's artistic licence, man. Song title attributed to Tommy C, inspired by ‘It’s Always Sunny In Philadelphia’. 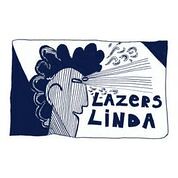 Ah, the last song on the album and the last song to be recorded at the beautiful Clashnarrow studio in Helmsdale. Our very last energies were released onto this track. Also, Ryan had an epiphany when looking over at the Moray Firth.

All A Boy Could Give: DiS Meets Marc ...