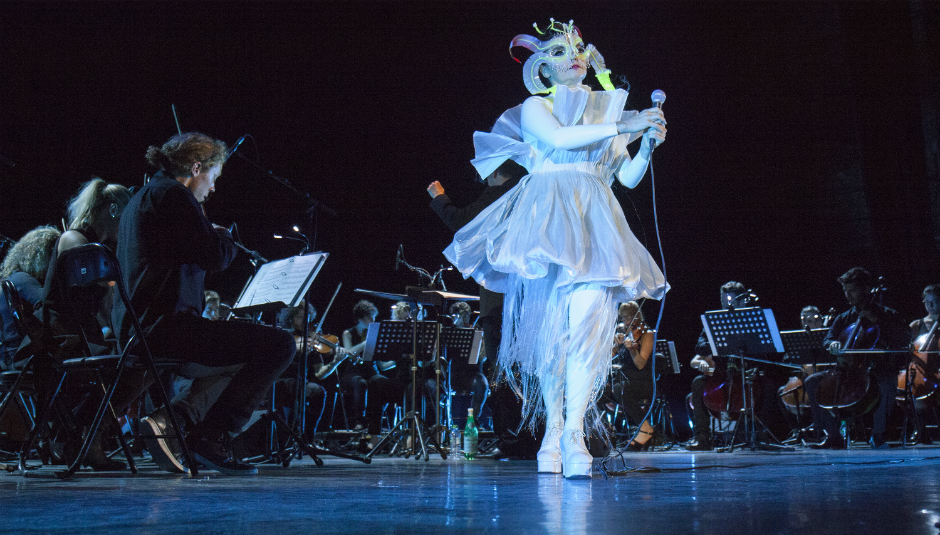 When Vulnicura came out last year, many people like me, re-established a connection with the Björk who had soundtracked a big chunk of their lives. Despite their exacting quality and futuristic appeal, projects like Volta and Biophilia felt as grandiose as they were intimidating, more like a collection of great ideas displayed in a museum than a pop record able to shake you to the ground. Then Vulnicura arrived and suddenly I felt taken aback, like the first time I listened to, say, Homogenic some 20 years ago. The connection between the two records has not escaped critics and fans: on the cover of Homogenic, Björk’s portrait had a warrior-like quality. On Vulnicura, to the contrary, it’s all about the titular wound; both records deal with love and devastation, and resort to strings and beats to signify the co-dependence between the two. Björk sure isn’t done evolving, plotting multimedia extravaganzas, educational apps, or re-packaging her landmark albums (a new box set celebrating her career is in the works and her Björk Digital exhibition is currently on show at Somerset House), but tonight’s gig at the Eventim Apollo celebrates emotions without necessarily resorting to the clinical or the futuristic. Accompanied by an orchestra (conducted by Andrew Gourlay), she relies on strings and her voice to guide the audience through a remarkably stripped-down and peculiarly nocturne set. Björk is not new to performing solely with strings, and fans will remember her recordings with the Brodsky Quartet or the strings-only B-Sides. Her piercing vocals are just miraculous alongside strings; always have been, always will - hands off.

The first half of the set is dedicated entirely to Vulnicura, executed basically in the dark, her firefly dress marking her movements on stage. The absence of beats and visuals makes space for the lyrics to astounding effect. While ‘Stonemilker’ and ‘Lionsong’ mesh into a long, lush introduction to the record’s narrative, her words on ‘History of Touches’ leave the audience absolutely speechless. If anything, we sound petrified. “I wake you up in the night / Feeling this is our last time together”. There you go, Björk backed by an orchestra spitting her most relatable lyrics ever in your face. ‘Black Lake’ is, quite frankly, devastating. It’s a shame most folks are not familiar with the structure of the piece, as the audience interprets every pause in between verses as a good opportunity to clap and cheer. No, dude: it’s a ten-minute song, enjoy the silence. “No hope in sight, of ember / Reckoning eternal pain and horrors / I am a glowing shining rocket / Returning home”. Now clap to that. The first half of the show ends on the notes of ‘Notget’, the most percussive and perhaps ‘histrionic’ moment for the orchestra. Prancing around the stage, Björk stops to place one hand next to her ear and invite us to join her singing the verse “Love will keep us safe from death”, to which you can only sing along to with a bit of incredulity, I suppose.

The second half takes off with the quiet resolution of ‘Aurora’, a very welcome cut from Vespertine, a record that was more about the leading up to love and true intimacy as opposed to the recurring images of destruction/reconstruction on Vulnicura. Things are kept relatively breezy with ‘I’ve Seen It All’ until the first song from Homogenic, ‘Jóga’, swoops in to make us teary again. The same happens with the classic epic ‘Bachelorette’ and, in the encore, with ‘Pluto’, an incredible surprise after the bucolic peak of ‘The Anchor Song’. “We have one more song, and maybe I will ask you to sing along”, says Björk. “What, on ‘Pluto’?!. More like ‘throat sing along’ you mean!”, I think. But we do, and as happens so often at her gigs, when it’s over, it feels at least 30 minutes too short. Which is quite the achievement for art so intense.