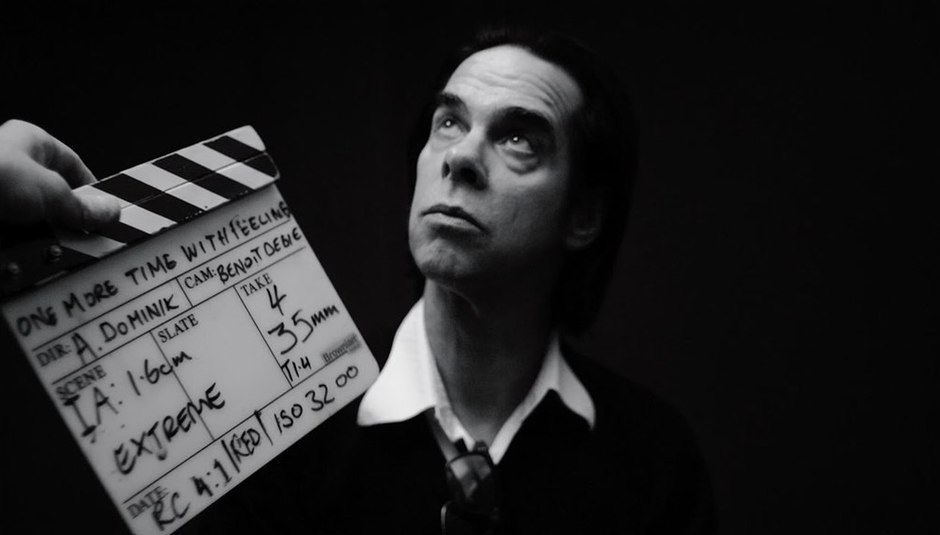 This is not a film review. I don’t know what it is or what this will become but sitting at this whirring laptop, feeling everything and nothing, all at once, I don’t even want to write this. I just want to throw my typing machine out the window. I already regret agreeing to do this... I want to do nothing until the dredging up of the hollowness you feel on the blackest of nights begins to fade. It’s far blacker than the new iPhone. A darkness that becomes faded into a bright white of pure nothingness (the overwhelming feeling of everything?) (No, nothingness). Beyond comprehension. Beyond bereft. A blackness that might be a billowing red flickering to the blackest blue…

I’m only writing this out of a sense of duty (free tickets don't come for free). Perhaps these words falling onto the page are also acting as a coping mechanism. To feel less alone inside my skull. To put it out there and feel part of something far bigger than myself, even just for a moment. To be inside your head. To wonder whether my heart beats the same thoughts around your brain. To play my part in the interconnected sadness that last night swept up you, me, and everyone you follow on social media. Suddenly I understand the reason why other people get so excited about uniting to discuss Kanye on a global scale - it makes you feel a little less alone.

Let’s get on with it. No spoilers (spoiler: they make a record and talk about the context and construct), but if you’re going through or have been through something similar, or are just feeling fragile, you definitely need a trigger warning. You won’t want to shoot yourself in the face after watching this movie - you can stick that on the poster.

However, this film will reconnect you with an all-enveloping melancholy. Or embolden it if it’s already there. I don’t really know how or why but maybe that’s also why I’m writing this. This misadventure into the mist of grief is made less unbearable by the presence of Warren Ellis, steering the ship away from the abyss with warmth and kindness. It should be everyone’s ambition to find that kinship in another human being. We all need a Warren Ellis.

There are no emojis that describe how you feel after watching One More Time With Feeling. No words either. Not really. There’s just this shadow over your heart and a blue hue falling through you. A fog. A rush of cold blood.

Loss. Real, true loss, is one of the heaviest hands life can deal anyone. It’s fucking shit. No polite apologies will soften the blow. People’s empathy never feels like it matches the way you feel. This inconsolable state is something One More Time With Feeling wrestles with from start to finish. It never quite pins it down. Then again, how could it? Grief is far too big to ever truly express let alone understand. And yet here I/we are, trying to do the impossible. In total awe that Nick Cave had even considered making this film or a new record, let alone opening a trapdoor to let us all peer in.

Cave's naked honesty permeates every minute of the movie. I had a favourite moment, which feels wrong, but it was when he talked about his response to those hollow and empty platitudes people sling at you. It reminded me of the grimace most mourners somehow hide in response to people's niceties - a dignity I’ve struggled to ever truly have.

Perhaps it’s a British thing or part of being human to accept the small-talk and that everyday transaction of sorrow. The more you hear how 'everything is going to be ok', the more you try not to be rude and transition straight to the angry stage of mourning. What do you expect them to say? What impact do they really think their words could have that a silent acknowledgement and a hug or filling your glass doesn’t also say?

You could do a degree in dealing with loss and still be an amateur at knowing which words will help. Most words feel like a hindrance to your head full of memories. You’re speaking to - or at - someone in a state beyond language. Beyond comfort. You know they mean well but all you want is for them to stop telling you what a 'great healer' time is or how you’ll see them in the next life or any of that well-meaning bullshit. You just want the earth to open up and spit the person back out. No words or days or distraction or the charade of idioms or attempts to apologise that life is above-all a cruel unknowable clusterfuck will soothe. You’re born. You live. Shit happens. You die. No matter how complex and complicated our lives may feel, we’re all just bumper stickers living between car crashes.

If you have never known this dark and seemingly infinite night of the soul, then I envy you. Sorry if I just sound like someone cursing at a cloud, but yet, after watching One More Time With Feeling, you will at least glimpse the abyss that lurks beyond the darkness.

An episode of The Osbournes, this isn't. We're living in a post-Paris Hilton world, where Kardashianvision and The Hills and Made In Chelsea, when JT Leroy’s story is back in your peripheral vision, Catfish, whatever the Labour party pageant to find a new leader is, and all those other ‘reality’ shows television is churning out, have all turned real-life into some artless drama. When it feels like reality is a lie. When life has become entertainment. That's when we need this because there's something about this documentary that is almost too real. It hits you in the gut twice as hard. Even though the credits mention that some events have been dramatised, absolutely nothing about it feels fake. It’s a naked honesty. A writhing truth that tosses and turns in the pit of your stomach. There’s a purity that aches to cut right to the bone. Through the bone. And keeps going. And it isn’t just that the back story of tragic loss and tabloid tossers set a tone where you fear that at any moment you’re going to turn into a sobbing heap.

Forget the fact it’s in 3-D. It's the narration that makes it feel like a film that reaches beyond the screen. It has its hands cradling your heart right from the 'gags' at the start. People really did laugh. That kind of nervous laughter that comes from relief. It was all a ploy.

It isn’t the fact that Nick Cave has always managed to weave the truest of emotions and potent words into the fabric of your life (who hasn’t been to a wedding lately where the first dance is ‘Into My Arms’?) that when he speaks directly to us (like the voice of some omnipotent God?!), it feels totally unlike Ferris Bueller or a Kevin Smith movie or Kevin Spacey or John Cusack. It feels very real. Almost too real. You feel alive and in some sort of intimate tryst where you wish you could just whisper something back that’s more helpful than "everything is going to be ok", or some other pathetic platitude. It's a helplessness that at times feels prurient. You should look away. Push back. Turn around. Walk out. Go become a better version of yourself. Help others. Build something bigger than yourself. Change the world… and yet you can’t look away. You can’t do anything but hope you’re about to understand the meaning of life in the face of a tragedy where everything feels numb. You feel pinned down, staring through 3-D goggles. Then you come home and you try to find the words. And if you’re me, you sit here evacuating your brain, hoping to find some meaning in the misery. You know it’s a masterpiece but saying so feels like a given. It feels like a trite journo cliche thing to say too.

Above all, you could say it was also a film about a man, making a record. A man well-aware that art is a folly, full of ennui, conflicted about how strange permanence and the process of capturing sound is. Not saying how no art will ever capture life. Or how art gives his life purpose. How music is more than just sound and poetry. How making this movie was possibly a bad therapy choice or maybe the best. When you’re at your worst, living in the void, nothing can be perceived as a truly bad idea.

It’s also a film that feels claustrophobic, soundtracked by the most beautiful death rattle (think Nick Cave at his best, with Scott Walker and Leonard Cohen shepherding him through the night), and yet it’s a film that’s unafraid to float above you and into space, reminding us how tiny and insignificant we all are in the grand scheme of the universe. Then again, knowing how small this pain should feel doesn’t make living on the shoulder of grief feel like anything but an all-consuming emptiness because really, for all that is captured in this film, and all that we make and do to try to make sense of everything, this is a film about the opposite of an epiphany. Much like the record released an hour after the credits finished rolling, One More Time With Feeling is a potent, vivid, harrowing movie. It's almost too ‘sad’ to use such a small word, but sad will do as a placeholder during a search for something that feels fittingly infinite.

Join the conversation about One More Time With Feeling and Skeleton Tree on the new DiS forums.