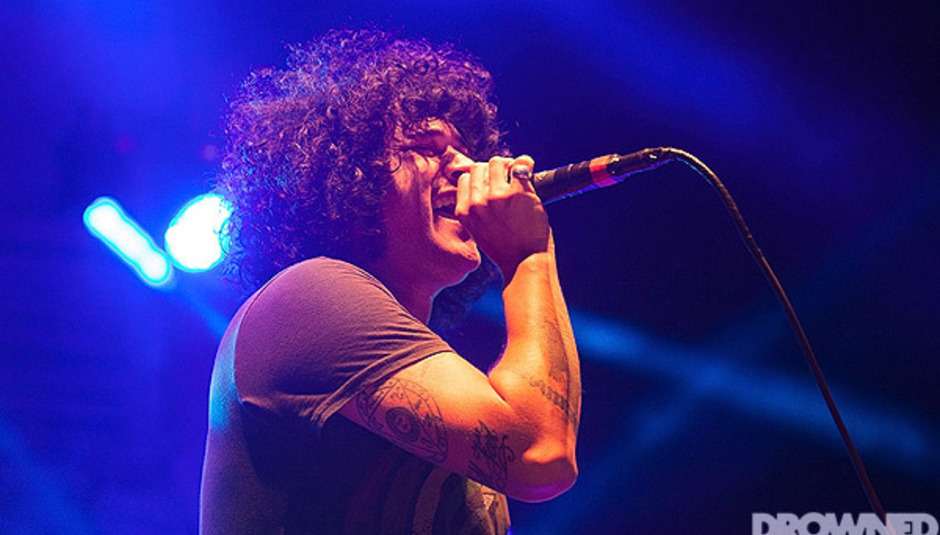 Next week, Drowned In Sound heads to the Danish municipality of Roskilde for one of the most prestigious and longest running festivals in Europe. Now entering its forty-sixth year, Roskilde Festival is also among the most unique of its kind, with its site, layout, and stages being created by over 20,000 volunteers. As well as regularly hosting a stellar line-up (more of which shortly), it also boasts one of the most unique food and drink experiences of any music festival in the world, with all of its produce being organic, locally sourced and prepared by some of the nation's finest chefs.

Traditionally taking place over the course of a full week, with fringe events running from Saturday 25th before the main programme begins on Wednesday 29th June. DiS will be in attendance and we've selected the ten acts we're most excited about seeing.

Having initially split in 2001, At The Drive-In's first reformation in 2011 lasted little more than a year before going their separate ways once more. So this year's second reunion provides an opportunity for Roskilde revellers to witness one of the finest live bands to ever grace a stage. Not to be missed under any circumstance, as this could be on of the last times messrs Bixler, Rodriguez, Hajjar and co perform together for the foreseeable future.

Chilean trio Follakzoid have established themselves as one of the most mesmerising outfits on the psych rock scene in recent years. Formed in Santiago in 2008, last year's third album - appropriately entitled III - showcased their musical dexterity and experimental nuance to the hilt, closely mirroring the intensity of the band's live show to boot. Playing just after midnight on Wednesday should be the perfect time for their
alluring presence to strike a chord or two.

Claire Boucher has emerged as someone everybody in the music industry wants to work with, whether it be in the guise of video director, record producer or musical collaborator. However, it's through her onstage persona as Grimes that she's become a household name. Last year's fifth long player Art Angels ranks as arguably her finest to date, and with a live show that's polished yet also unpredictable in a good way, her set at Roskilde is sure to be one of the weekend's main talking points.

Now the initial furore at LCD Soundsystem reforming after calling it a day five years ago has subsided, it's fair to say the shows James Murphy has played to date have been a resounding success, as anyone fortunate enough to have seen either of their two sets at last month's Primavera Sound will testify. Although no new material has surfaced so far, Murphy and band have done exactly what it says on their manifesto; shut up and play the hits. And with an arsenal of bangers as great as LCD Soundsystem have in their locker, what more could you possibly want?

Long time favourites here at Drowned In Sound. Anthony Gonzalez and his assorted band of cohorts crafted their own genre of sorts in the early 2000s, combining elements of electronic dance music with ambient shoegaze influences and a pop sensibility. 2005's Before The Dawn Heals Us and its successor in 2008, Saturdays = Youth, remain M83's jewels in the crown. And while this year's Junk took a more straightforward dance inclined direction, expect their set to feature a mix of songs both old and new garnered from an impressive back catalogue of untold riches.

Neil Young & Promise Of The Real

With a career spanning the best part of six decades, Neil Young needs no formal introduction. Best known for his work with Buffalo Springfield, Crosby Stills Nash & Young and Crazy Horse, not to mention his solo output, Young is a musician and songwriter truly deserving of legendary status. Last year saw him release his thirty-sixth studio album, The Monsanto Years, with Californian ciountry rockers Promise Of The Real, who will be backing him for his Friday night headline slot here. Again, predictably unpredictable, recent setlists have included a mix of classics from his impeccable back catalogue alongside more recent material off the last record. This has all the makings of being a highlight of the entire summer, never mind Roskilde.

Another band whose status as genuine innovators goes before them. Formed in 1980 out of the ashes of Joy Division after Ian Curtis tragically passed away, the Mancunian outfit reshaped the face of electronic throughout the decade and have continued to release groundbreaking records ever since. Last year's Music Complete, their tenth long player, heralded another reinvention of sorts and Saturday's headline slot on the Arena stage is sure to go off with an almighty bang.

Detroit's Protomartyr only came to our attention after 2014's second album Under Color Of Official Right but since then it's fair to say we've been hooked. Fusing angular post punk stylings with elements of noise and garage rock thrown in, frontman Joe Casey cuts an imposing figure while his three bandmates bash out an unholy racket around him. Last year's The Agent Intellect continued where its predecessor left off, and their live show is an unparalleled collision of passion, vitriol and energy.

If there's one word to describe Slayer it would probably be colossal. Colossal in terms of their impact on heavy metal, and colossal in terms of their still pulsating live show. 1986's Reign In Blood is heralded by many as the greatest metal album ever, and even thirty years on from its release, it's a statement that's difficult to contest. Only frontman/bass player Tom Araya and guitarist Kerry King remain from the original line-up - fellow guitarist Jeff Hanneman having sadly passed away three years ago. Nevertheless, their live show is still among the most ferocious anywhere on the planet, and Roskilde is in for an ear-splitting, headbanging, moshpit inciting treat on Wednesday evening.

When Smith Westerns split in 2014, guitarist Max Kakacek and drummr Julian Ehrlich didn't rest on their laurels. Instead, they spent the ensuing months putting together a new band, and in 2015 Whitney was born. Debut album Light Upon The Lake came out earlier this month, fusing lo-fi pop with melodies steeped in traditional folk and country. Although still in their infancy as far as live performances go, early reports have been positive, and this mid-afternoon set on Friday promises to be one of Roskilde's most eagerly anticipated.