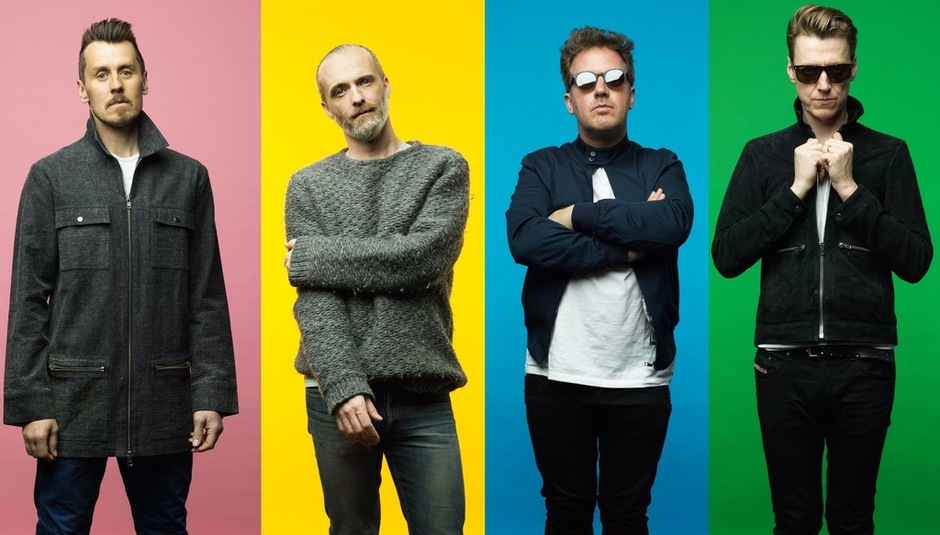 Travis Everything at Once Album Track by Track

Travis Everything at Once Album Track by Track

Written by Travis and produced by Michael Ilbert at the legendary Hansa Studios in Berlin, 'Everything At Once' is the brand new album from Travis. Here the band talk us through the new album, track by track...

Dougie Payne: I wrote the music for this one in New York. It started with the layered programmed synths and the bassline. Lyrically I had the first line and the melody but couldn't find a way to make the verse singable! So I walked around for about 3 months with that incessant melody going round my head trying to shorten the phrasing but I couldn't make it work. It was driving me slightly nuts so I went the opposite way and decided to pack as many words in as possible. As soon as I did that the lyric came really quickly. The nonstop overwhelming stream of words is a nice representation of what the song is about, while the chorus is the big release from that. In the studio Fran suggested that I sing the chorus to give it a different tone but also to make it possible to do it live. This is one of my favourite things we've done.

DP: This one actually started off in Glasgow as a kind of folky, finger picking acoustic thing. But I could only get as far as the verse and bridge and then I got stuck. So I left it to one side for a while. One night a few weeks later I was in London and I'd been listening to Bowie's drive in Saturday and got a bit obsessed with the 6/8 time signature. I started playing the 'animals' chords and melody in that rhythm and the chorus came out pretty much immediately. Words and all.

It's about the fact that for all our intelligence and human endeavour we should remember we're still animals.

Its a rock song but the lyric and the way Fran sings it gives it an emotional quality that gets me. The big guitar stops in the chorus were the key for writing it but we needed something in there for the recording and that's where Neil's gigantic stairwell snare comes in.

Fran Healy: For me the lyric on this is saying that no matter what is in store for me/us, no matter what will come, I'm ready for it. This started out sounding very different... I had pulled Andy in to overdub some guitars and asked him to play a melody ia was humming and as he was very hung over from the night before, he suggested I sing it... which I did and then the next day michael was out at the dentist and left the session open on his computer so i edited the intro which opens the record.

FH: Tim Rice Oxley texted me a song idea. It had a great bridge and a great title. A day earlier I had written a cool idea and wondered if I might shoe horn the bridge in and use the title. It all clicked.

FH: I heard the Breeders song Cannonball on the radio that day and came to the studio full of nostalgia and memories of the early 90's and all the guitar music coming out of America... this song touches upon this and the chorus apes the heavy guitar and feed back of Cannonball a bit.

FH: I recorded a sketch the night before and came to studio the next day but had forgotten my computer which it was on so I tried to recall the song and made a demo of it... the lyric touches on this current human phenomena of constantly looking at the screen and our growing dependence on and how we are somewhat paralysed by it. Preening for the screen like a Kardashian in all of these instagram and twitter pictures so popular today we are more connected than we have ever been and yet more disconnected from ourselves and eachother than at any time in history. I'm as guilty as the next. I think I was saying "Has anyone else noticed this??"

FH: This is a continuation of that theme. How we all have our head more and more in the cloud and less and less in the current moment so we don't notice things happening around us.

ALL OF THE PLACES

FH: This is a song about birth or death and how these two events make us behave in certain similar ways... Open all the windows, clear away the floor, look into the future now and all that went before...For love , all of the above." 2nd verse looks at how we obsess on all the bad news around and laments this fact... Again I'm as guilty as the next but I do think media focus too much on tragedy, because it sells but it's stressful to read all this shit... so I try to avoid tragic stories.

FH: This was the first song I wrote for the record and it set the bar for subsequent songs. I couldn't sing the chorus so immediately thought of Josephine who I had worked with some years ago and who I think is the best female vocalist in the uk who hadn't found the right song yet. I think she has now. I'm very happy with the middle 8 lyrics here. Some of the best I have written.

STRANGERS ON A TRAIN

Andy Dunlop: Started life from a recording on my phone of a railroad crossing in Sam Diego, I'd been obsessed with recording bells but this one had a particular rhythmic quality that defined the key and speed of the song. The second half of the song was written in a hotel room in Osaka during the last tour of Japan. I had the music and vocal for the end of the song and the title but got stuck on the words and melody for the first half so called in my good friend Ali Ingle to help out, he's a great writer and painted a brilliant picture with his lyrics. I love that the record ends with a call to arms for love.

Everything At Once is out on April 29th on the band's own label Red Telephone Box via Caroline International. 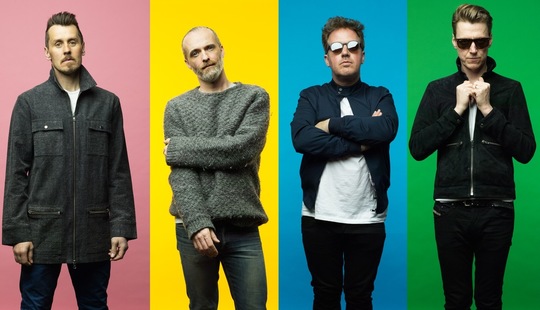 Album by Album with Tortoise

In Photos: Explosions In The Sky @ Ba...