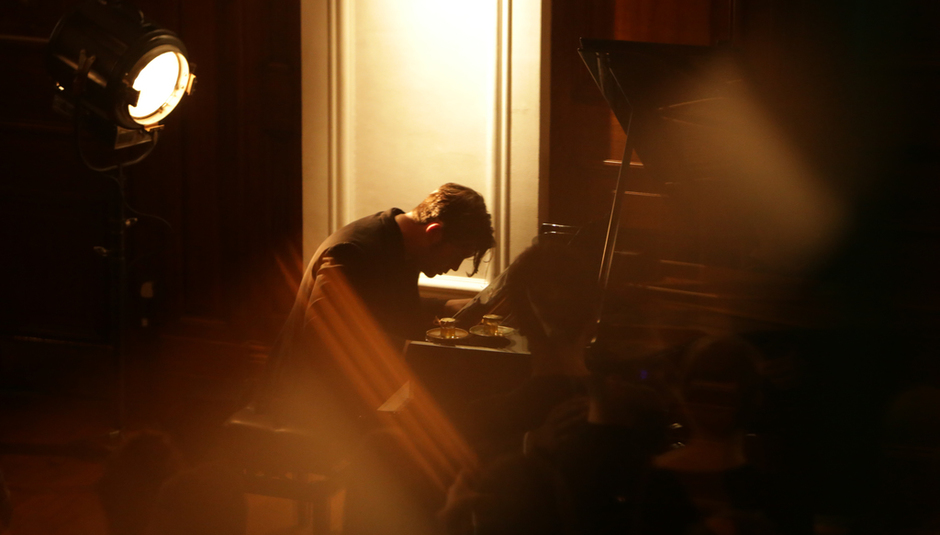 Last year, pianist and electronic composer Nils Frahm invented a new holiday called Piano Day. He dropped a surprise solo-piano record (he released some more music this year on pianoday.org), and announced plans to build an incredible piano. Just one year on, and the idea’s already taking hold, with events in celebration taking place all around the world.

In London, in the classy surroundings of a suite in Town Hall Hotel (at an event organised by Nils' PR, Sofia from Float PR, in association with DIS and Late Night Tales), everything is as elegant as you would expect from a day founded by Frahm. We’re even treated to an ongoing, improvised oil painting in the centre of the room, as the musicians play their sets. Ben Folds’ mid-90s project of excavating the piano as a rock instrument is buried again, at least for the time being. We enjoy a delicate programme showcasing the fundamentals of the instrument, as well as testing the outer edges of its technological and conceptual limits.

One of the nicest things about the evening was the rare opportunity to hear piano performed acoustically. In the high-ceilinged, wooden-floored room, this meant we could soak up the natural dynamics and reverberations of the instrument in a way which felt in the spirit of the day. Anna Rose Carter’s rolling cascades of notes and Ed Harcourt’s throaty, velveteen voice both swept across the space of the room deliciously.

Beyond the simple pleasures of remembering that a key strikes a note as loudly as you hit it, the night was also rife with innovation. Lily Hunter Green’s contribution was half performance, half installation, and a particular highlight. She’d taken a piano and filled it with bees (not the one she played this evening) as part of a project to highlight the problem of declining bee populations. She used it to compose music in response to the sounds the hive makes in different moods and states of wellbeing.

After treating us to a genuinely interesting preamble about the role of bees in the hive (as standard, their collective buzz is the note of A, by the way) she performed a beautiful piece with violin, inspired by the sound of a hive ready to swarm. We even got to sample of the piano honey.

The close of the night looked forwards, as we enjoyed Felix Faire performing an improvisation on the Seaboard – an instrument which gestures towards the future of the piano family. Creating live visuals alongside his sound, Faire ran his fingers across a plush, rubbery surface in a mixture of recognisable piano playing and something like touchscreen technology. Notes run into each other continuously; dissolving the distinction between individual keys. It was a fascinating insight into the possibilities of decades ahead; a route we’ll hopefully see charted over many Piano Days to come.

"I don’t have any delusions of grande...

"In London everybody's wearing a mask...