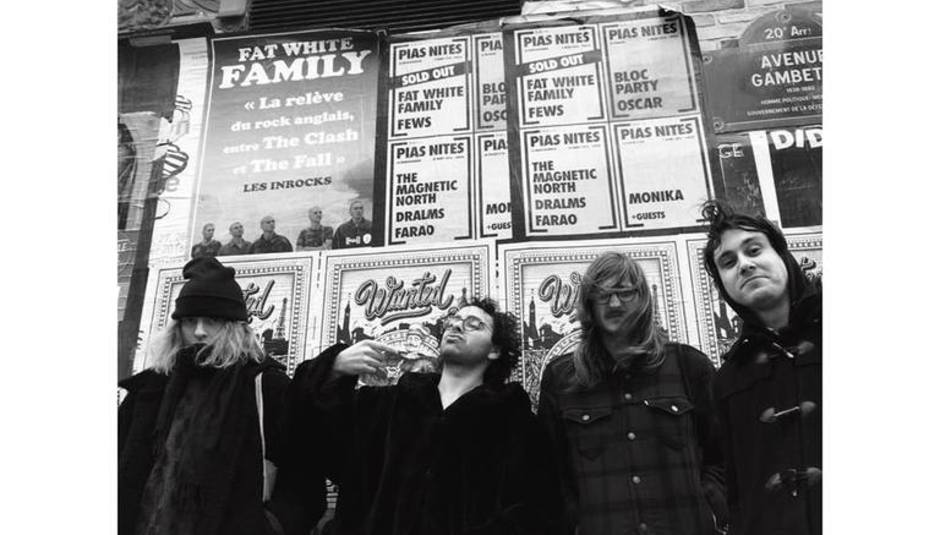 One of the undisputed highlights from January's Eurosonic Noorderslag were post-punk noise rockers Fews. Three cosmopolitan four-piece - guitar player and vocalist Fred originally hails from San Francisco, fellow guitarist-cum-singer David and drummer Rasmus from Malmo - are currently based in Sweden. While new bass player Jay - who's barely been in the band a week - lives on a boat in London.

They've just finished recording and mixing their debut album MEANS with esteemed producer Dan Carey, who also worked on last year's breakthrough 45 'The Zoo', their second single. Musically reminiscent of a no holds barred mash up between Interpol, The Walkmen, Diiv and A Place To Bury Strangers, they're undoubtedly one of the most exciting guitar bands to emerge in some time.

Having been on the road for the most part of this year already, DiS caught up with them prior to opening for Spring King's sold out show at Nottingham's Bodega venue. Aside from being genuinely surprised that anyone had heard of them, we found them quite enthusiastic about their time spent in the UK so far. So much so that they can't wait to get back!

DiS: You're currently on tour with Spring King. How's it been so far?

Fred: It's been great. Although the first show we did with them was probably the worst we've ever done. We'd just flown in to the UK from Copenhagen and David's guitar broke. He had his luggage checked by the flight inspection people and after they'd finished they weren't really careful. So they just packed everything in really tight and his guitar broke. They also destroyed his hard case to the point where we couldn't get his synth out so we were super stressed by the time we got to the venue for the show. It was one of those days where everything that could possibly go wrong did. But other than that, every single date except that one has been amazing.

DiS: What has the response been like from UK audiences so far?

Fred: Really really good. We're selling merch and vinyl copies of 'The Zoo' and loads of people have come up to us and asked if we have any other records as they've already bought that single. So that's insane.

DiS: The band have been together for a good five years through various line-ups. How did Fews start?

Fred: I met David through MySpace a long time ago. I used to live in San Francisco and I found his old band. I really wanted to join it but they were coming to an end at that point. So I said let's start our own project which we did. And then Rasmus joined on drums and our old bass player soon after as well. We've had three bass players already this year! Our original bass player left the same day we finished recording the album. He flew back to Sweden the same day.

DiS: Why did he leave?

Fred: He's still one of my best friends but he wants to do the normal things in life like buy a house, buy a car and have a family.

DiS: I guess it must be a struggle trying to earn a living in a touring band nowadays. Has there ever been a point where the rest of you have considered calling it a day too?

David: Every single day!
Fred: I don't know where I'm going to get any money from to pay the rent for this month.
David: Yet at the same time I don't think I could ever do anything else.
Fred: It's true. We get the biggest rush just being on stage. Then we get off stage and it's like... OK? What happens now? Does that make sense?
David: We were talking about it earlier. I really think that's why bands go mental and take loads of drugs. They need that extra kick they get from being on stage. But it is tough to tour. Fun but tough.

DiS: So how did current bass player Jay get involved with the band? Were you friends before?

Fred: No, we didn't know him.
David: Our friend Dan Carey knew Jay, and he knew we were looking for someone to play bass on this tour so he put us in touch.
Jay: That's pretty much how it happened.

DiS: How many shows have you played with Fews so far?

Jay: I think tonight was my twelfth or something like that.

DiS: Dan Carey produced 'The Zoo' and has also worked on your forthcoming album. How did he become involved with the band?

David: Somehow, he ended up with one of our tracks, liked it and said he really wanted to work with us. So we went over to London and into his studio for a day, recorded a couple of songs and it all started from there. We really like working with Dan. He's not only a great producer. He's also become a really good friend of the band.

DiS: Having seen the band play live and heard some of the recordings, what strikes me about Fews is that every song has the potential be a single. There's no filler in your catalogue. Was that something you consciously try to avoid when writing, recording and devising a live set?

David: I guess so. We had over thirty songs to start with before we made the album. Now we have ten that we believe stand out. We've scrapped so many songs along the way for one reason or another. We're constantly writing new songs all the time. It probably sounds cliched but it just comes natural to us.

DiS: Your next single '100 Goosebumps' comes out in April. What made you choose that particular song over the others?

Rasmus: It's one of our favourites.
David: Obviously we like all of the songs on the album but when we listen to it all the way through, that one stands out. For me anyway.

DiS: When I listen to your music I can hear traces of post punk bands like Interpol and The Walkmen, melodic shoegaze in a similar vein to Diiv and occasional bursts of noise comparable to A Place To Bury Strangers. Were any of those influences? Who else inspires you?

Fred: I'm a big fan of Interpol. And Diiv too.
David: But we're all really into German techno. Seriously! We listen a lot to that kind of thing. We've even incorporated it into the live version of 'Ill' which we'll be closing our set with later.

DiS: You're based in Sweden at present but do you see yourselves relocating in the future?

Fred: I hope so, yeah. If we can afford to. There's no real scene there. In fact, I can't even remember if we've ever played a show in Sweden.
David: I think we played in Stockholm once. But we've played far more shows outside of Sweden.

David: Stay true to yourselves. I do this because it's all I've ever wanted to do. Maybe I should stop this and live another life? But then even if I tried to I'd be really unhappy.
Fred: Say yes to everything!
David: Almost everything! Like when you order food. Do you want chips with that?
Fred: Yes!
David: Do you want any more of that?
Fred: Yes!

DiS: After you've finished the Spring King tour you're scheduled to play some dates with Fat White Family. What's next after that?

Fred: Festivals. Hopefully lots of them. So far we're confirmed to play Green Man and The Great Escape, but I think there's more to come.

David: Yeah. He's my hero. His personality is so electric. He just goes for it. We like eccentric personalities. People that are out of the ordinary, whether it be crazy good or crazy bad. That's also why we love to play live. Because we meet so many interesting people.

Fews debut album MEANS is out on Friday 20th May through Play It Again Sam Records.

For more information on Fews including future live dates and releases, visit their official website.

In Photos: Chairlift @ The Scala, London