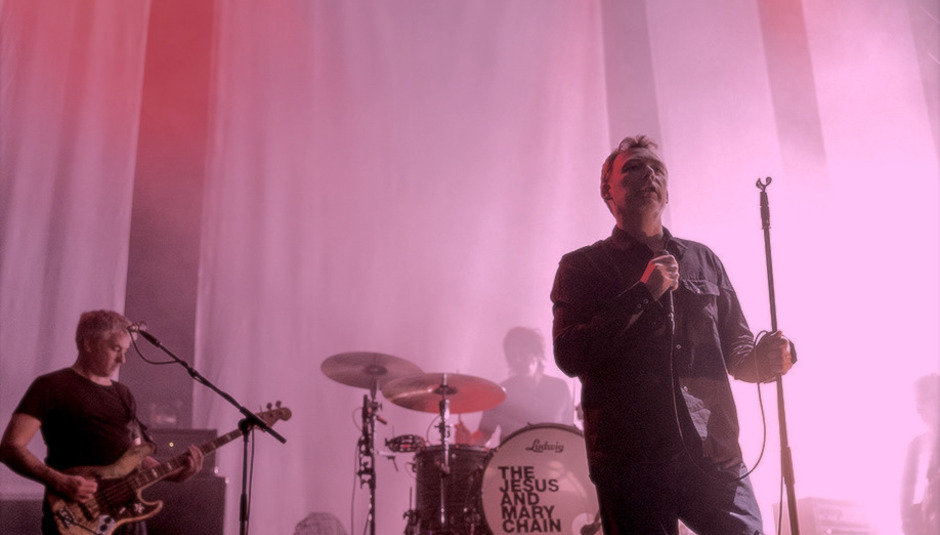 This coming Saturday (12th March), Drowned In Sound is off to Manchester for the third and biggest edition yet of Cosmosis, the city's psychedelic arts festival. Having first opened its doors in 2014 at Antwerp Mansions, the event has moved to a new location this year. Taking place at the Victoria Warehouse, better known as home to The Warehouse Project, this year's incredible line-up features some of the most internationally acclaimed artists in their field from the world of psych rock, shoegaze, post-punk and leftfield agit pop. Drowned In Sound will also be spinning tunes behind the decks on the Air Stage between 1730 and 1820 then 2300 until midnight so come and say hi if you get chance.

With so many incredible artists playing across five stages, clashes are inevitable but we've chosen ten artists we're excited about catching a glimpse of during Saturday's thirteen hour long extravaganza. The event kicks off at 2pm and finishes at 3am. Tickets are still available here at a cost of £71.55 including booking fee.

This legendary outfit need little in the way of introduction. Since releasing seminal debut single 'Upside Down' on Creation Records they were at the forefront of noise-fuelled rock and roll for the best part of two decades before calling it a day in 1999. Having reformed in 2007, they've spent the past eighteen months touring first long player Psychocandy around the world, a record that's still heralded as one of the finest ever releases to this day.

This San Francisco outfit combine the nuances of black metal with a delicate touch that owes more to early shoegaze bands like Slowdive and Seefeel. Having formed i 2010, they've put out three critically acclaimed albums to date culminating in last year's New Bermuda, a behemoth of sound that traverses several genres in its path. Expect a similar maelstrom of noise here that definitely isn't for the fainthearted.

This Italian duo channel expansive psych rock signatures through a relentless barrage of sonic overload and krautrock structures. Having put out their first self-titled EP in 2012, the band's debut album Neither Virtue Nor Anger finally dropped last year, amassing a wave of praise from various corners of the music press. Live they're an apocalyptic presence, and one that's sure to live long in the memory.

Local trio The Longcut first emerged in 2002, putting out first single 'Transition' two years later. Their experimental high energy fusion of grunge, electronic dance and power pop marked them out as one of the most innovative bands of their time, and while a series of releases followed up until 2010's Broken Hearts EP, they've been pretty quiet ever since. Cosmosis marks a welcome return to the live stage for the three-piece who will most definitely ensure no one stands still throughout their scheduled hour long set.

Another band that really needs no formal introduction. Led by the inimitable Anton Newcombe, The Brian Jonestown Massacre have carved out a reputation as one of the most consistent bands around since releasing debut album Methodrone in 1995. The current seven-piece line-up have been touring America and Australia in recent months so their welcome return to UK shores is arguably the most eagerly anticipated of the whole event. Not to be missed.

LSD And The Search For God

Formed in San Francisco just over a decade ago, LSD And The Search For God play expansive shoegaze tinged psych rock in the vein of Spacemen 3, My Bloody Valentine and The Telescopes. Their self-titled debut EP came out in 2007 and while they've been out of the limelight for much of the ensuing period, a new EP Heaven Is A Place came out on Deep Space Recordings in January of this year and is well worth checking out.

With a sound owing more to the scuzzy, garage rock blues sound orchestrated by The Cramps or The Birthday Party than archetypal psychedelia, they're a welcome diversion from many of the more traditional acts at this year's festival. Debut album Kicks came out last year on the Abattoir Blues label and follow-up Junk hits the shops this month. Arrive early to see what all the fuss is about.

Another one of Manchester's best kept secrets. Purple Heart Parade have been steadily earning themselves a reputation these past couple of years thanks to their incendiary live shows. Musically reminiscent of A Storm In Heaven era Verve or fellow early 90s experimental outfit Levitation, their expansive and atmospheric sonic palette is just what's needed to bring this year's Cosmosis to an outer dimensional climax.

Punk rock veterans who are currently embarking on their 40th year as a band. While three of the four original members still remain, Wire's music has constantly evolved, often ahead of its time in creative spasms that have confused and bedazzled critics in equal measures. Their 14th studio album simply entitled Wire came out last year with another new record scheduled for release next month. Another legendary outfit in their own right and one that should be given the time of day at all costs.

Hailing from the Lake District, The Lucid Dream have been busily honing their sound since forming in 2008, culminating in last year's breakthrough self-titled second album. With a live set that's as likely to take an improvised diversion as stick to the traditional setlist, they're a band currently at the height of their powers as new EP Bad Texan ably demonstrates.

The Cautionary Tales of Zachary Cole ...