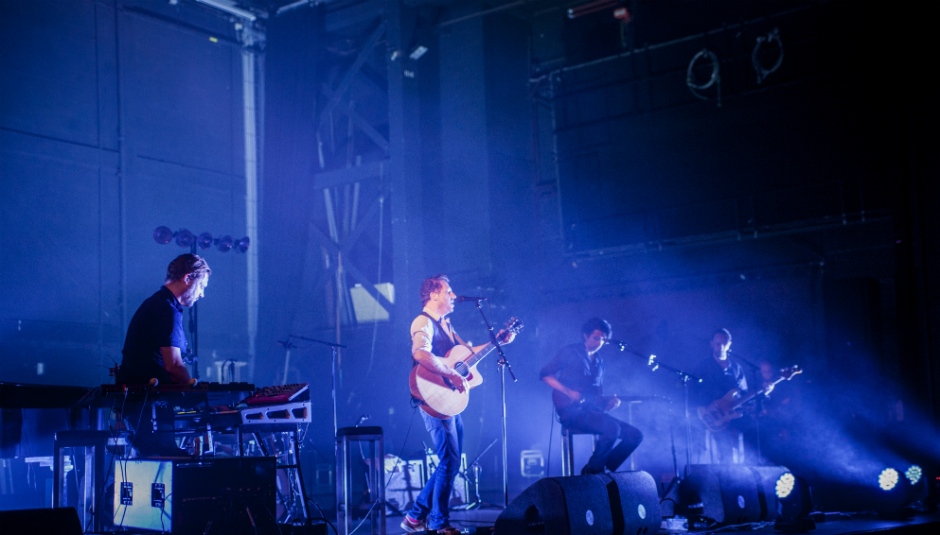 Think of your favourite band, and you think of moments. Moods. Times and places captured. You think of the way they inhabit a song, and a stage. Faces of friends and lovers flash through your mind, fragments of memories tumbling as you re-assemble them. Parties. Nights on the town. A life lived. For more people than you realise, dEUS are that band; 21 years and counting. Strivers. Survivors. A band of brothers just as perplexed with life as we all are. They’ve always found beauty and truth in the absurd, their quirky little vignettes – “Are you living in the night? Cos I can tell you have a lousy imagination” – confounding and delighting in equal measure; who else would choose to write a wistful, heartfelt ballad from a cad’s perspective?

And here they are, confounding again. This short, Soft Electric tour is a chance to revel in their quieter side; not stripped back versions of the classics, but songs that border on the skeletal in the first place. For a band who’ve always delighted in making joyous rackets sound melodic it’s a bold move, but they’ve got the chops, and more importantly, they’ve got the songs. Oh, such songs! They could easily be lost on this cavernous stage, adrift in the space above and behind them, but like the high chairs the band are perched on, they seem anchored, and radiate out in waves.

It’s not an Unplugged set – Tom Barman only occasionally abandons his battered Fender for an acoustic – but everything sounds gentler, a half-beat slower; like the music’s swimming through the haze of a dream. The guitars mesh together perfectly, a blanket that slowly wraps itself around your brain, while the drums are crisp but gentle, steadily nudging things forward. It’s a study in neat details too; Mauro Pawlowski plays with a measured, zen-like precision, all clean picks and arpeggios, while Klaas Janzoons, the original whirling dervish, tinkles away on various keyboards and a grand piano, his violin adding a few dramatic swoops and hums when required. And then there’s Barman, stalking around the stage, head cocked, listening. Directing. A glance here, a nod there. His voice – a warm, velvet growl, a few octaves lower than it used to be, but no less affecting – the thread that connects everything, by turns gentle, insistent, yearning.

But it’s how all that works together that lies at the heart of dEUS’ heady, seductive magic. The tension is prolonged, held taut as they meander through their back catalogue, and there’s a song from each of their seven studio albums here. Some build and build to a quiet climax, others set out as a lullaby and return as a paean to lost love and misfortune, but all utterly enchant. What did they play? The dazed sweetness of ‘Wake Me Up Before You Sleep’, ‘Secret Hell’, a dark little nursery rhyme with a line – “You should be haunting me” – that stabs like a dagger of ice, the cool, bustling “7 Days, 7 Weeks”, the charming swirls of ‘Magdalena’ and ‘Magic Hour’ and ‘Constant Now’.

Barman has always been at his best as the eye of the storm, so the pulse quickens when the band let things spin a little faster, a little crazier. ‘Bad Timing’, the only song transformed for this show, still thrills and scares, while the cacophony of ‘Dream Sequence #1’ grows menacingly through the lights and smoke, providing a fitting coda after two encores. Only a heart-breakingly gorgeous rendition of ‘Nothing Really Ends’, a Bacharach-esque, indie-lounge classic, hits the same heights, drawing tears and chills and deep, deep thoughts about love. “We touched the soul, the very soul, of what we were then / With the old schemes, of shattered dreams, lying on the floor”. Sadness never sounded better, or hit harder.

In this part of the world, dEUS are near royalty, and it’s a shame this tour doesn’t reach the UK. Really, you’re missing out. But go find them somewhere. Hunt them down. Let their wry commentary and weary wisdom lead you into the light. Tonight I meet a friend whom I hadn’t seen in seventeen years; it can’t be a coincidence she was present the first time my ears ever heard them. That circle of fate is now closed, but dEUS march onwards. We’re lucky to have them still.

Tickets and information about the remaining Soft Electric Tour dates can be found here.