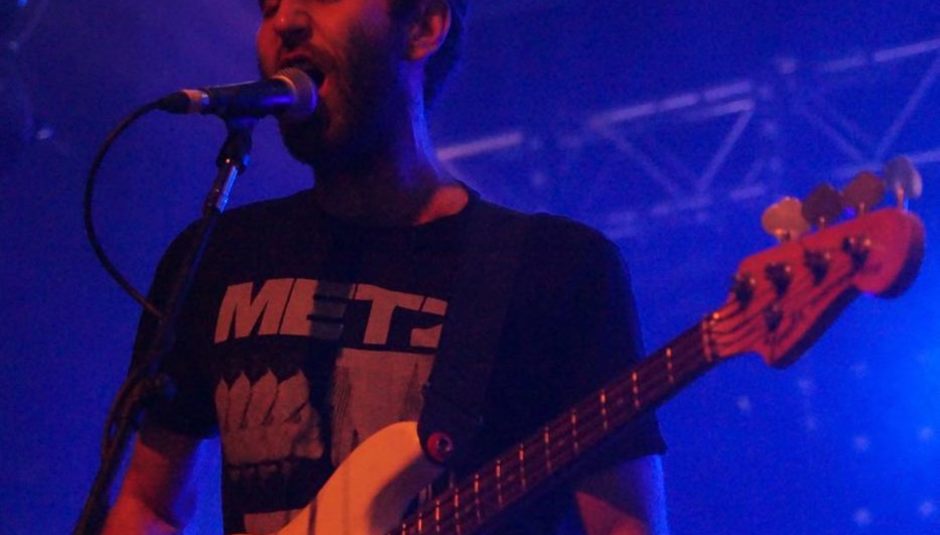 'We thought we should return to what we are good at and not be remembered as the people who nearly brought you Jabberwocky' states ATP founder Barry Hogan in the official programme. And while it will be difficult to erase that non-event from memory or heal the wounds (and bank balances) for those punters still waiting for ticket refunds and bands still to be paid, it would be a crying shame if it were to become ATP's long lasting legacy. Because when all's said and done, ATP set the benchmark at its inaugural Mogwai curated event 15 years ago and has been responsible for some of the finest bills both at home and abroad ever since.

And while their public fall out with Butlin's culminating in 2013's double header 'End Of An Era' literally spelled the end of an era both in terms of location and those legendary weekenders. Until now, when it returns to a new location of the less salubrious Pontin's - imagine being trapped in a timewarp where 1979 is the future and prefabricated accommodation is the norm - in the North Wales seaside resort of Prestatyn. This year's Nightmare Before Christmas event curated by controversial visual artists Jake and Dinos Chapman might not have featured as many big names among its line-up as previous years but more than made up for it in memorable performances.

Granted, things don't always go to plan. Lower than expected ticket sales (estimated to be somewhere around the 1000 mark of the 2800 originally on sale), overzealous security staff, limited food and drink options and the cancellation of Micachu & The Shapes due to 'the terms of our festival agreement not being honoured' (their words not ours) cast the odd shadow here and there. As did the alarmingly high police presence throughout Friday which included stringent vehicle and bag searches on arrival not to mention the strange sight of fully uniformed coppers standing in line at the back of the Secret (second) stage throughout most of the day's proceedings. What they'd have made of Xylouris White's lute'n'drums noisefest or Suuns & Jerusalem In My Heart's mystical psych rock is anyone's guess, but one thing's for sure. Their presence didn't stop those out front having a whale of a time.

On arrival, DiS stumbles across Loop's soundcheck upon collecting our passes. Whether Robert Hampson's expletive laden rant at his bandmates towards the end provided a motivational kick up the backside is open to debate, but what wasn't without question was their dynamic and pulsating set during the early hours of Saturday morning. Even if the proposed encore of 'Breathe Into Me' and 'Collision' never happened, probably due to time constraints more than anything else.

Earlier, we find ourselves spoilt for choice not to mention being treated to some of the finest sets of the entire weekend. Chicago trio Dead Rider's unholy mix of psychedelic rock, funk and experimental jazz reminds us of a more leftfield Cold War Kids. That their bass player calls himself White Christmas and drummer goes by the name Snake Hands proves a winner too, not to mention the latter's incredible beastlike skills behind the kit that fluctuate somewhere between Keith Moon and Animal from The Muppets. Chelsea Wolfe is something of a revelation too, her industrial and occasionally anthemic tones placing her in a similar realm to St Vincent or Zola Jesus. ATP stalwarts Lightning Bolt also provide the most fun set - perhaps unsurprisingly - of the day if not the whole weekend. While the two Brians - drummer Chippendale in customary mask - kick out an hour's worth of uncompromising rhythmically tuned noise, the largely assembled throng take great pleasure in beating the living daylights out of each other. Which doesn't seem to go down well with the security staff, whose mood changes from bemusement to anger at the drop of a hi-hat cymbal.

However, it's left to Canada's (not for the first time this weekend) Viet Cong to steal Friday's show. Which they do with startling aplomb. Veering somewhere between Eighties alt rock (those Hüsker Dü comparisons are difficult to avoid) and early Noughties metallic punk, frontman Matt Flegel (main picture) cuts an imposing figure. Drummer Mike Wallace also impresses, mainly as the driving force behind songs like 'Bunker Buster' and 'Death', which while being exquisite on record, take on a whole new meaning in the flesh here.

By Saturday, the already treacherous wind and rain has escalated to a whole new level, which again makes us thankful for indoor festivals. On paper (to these eyes and ears anyway) the weaker of the three days, today's electronic heavy line-up still throws the odd previously unknown gem in our direction. Like Montreal's Avec Le Soleil Sortant De Sa Bouche for instance. Their early afternoon set on the Secret stage might not have raised too many eyebrows to begin with, but by the end the whole room is dancing vigorously to their glorious kraut/funk hybrid that recalls Frank Zappa fronting Funkadelic or a slightly heavier Goat. Suitably impressed, DiS heads to the merch stand straight after and picks up a copy of their Zubberdust! LP. We wholeheartedly recommend you do too.

You may have seen the film 'A Band Called Death' about the Detroit trio of the same name. Having initially formed in 1971, their appearance here represents Death's first ever show in the UK, and with charismatic bass player-cum-vocalist Bobby Hackney leading the charge, are well worth the 44-year-wait. Playing a mixture of songs both old and new, it's closing statement of intent 'Politicians In My Eyes' - undoubtedly an influence on the US punk rock scene of the mid to late 1970s - that invokes the day's first moshpit. Vision Fortune's intense techno assault revels in its variation. Occasionally drawing inspiration from the new breed of psych rock (MJ from Hookworms mixed their excellent debut LP Mas Fiestas Con El Grupo Vision Fortune) before delving into the annals of Channel One via ambient drone soundscapes and sophisticated electro respectively.

Nevertheless, it's left to Canada to take centre stage again. Not once but twice. Having released the excellent Sun Coming Down earlier this year, Ought are a revelation thoroughly deserving of the mostly gyrating crowd assembled out front. Awkward-looking frontman Tim Darcy sits somewhere between Bradford Cox and Hamilton Leithauser in the way he conducts himself on stage. Nevertheless, 'Beautiful Blue Sky' is simply breathtaking while the hauntingly polemic 'Habit' instills a feeling of serenity when it's needed to this most hyperactive of audiences. Fellow Montreal outfit Braids also prove they're not just masters when it comes to making records. Playing a set largely culled from career highlight (to date) Deep In The Iris, Raphaelle Standell is a captivating focal point both visually and vocally. Ending their set with a triumphant 'Miniskirt' that owes as much to shoegaze luminaries Cocteau Twins as it does the current crop of ambient pop sensations, they're an undisputed high point on a day where machines take over from hereon in.

With Sunday's card being the most appealing, Portuguese four-piece Paus give our dancing feet their first outing of the afternoon. Comprised of two drummers alongside the standard guitar and bass, they're eerily reminiscent of those early Battles shows in the mid 2000s when Mirrored briefly redefined the rock/dance crossover. Having briefly decamped to the Krautrock Karaoke (no, seriously!) to hear 'No Fun' and 'Hallogallo' performed at varying levels of quality, our return to the Pyewacket (main) stage is greeted by the arrival of Chilean psychedelic outfit Follakzoid. Already favourites of the psych rock scene, their insatiable set which blues from blues to rock then ambiguously back to trance in an instant proves both soothing and mindblowing at the same time. Loose rather than formulaic and improvised in parts, they're an invigorating watch not to mention incredibly accomplished musicians.

ATP founder Barry Hogan comments earlier that it's taken him five years to get Total Control over to the UK and the Melbourne four-piece deliver in style. Sounding like refugees from the first wave of Mute Records augmented by the visceral tones of vocalist Dan Stewart. There's a stark contrast between songs like 'Expensive Dog' and 'Flesh War' but one that compliments the other well throughout their sprightly set. Both Younghusband and Iceage struggle to live up to their billing as pre-festival unmissables. Although the former's Sixties flavoured psychgaze is pleasant enough, it lacks bite compared to most of what's gone before while the latter might remind us of the Danish Birthday Party with every passing show, they've a tendency at times to play to themselves rather than the surprisingly sparse crowd.

Or maybe being stuck either side of the mighty force that is Thee Oh Sees doesn't help. Playing before quite possibly the biggest turnout of the weekend, their set is a provocative, occasionally confrontational but utterly satisfying melange of garage punk, noise rock and rhythm and blues. As another crowdsurfer goes over the barrier, it's clear certain members of the security team are out of their depth and when one fracas too many breaks out - this time involving a female audience member - mouthpiece John Dwyer threatens to pull his band from the stage unless she's allowed back in and the security team restrain themselves. Eventually parity is restored, with the band's raucous set arguably the talking point of the weekend from a musical perspective rather than the unsavoury incident within it.

This time last year, Courtney Barnett was on every 'ones to watch in 2015' list. What a difference a year makes. Despite having a critically acclaimed album in the bag, her ascent to headline status may have raised a few eyebrows prior to this evening. However, the doubters needn't have worried. Barnett and her band - drummer Dave Mudie and bass player Andrew Sloanes - play a set deserving of bill topping status. Casually throwing away breakthrough single 'Avant Gardener' at the outset, there's a celebratory air about her performance even when delivering slightly numbers such as 'Kim's Caravan'. Closing couplet 'Nobody Really Cares If You Don't Go To The Party' and 'Pedestrian At Best' bring the house down on a momentous show that serves as our finale before hitting the sack.

While this ATP wasn't quite up there with the likes of those curated by My Bloody Valentine or Matt Groening from days gone by, it's near flawless musical policy is to be admired. And with a little fine tuning before next April's Stewart Lee curated shindig, those grand days of yore could be just around the corner.

From Cervezas to Muse to Pyramids: A-...