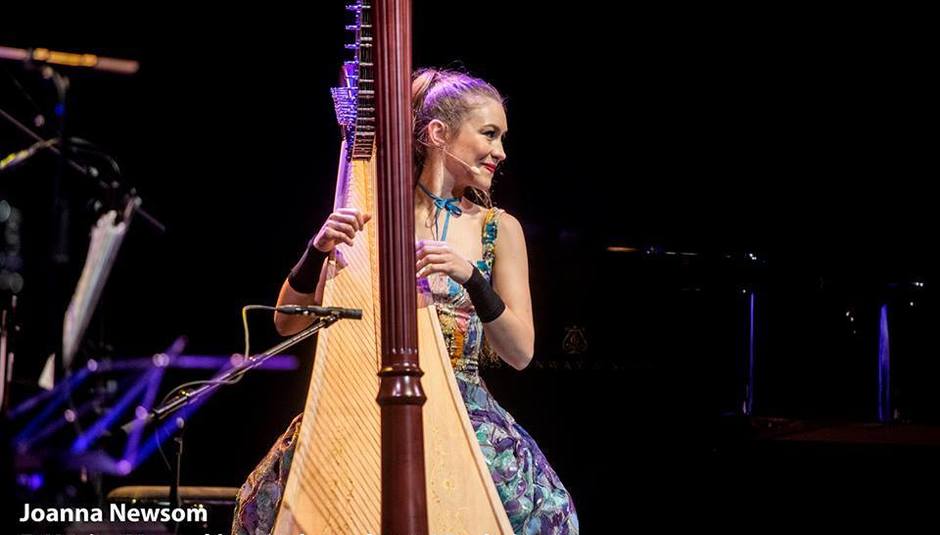 There is a moment of confusion about halfway through the show this evening, Joanna Newsom’s only Spanish date on a short European tour to promote her stunning fourth album, Divers. “You what now?” she asks her brother Pete, who is gesturing at her from behind his drum kit, stage left. “Ah,” she sighs, feigning exasperation as she removes herself from behind the harp to take position on keys for new cut ‘Goose Eggs’. “This is a professional rock concert,” she tells the crowd, before lamenting the difficulties of playing her primary instrument while wearing a long, floaty dress. Later she apologises for the deafening screech of noise that wells up during ‘Leaving the City’ - and also “for the feedback.” She is, in short, utterly charming, with a fine line in self-deprecation. “Folk harp song!” she announces, before launching into ‘Have One on Me’. It is a folk harp song, I suppose, but it’s a rich, segmented, hugely audacious one. It sounds, as all of her songs do this evening, magnificent.

Which is, hopefully, not to fall into the trap of blind worship that Alexis Petridis considers in his review of her previous show for the Guardian, in which he gently chides those who noisily pledge their devotion to the singer between songs and “gasp in wonder” upon certain tunes’ opening bars. There is some gasping in wonder going on tonight, but then these songs warrant a hearty response; unfurling slowly and surely and with eminent purpose, they hold their audience rapt, and the new material - some of which receives only its third live outing this evening - is uniformly fantastic.

Newsom is a warm, easygoing presence, and during the likes of ‘Cosmia’ or ‘Monkey & Bear’ - or any of these songs, really - her virtuoso talent on the harp and piano is a thing to behold: the sparring melodies she conjures while delivering sprawling, tricksy verses atop them have so long been part of her style that it’s easy to take for granted quite what a uniquely gifted musician she is. Long-time collaborator Ryan Francesconi and violinist Mirabai Peart complete the ensemble alongside the Newsom siblings, all shifting between various instruments, their contribution invaluable. Francesconi and Peart also play as a duo, and the latter’s occasional backing vocals are particularly gorgeous. (Newsom is quick to highlight the fact that the pair are returning to Barcelona later this month for a show with Alela Diane. She does so again during the encore, despite the fact that nobody can remember the venue, also thanking Alasdair Roberts profusely for joining them on the road.)

The show is nearly two hours in length, bookended by songs from her debut The Milk-Eyed Mender (that’s ‘Bridges and Balloons’ and ‘Peach, Plum, Pear’, respectively) and traversing the rest of her discography in between. ‘Anecdotes’, ‘Divers’, ‘Waltz of the 101st Lightborne’ and ‘Time, as a Symptom’ (which closes the main set) are glorious, while ‘Saponikan’ is outrageous; the high-wire theatrics of its final third genuinely dazzling, the pitch of Newsom’s voice aiming for - and reaching - the stratosphere. Sometimes, as the band hit crescendo, the downward strike of Peart’s bow perfectly matches the limbs of Francesconi and the Newsom siblings. It brings to mind a performance by Explosions in the Sky around a decade ago at the Thekla in Bristol, during which the band swayed and rocked in hypnotic unison to the squall emanating from the speakers. The Texan group do tend to do that when they hit their stride, but the lack of a light show that night made the sight all the more effective. Nor is there one this evening for Newsom and her players, all the better to simply watch and marvel - and indeed, gasp in wonder - at the breathtaking intricacy present; how well the group gel given the complexity of what they’re producing; the emotional clout therein. When they leave the stage for the first time it’s to the tentative rising of the theatre to its feet. When they exit, beaming, following an encore consisting of a superlative ‘Baby Birch’ and ‘Peach, Plum, Pear’, there’s nary an audience member still seated.