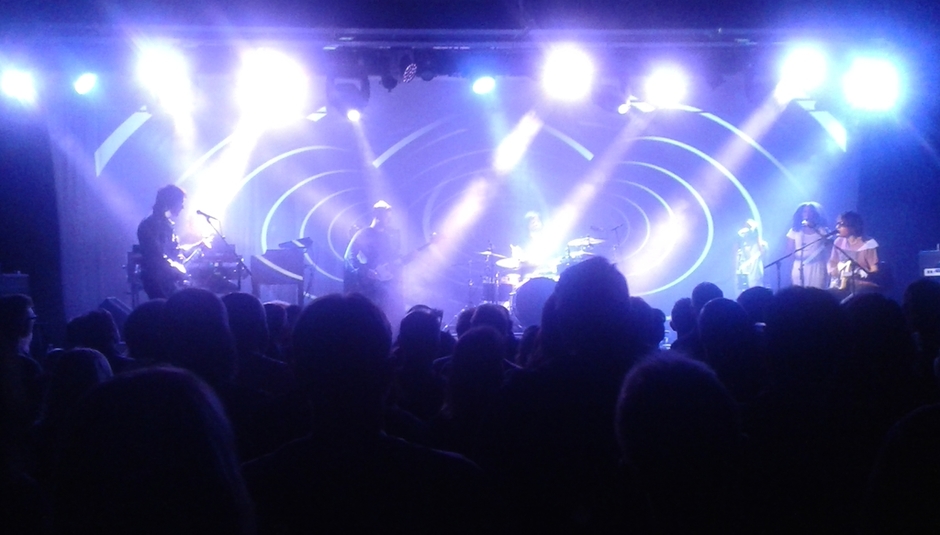 When Billy Butlin opened his first holiday camp in 1936, he probably didn't bargain for them being settings for weekend long music extravaganzas. Originally created for working class families to participate in affordable seaside holidays, Butlins has become something of a British institution. While only three of the original ten camps remain, it's still regarded as a rite of passage for young families seeking to "get away from it all" every once in a while.

So we're here in Bognor Regis for the inaugural year of Rockaway Beach. Set in the grounds of the West Sussex town's Butlins site where 55 artists will perform across three stages over the second weekend of October. While All Tomorrow's Parties and the various Butlins Weekends may have started the ball rolling years ago in choosing the traditional holiday camp as a host for live music, it could be argued that the organisers of Rockaway Beach have come up with a better line-up than any of its competitors have mustered in recent times.

Unsurprisingly, there's an element of the surreal about it all. With its aquatic theme - the two onsite hotels are named Ocean and Wave cost over £40 million in total to build. While every lift in the building comes complete with its own nautical background music (we hear The Beatles 'Octopus's Garden' and 'Yellow Submarine' along with the theme from Hawaii Five O while the Jaws theme accompanies the doors opening), there's signs around the place proclaiming "We make fish puns for the halibut" and such like. Elsewhere, perma-smiling staff greet us as though we're royalty while towels are folded into the shapes of animals (elephants and swans being the most common). Of course it wouldn't be a weekend away without the obligatory hen party, and we spot a group of girls in Playboy bunny ears and 'L' plates. Upon asking them why they chose such an event to host their party, one of them replies "We thought it was an 80s weekend when we saw Echo & The Bunnymen and Johnny Marr on the poster. But we've just seen this band called The Fall and they were fucking shit! Have you got any drugs?" Cue exit.

Ah yes, The Fall. More from them later although when we're informed by an event "insider" that Mark E Smith's rider consists of 64 cans of lager it's no surprise to see him in a fairly intoxicated state. Before their set, Glaswegian outfit The John Knox Sex Club and noise rock stalwarts The Telescopes turn in showstopping performances of their own. While the former's haunting take on Nick Cave inspired folk serves as a gallant opener to the weekend's festivities, the latter's run through recent album Hidden Fields from start to finish takes on an intensely hypnotic feel.

Upstairs on the Centre stage, Emma Pollock's captivating brand of lo-fi folk provides a soothing antidote. Coupled with a level of on stage banter that's befitting of such a setting, her set adds a wistful charm to proceedings. John Robb's Membranes have enjoyed something of a resurgence in popularity recently, and with a set that's largely made up of material from recent long player Dark Matter/Dark Energy, it's easy to see why their errant post-punk is one of the festival's biggest draws in terms of audience numbers.

However, it's The Fall that induce the first queues of the weekend. As Mark E Smith and co. take to the Reds stage, there's already one-in, one-out in operation on the door. Songs from this year's Sub Lingual Tablet merge incandescently with material culled from its predecessors Re-Mit and Your Future Our Clutter. At one point Smith disappears round the back of the stage altogether, out of sight yet still ranting away down the mic. When he returns the microphone is passed into the audience where one punter continually screams "Victoria!" until the apparatus is returned to its rightful owner. Closing with a rampant 'Theme From Sparta FC', the slightly intoxicated frontman looks distinctly happy with himself but then the several hundred Fall fans squeezed in here can't all be wrong.

Echo & The Bunnymen are also on top form, playing a hit laden set that has the Centre stage swinging and swaying intently throughout. Indiepop trio Flowers aren't your typical post-midnight festival band, yet their summery jangles coupled with Rachel Kennedy's extraordinary vocal sees them win hearts and minds aplenty. It's left to Astral Pattern's dreamy electronica to bring the first day to a close. Coming on like a less-intense Factory Floor, their opulent techno owes more to 1970s Dusseldorf than their native London and is all the more enticing as a result.

The next day, Fever Dream's intoxicating fusion of noise and dream pop sets the scene for the rest of the day. Nevertheless, an uncharacteristic burst of October sunshine coupled with the mouthwatering prospect of ticking off football ground # 133 on yours truly's list makes this afternoon's FA Cup qualifier between Bognor Regis Town and Oxford City a welcome diversion. Upon returning to the festival site, Chichester based shoegaze outfit Orange Yellow Red display their humble side, clearly gratified at being asked to play the only credible music festival in their neck of the woods.

Ghostpoet wows a Reds stage that's full to bursting point, while Nadine Shah brings a touch of class and elegance to the Centre stage. Recalling Dry era PJ Harvey and Siouxsie Sioux at her most feverish, her set is an endearing delight and one that stands out among Saturday's bill. With all three stages now running later than scheduled, any pre-made plans become a bit of a lottery from here on in. Headliner Johnny Marr may hold legendary status for his guitar virtuosity - and deservedly so - but lead vocalist he most definitely isn't. Mixing songs from this year's Adrenalin Baby long player with choice cuts from his back catalogue isn't exactly unexpected (although a bizarre cover of The Primitives 'Crash' does raise a few eyebrows). That guitar hook to 'How Soon Is Now?' still makes the neck hairs rise to attention, as does a resilient 'Panic', even if Marr's slightly off-key vocal causes one wag to scream "Hang the singer!" loudly back at the stage mid outro.

The abstract noise emanating from Gum Takes Tooth's dissonant electronica might not be to everybody's cup of tea, but here post-midnight in the salubrious surroundings of the Reds stage it works a treat. The duo's distinctive fusion of percussion and electronica stands out as one of the weekend's most unique sets, conjuring up images of Holy Fuck or Battles in their prime. Meanwhile, Teeth Of The Sea are an utterly mesmerising force. Throwing metal shapes to a twisted blend of post-rock, jazz and math-infused contortions, their forty-five minutes set brings Saturday to a pulsating close.

With the sun once again rearing its head and temperatures soaring to 19 degrees (remember this is October!), the beach seems like an ideal retreat for Sunday afternoon. Back on site, Skinny Girl Diet are kicking up an almighty visceral racket on the Skyline stage. Genuinely shocked at the enthusiastic response to their short twenty minutes long set, they return for an unplanned encore by playing a new as-yet untitled song that sounds like Huggy Bear covering Shellac.

Another band who've given us goose bumps every time we've seen them this year are Pinkshinyultrablast, and tonight is no different. Playing a set consisting mostly of new material, their decision to drop 'Blaster' off 2009's Happy Songs For Happy Zombies causes the first moshpit of the day to erupt on the Centre stage. Mixing electronic elements with decibel splitting noise segments, all held together by Lyubov Soloveva's distinctive coo, the St Petersburg five-piece are a revelation once more.

Lola Colt also prove endearing, their dynamic brand of psychedelia throwing a plethora of twists and turns throughout their bewitching hour long set. As news filters through of a personal tragedy affecting one of their band members, Spiritualized bravely take the stage to play a set that ranks among the finest these eyes have witnessed in twenty-five years of watching the band. As with their recent performance at Liverpool's International Festival of Psychedelia, fan favourites like 'Hey Jane' and 'Come Together' sit side by side with relics from Jason Pierce's Spacemen 3 days, while the as-yet unreleased 'Here It Comes (The Road, Let's Go)' sounds more and more like it could be their most anthemic piece of music to date with every subsequent listen.

Spiritualized's extended set means we onlyhave time to catch Cult Of Dom Keller's last three numbers, but what we do hear is a masterclass in hypnotic, groove-laden psychedelia. Afterwards, the organisers declare Rockaway Beach to be a resounding success considering the majority of its 4000 tickets were sold and another 200 earlybirds for next year already purchased over the course of the weekend. And after experiencing one of the most enjoyable music events of the year, who are we to disagree? Roll on 2016.