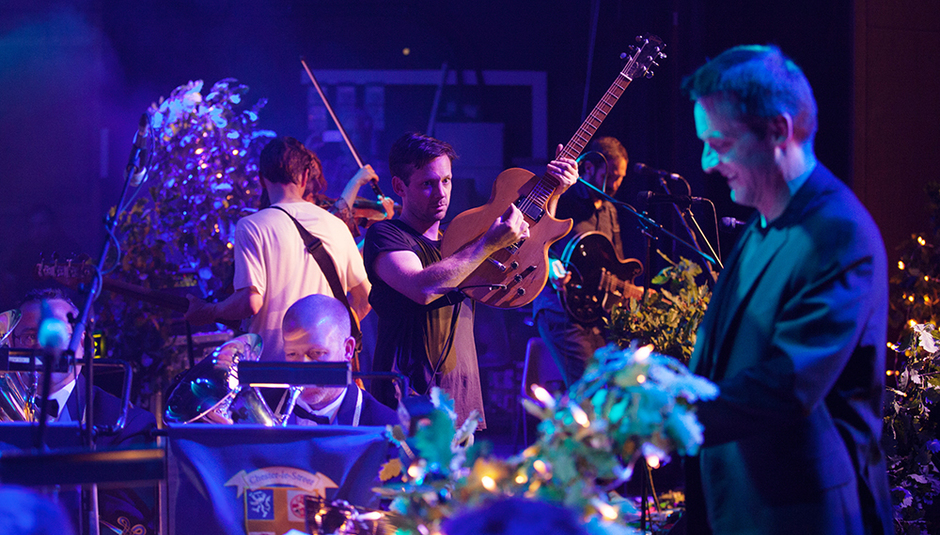 There have been some strange conversations in British Sea Power HQ over the last 15 years. Because they surely have a HQ, this band with their lyrics and e-newsletters that read like surreal historical military fiction, and their gigs that are like humanitarian interventions into territories unknown: remote pubs, ancient caverns, boats, libraries, Jodrell Bank Observatory and Countryfile. There must be some bunker, some Situation Room, some office in Whitehall where the UK’s finest indie rock tacticians can consider scenarios like, “Shall we cover the stage in foliage and dress one of the roadies up as an eight-foot grizzly bear?”, “Could we bring Cumbrian Wrestlers on Jools Holland and get the London Bulgarian Choir to the Mercury Prize ceremony?” and “What if we went on tour with a load of competition brass bands?”

“It was a slow burner,” says singer/guitarist Yan Scott Wilkinson on his bandmates’ reaction when this last question was posed. “There was no strong initial reaction. I do come up with various stupid ideas and a lot of them go nowhere so they probably thought it was a fad that would pass.” British Sea Power, for whom the most bizarre suggestions are routine.

It was a meandering river that flowed into Sea Of Brass, which comes out at the end of this month as a studio album, live album, live DVD and box set with bonus brassy miscellany. First, BSP were asked to do a show at a disused chocolate factory in Derby (because who else would you ask?). “It was a sort of arts commission so it was ideal if you could include some kind of local flavour, or local culture or history,” says Yan. “I was thinking, ‘Well, what do you do? We could do something with [legendary Derby County FC manager] Brian Clough maybe?’”

But between hearing a radio documentary about competition brass bands, reading about artist Jeremy Deller’s 1997 Acid Brass project, and knowing that Derby’s probably the sort of place that has a brass band, another idea formed: to compose new arrangements of British Sea Power songs for brass orchestras to perform with the band live. Somewhere along the line Durham International Brass Festival got involved and the first Sea Of Brass show took place at the festival with the NASUWT Riverside Band in May 2014, followed by an autumn UK tour. “It ended up not happening in Derby,” laughs Yan. “Quite a few things changed along the way.”

There’s something very British Sea Power about the whole endeavour. Brass bands’ roots in working class culture and faint whiff of militarism suit an act who were raised in the rural north before fleeing to the Brighton seaside and writing records that more than hint at an appreciation for historical (not to mention avian, geological and philosophical) trivia. And to a set of musicians with an appetite far greater than any other rock band of their generation for obscure cultural tropes, the alien world of competition brass bands is prime hobbyist real estate.

“It was a very interesting thing,” says Yan. “They do these events that are a bit like sports where they’re judged on a points system – blind judged by judges who can’t see the band. They’re very strictly competing with each other and they play these really tight, fast bits of music. It’s pretty impressive and they’re also quite funny people who seem to like a drink and that kind of thing.”

British Sea Power’s guide through this weirdly rigorous new world was Peter Wraight, a renowned brass arranger and composer with a CV to match British Sea Power’s for it’s variety. “At one point he somehow managed to work with the Chuckle Brothers and also…” Yan trails off. “Oh, what are they called? They did that ‘By The Rivers Of Babylon’ song? Yeah, Boney M! Interesting... But really he’s quite serious.”

The first job was deciding which songs would look best brass plated. “Something Peter was talking about when we first met him was that brass orchestras have this massive dynamic range of volume and tone and timbre, and all these textures and things that very rarely get a chance to be shown off,” says Yan. “[We were] trying to imagine that: what might work for him and give him a chance to do something, and also give some of our other or rarer songs, B-sides and album tracks a chance.”

Once they’d agreed a shortlist, Yan, brother and bassist Hamilton, guitarist Martin Noble, drummer Matthew Wood, keyboard player Phil Sumner and violist Abi Fry recorded a set of stripped-down practice room demos and sent them to Wraight to write new brass arrangements around. “He would write it out in music but for us he would do MIDI keyboard computer-based, incredibly cheap, nasty, horrible sounding... much like a Bontempi keyboard sound, when you press the brass button and you get these farty keyboard sounds,” says Yan. “He was like, ‘Will you understand this? Because it sounds horrible.’

“I was thinking on an optimistic day, ‘This is brilliant’, and on another day I’d think, ‘Oh my god, I don’t know where this is going’. He was just like, ‘Have faith in it’... Up until quite close to the first concert we didn’t actually really know what would happen because we’d only heard these weird versions. Sometimes I’d send him a demo and try and sing a load of parts over the top which were probably equally as confusing for him as what he was doing was for us.”

Wraight’s approach to British Sea Power’s back catalogue varies: fiddly motifs and startling shifts in volume are inserted into ‘Heavenly Waters’, a languorous, abstract obscurity dating from around the band’s 2003 debut The Decline Of British Sea Power; the kraut-ish title track from 2013’s Machineries Of Joy is made even more uplifting by the glistening extra instruments; ‘The Great Skua’ is spectacular enough on 2008’s Do You Like Rock Music?, but adding in a bit of tuba for extra oomph is no bad thing.

The constants are Wraight’s ability and ambitiousness as an arranger. Listening to the recordings, it was clearly never a case of shifting a keyboard riff to a trombone and calling it a day: there are melodic complexities and a dynamic range that realises the potential in having two dozen extra players. And the local bands that Wraight arranged the concerts around were certainly capable of more than a few carols outside John Lewis at Christmas. “He had written these pretty challenging scores, they wouldn’t have a lot of time to rehearse them, so he tried to get basically the best ones and base the gigs a bit around where they live or where they could travel to,” says Yan.

“We ended up playing with some of the best – because they are literally ranked like tennis players or something, so you can go, ‘This is the second best British brass band’. They might disagree with each other but you’ll say, ‘This year, this is the top band’. We were generally playing with, like, the second best, the third or fourth best ones. They were all pretty fantastic musicians. They all know each other and they all think they’re better than each other.”

Rehearsals with each band would take place the night before or on the morning of each gig, leaving little time to work out how to get a rock band with a history of anarchic onstage antics in sync with a heavily drilled brass band who compete at a national level. “I think they were maybe thinking we’d be either terrible and we’d be hard to play with or we’d be really serious or grumpy or have arrogant rock star attitudes,” says Yan. “They were a complete mixture of characters: you get people who work in offices, people who are doing all kinds of physical jobs, aging from teenagers right up to later years.”

Despite the logistical challenges, the brass bands “seemed to really enjoy it – either that or they’re good at faking it”. As for the audience: “If anything I was worried it would be a bit dull,” says Yan, who had to get used to looking out at audiences reclining in posh theatre seats rather than rows of moshing fanatics, from the Sage in Gateshead to London’s Barbican.

“You usually just think, ‘Oh god, they all look fucking bored’... We did generally get a big old standing ovation at the end and people said it was quite an emotional, powerful thing. Not everyone probably, but it seemed to go well.

“It was a bit like, I don’t know, a film, and I was the film and I was watching out the Odeon or something. Occasionally I’ve ended up looking around in cinemas and if you just look at people, and it’s not a horror film and everyone’s not suddenly really scared or something, people tend to just look like zombies in the cinema. But then you get used to it: they’re in big comfy seats, they’re there watching a show. It’s not a clap-along, sing-along thing. That’s what people do.”

The project was scheduled to conclude last November with a show in Kendal (a homecoming for Yan, Hamilton and Woody) with Foden’s Band from down the road in Cheshire. But in the end, it was Redbridge Brass Band who helped see off Sea Of Brass: the London performance, originally planned for a fortnight before Kendal, was cancelled due to a power cut on the night of the gig and moved to January this year, when it was filmed for the live DVD.

A brief jaunt to celebrate the 12th anniversary and reissue of The Decline... in June rounded off a couple of years of British Sea Power have spent reflecting on and reimagining their back catalogue. Now they have studio time booked in to test out ideas for their next record, and as we’ve come to expect with this effortlessly odd band, Yan knows only one thing: “I’m not quite sure which way it’s going to go.”

Sea Of Brass is released on 30 October on Golden Chariot Records.

Listen to a selection of the band’s favourite brassy songs on Spotify.