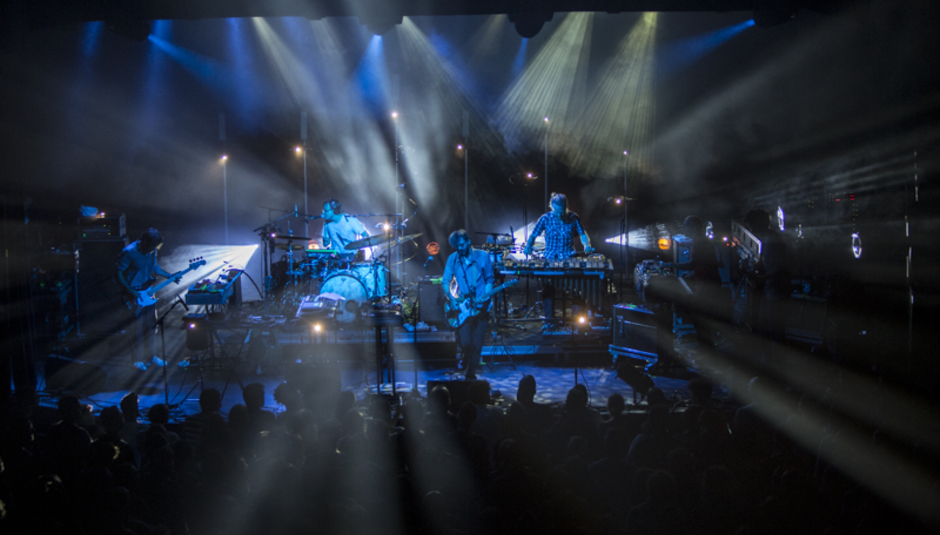 We’re somewhere near Jersey on the overnight ferry to St. Malo when the storms hit, lightning strobing the black waters all around and the swelling waves planting my face pretty firmly into the safety rail of our cabin’s upper bunk. But for La Route Du Rock they broke a week earlier when the festival’s headliner, the singularly irreplaceable Bjork, bowed out suddenly, the circumstances frustratingly vague but the impact seismic. Fair play to Foals for stepping in but she’s not an artist you can just get over, venting through some sweary tweets and drunken yelling and then moving on to the next thing: it’s like trying to dance through a wedding when the bride’s not turned up.

It doesn’t help that she’s still everywhere, her name writ huge upon the posters all over town and on the flyers for her book strewn across the festival site, her albums on the merch stands (albeit derisively marked-down 20%) and her face adorning t-shirts. Heck, some cruel fuck even chases Foals’ set with one of her songs over the loudspeakers, although no-one at least risks the folly of covering her. There’s a line and we all know it.

Well, maybe. Mark Kozalek flirts with his own murder early in Sun Kil Moon’s pre-festival party set, opening less than tactfully with “I’m sorry Bjork cancelled and that none of you got any of your money back. But hey - I’m here” - although of course in this post-Snapes era we’re primed for tension, with half the room waiting batedly for the next headline with their fingers poised on the hashtag key eager to be the first to fleck the foam. But despite some early moments - “You’re a journalist? Get out!” he snarls at one photographer after ‘borrowing’ her camera for two songs - he’s a gentleman throughout in fine if weary form, their set a pretty perfect blend of melody and confession. Heck, he’d even written a poem for the occasion, a lengthy account of wooden legs and clumsy come-ons that pays disarmingly affecting tribute to both his girlfriend and the festival. It’s a tough act for The Notwist to follow but the Bavarian art-rockers take up the challenge gamely, celebrating 2002’s Neon Golden with a pretty flawless rendition that raises some troubling questions as to why they aren’t much bigger.

Daytime Friday passes in a blur of monsoon downpours and rained-off beach venues and €1.87 blood vinegar wine as we cower in our hotel gnawing cheese, but the evening takes us to the festival site proper: an 18th century fort where goats traverse the fortress walls and birds fly through tunnels that double as the emergency exits in one heck of a USP. It would be idyllic if not for Wand’s racket of volume and psychedelia, endearing if a little drifting. Ditto the Thurston Moore Band, the highpoints bracing but the drone sapping momentum, although Algiers are stunning, a slow-burn of doomy atmosphere and striking southern gospel vocals - when you’ve got a crowd wading into ankle-deep water to get a better sightline you know you’re on to something.

By the end of Girlband’s set all that water’s been churned into mud and we could carry on dancing to the tinnitus, their vicious, viscous noise-rock compulsive and terrifying even if the songs aren’t really there, whilst Ratatat - for Ratatat we kind of wish we hadn’t have been there. That’s the problem with the two-stage set-up, bands alternating between them - you can’t miss anything. Sure, with a lineup this finely curated that’s overwhelmingly a strength, the evenings a near-unbroken stream of innovative sounds, but this clumsy patchwork of Garageband loops and Darkness riffs and ceaseless, baffling gifs of wildfowl shouldn’t be getting anywhere near a crowd this large - especially one that, owing to the screens and speakers relying the show all over site, can’t actually escape it. In the end we take the only non-violent option left to us and flee in a van.

We awake to blue skies and a craving for oysters so join the legions of festival-goers being bussed to wander St. Malo’s formidable walls and stunning beaches, arriving just in time for damn near everywhere to shut for the afternoon. Ah, France. Still, it’s all very beautiful, and the festival stage right on the sand is a great touch even if it is a mite underused: Hinds would definitely have come across better there than they do at the fort that night, particularly when the tide washed in and they have to augment their lo-cal indie whine with screaming for help. Back on site Kiasmos taunt us with their Icelandicness (“Bjork says hello”) but charm with their warm chords and minimal beats whilst Daniel Avery’s chilly techno perfectly complements the shivering air.

Meanwhile backstage the festival organisers are close to fashioning nooses from the hay in the VIP bar as the news comes through that Foals’ bassist has been despatched to hospital with food poisoning. Their roadie does a great job in his stead but it’s a compromised show nonetheless, its length curtailed and the setlist uninspired: despite Yannis’ instruction to “Let’s fuck this place up” only ‘Inhaler’ and ‘Two Steps Twice’ really punch, and the band’s graduation to headliner status seems to have brought with it an unpleasant swagger that isn’t really being warranted by the quality of their songs. Still, at least they turned up.

By Sunday we’re all worn and broken, although as much from the glut of red wine and the French propensity towards three-course feasting as the late nights and brutal decibels. It’s the former that cause us to miss most of Father John Misty and Viet Cong, who were by accounts pretty great but almost certainly not on a par with the duck. Savages though - for Savages we cut short dessert, and I barely regret it. Artillery drums and air-raid swells and anguished howls held together by Ayse Hassan’s bass loops and sheer bastard vigour, the band as coiled and tense as ever but invigoured by their new material. 'Fuckers' still wins it, of course, Jehnny Beth conveying its premise in silky French as it works up into its drawn-out ferocity, as urgent and compelling and genuinely exciting as music gets - which kind of leaves everything else that night, a gleefully euphoric Dan Deacon set excepted, a little muted.

But hey, we forgot about Bjork. Twelve hours later, nauseous and hungover on the ferry back and watching the pantomime drag us closer to the hell-mouth and a guy says “I was never going for her anyway - I was just going for the festival.” And he’s spot on: La Route Du Rock gets pretty much everything right, its lineup, location and just general curation punching way above the norm for an event of this size. So roll on next year, whoever cancels.