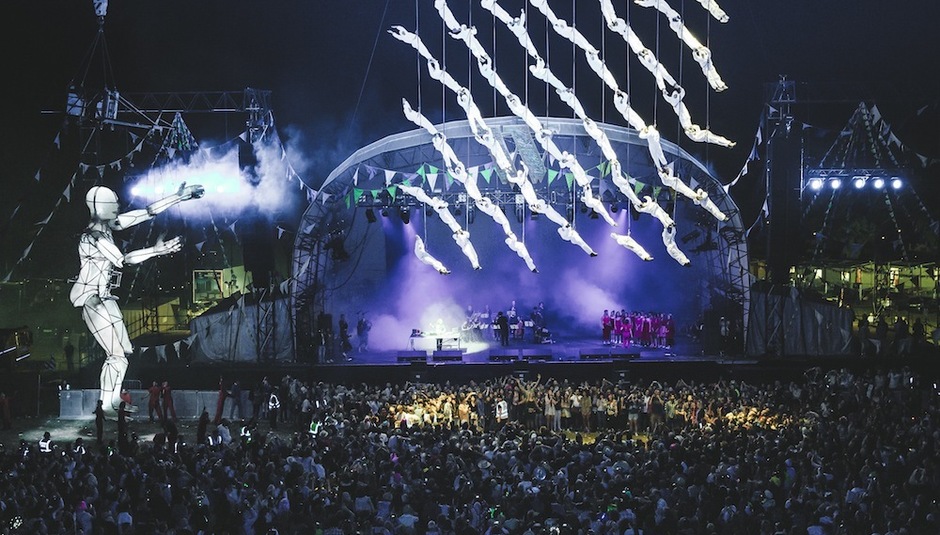 “It’s, like, the paradox of the modern festival, right?” muses my better half, with a clarity that confirms a suspicion that, no, those are not double measures we are getting for that price. Wilderness—an event as much about gastronomy, the arts, wellbeing, and the great outdoors as it is music—plays heavy on the old trope of festival as bohemian utopia. It invites us to wild swim in spring-fed lakes. It encourages fancy-dress hedonism at every turn. It feels, at least, as if it has more opportunities to partake in yoga per square foot than any other place in the world.

But out here in the rolling Oxfordshire countryside there’s a subtle identity crisis at play. I’d hazard a guess that you could hear the hum of a nearby meditation workshop through the clinking of glasses at the Laurent-Perrier champagne tent (far from the only upmarket booze brand vying for your custom, incidentally). Once that workshop has moved out, the same space plays host to a talk entitled 'How To Succeed in Business'. Despite a varied demographic, you don’t have to squint too hard to find a member of the Made in Chelsea set. Go to all the woodland foraging sessions and mindfulness workshops you like, there's no getting away from the fact you'll be charged £8 to find out what time the bands are on.

Still, consumerist cracks in a utopian veneer aside, the music that you get with the price of admission certainly comes with a degree of quality assurance. Originally her final UK date of the year, now one of the final Vulnicura performances full stop, Björk’s Friday night headline set represents something of a coup for the festival, still only in its fifth year. She takes the stage flanked by a string section from The Heritage Orchestra, with The Haxan Cloak lurking menacingly toward the back of the stage in a manner you suspect makes him feel right at home. It's a beautiful set that draws heavily from her recent release, although the dust is also brushed off the likes of ‘Hyperballad’ and ‘Hunter’ for the occasion. With its strings fully realised by the orchestra, the gentle ‘Stonemiker’ proves a particular highlight, as does its more twitchy sibling 'Lionsong'. “Thank you!” she yips excitedly, Tamagotchi cadence to her voice. Performing Vulnicura may be hard, but on the surface at least, Björk seems to be in good spirits. But then, beneath that insectile mask of hers, who can tell what she’s feeling?


Before that, the ever reliable Nils Frahm turns in a techno-heavy collection alongside some more familiar set pieces like ‘Says’ and ‘Hammers’, although it falls relatively flat in comparison to the last time I saw him play. Not that I suspect he himself does anything differently, though. Frahm on a rainy October night at the Barbican beats Frahm on a woozy-with-cider August afternoon whichever way you look at it. Both the Icelander and the German, however, get a patchy reception from a crowd of whom the majority you suspect might not be watching either under other any other circumstance, and it takes the likes of Nick Mulvey to truly get them onside. His music, much like Sunday headliner Ben Howard, is both palatable enough to draw the first substantial crowd for a non-headliner I see all weekend, while complex enough to keep them enthralled. The performance, which Mulvey assures onlookers is the last in support of his Mercury-nominated debut First Mind, feels like just that: tight, road-worn, and with all the kinks ironed out long, long ago. A surprising weekend highlight.

There are other curiosities here and there, but again, these seem to go mostly unnoticed – this is, after all, as much a festival at which there happens to be music as a music festival. Låpsley’s (not Scandinavian, actually from Merseyside) washed out cityscapes are certainly pretty, but prove a tough sell for a morning crowd who still have the lion’s share of a day’s merriment ahead of them. The same goes for Ásgeir (actually Scandinavian, not from Merseyside), whose intricate folk-pop, while record breaking-ly popular in his native country, seems only to wallpaper the conversation for the majority of the audience.

But music aside, one of the best things to come packaged with a 2015 wristband turns out to be an appearance from Spanish theatrical troupe La Fura dels Baus. No sooner have George Clinton, Parliament and Funkadelic wrapped up an unrelentingly energetic headline set than two giant cranes either side of the main stage are set into motion. From our left, a gargantuan ice blue puppet comes floating over the crowd, gesturing slowly to the sound of futuristic sound art. Subsequently, on the right, about thirty aerial performers are suspended from ropes, making synchronised patterns as the glowing mannequin begins to conduct them. It is a bizarre, completely unexpected, and utterly brilliant climax to a Saturday evening, and, as the final musical number is unceremoniously faded out at precisely 12:01am (some bloke from the local council presumably furiously tapping his watch), it feels a shame it has to be so short.


All in all, hardly a weak link out there. But the problem, if any, lies with quantity, not quality. For all intents and purposes you only get the one stage's worth of music, at least of any note (there is a folk stage, a small bandstand, and a dance-oriented space on the other side of the site, but not a recognisable name between them). But then, on paper at least, this small, carefully curated music line-up is just part of a genuinely interdisciplinary arts festival. What about the food, the talks and debates, the outdoor activities?

Unfortunately in practice you won't see too much of it, unless you happen to have very deep pockets. A few tents (‘The Secret Forum’, ‘Now Live Events’) host free talks and debates, but you still have to pay for a huge proportion of the medium- to big-ticket events. A shame, as the few that we take in are certainly worthwhile. The Oxford Shakespeare Company put on a fantastic, intimate performance of Twelfth Night in a valley in the woods. The BitterSuite multi-sensory concert is unlike anything else I've ever experienced – its participants are blindfolded before having their senses poked, prodded, and fed in time with the music. Elsewhere, you can, if you have the inclination, pay to attend a banquet prepared by Raymond Blanc. Or for admittance to an exclusive spa, complete with hot tubs, sauna, and treatments I don't fully understand. Or an artisan bread making session at the Wilderness Cookery School.


Wilderness caters both to the masses and the few. Its ideology seems a gesture towards the collective, but so many of the non-musical flagship events are only accessible to those with a golden ticket (and the cash to buy that ticket). Its programming is often willingly left field, although you expect its audience would be better suited to something more accessible. But, financial and demographic qualms aside, there is an undeniable quality about Wilderness, both in terms of its events and site and its facilities. And, you know, you can fill the spare time by bobbing around in a lake, so really what is there to complain about?

“We’ve been dismantling the rules sin...