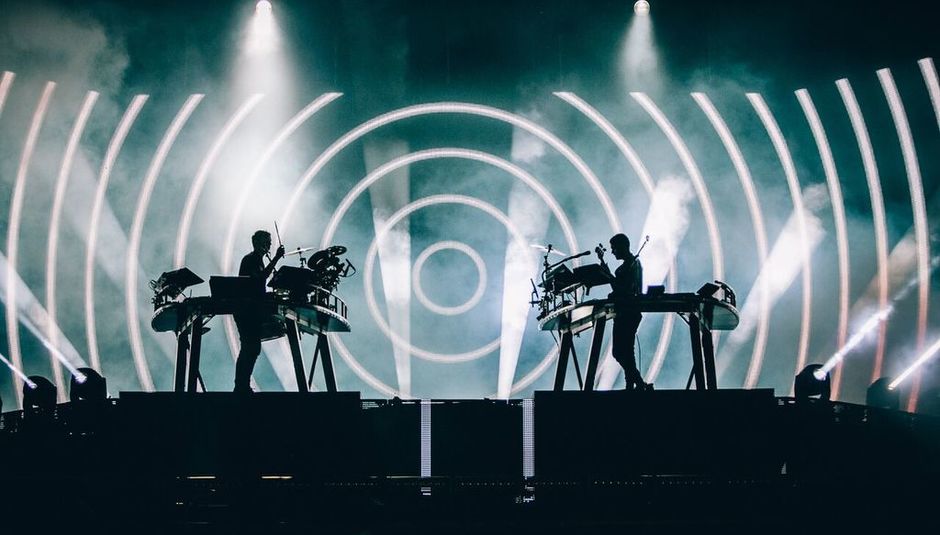 It was with much anticipation that I returned to Portugal's NOS Alive for its 2015 edition. This year’s line-up doesn’t quite match last year but there are still a healthy combination of big names and highly acclaimed acts.

Situated in the Alges district of Lisbon and by the Tagus river, the festival wisely only begins at 5pm daily with the main stage holding off until 6pm. One of the biggest attractions of the three day event is the near-guaranteed glorious weather but that does have the flip side that the UK model of opening at midday is out of the question. That does give punters the full day to experience Lisbon though, or in the case of DiS, lounge around the pool with Superbock.

The first act we get to see is The Wombats. Although their indie-pop schtick became tired after just a few listens of ‘Let’s Dance To Joy Division’, never mind in 2015, their set is actually rapturously received by the crowd. A combination of recognisable tracks and general excitement at the festival really kicking off makes their set an unexpected success.

The same cannot be said for James Bay, whose main offering is some cringeworthy attempts at audience participation. Only ‘Hold Back The River’ makes any kind of impression whatsoever and the level of regret DiS feels for not leaving to watch Young Fathers is strong.

There’s still time for Metronomy to take things up a notch and that’s exactly what they do. Tracks from Love Letters are all received well by the crowd as is a rendition of the wonderful ‘Heartbreaker’. It’s at this point that we get properly into the festival mindset and decide we need some overpriced food. Except at NOS Alive, it’s not overpriced, so we get a reasonably-priced chorizo bread from a stand for €3. It’s fresh, it’s tasty and the organisers at British festivals should be ashamed to show their faces.

Alt-J then warm up for their headline slot at Latitude Festival. Their style splits opinion but here they prove they have the credentials to headline a festival. Tracks from both albums have the same impact, always a good sign for a band at this stage of their career. ‘Left Hand Free’ and ‘Breezeblocks’ are highlights but ‘Fitzpleasure’ really takes the crown when it’s dropped early in the set.

On to Muse then, who have redeemed themselves in the eyes of a lot of their hardcore fanbase – but not really anybody else – with the release of their album Drones and mini tour of the UK that proceeded it. After Download Festival in June, this is much more Muse-by-numbers. The hits are all played and the crowd reliably laps it up. There’s a reason they consistently headline festivals across Europe. An outing for ‘Apocalypse Please’ is very welcome, as is the emergence of newer track ‘Mercy’ as a main set closer. The sooner it replaces the fantastic (but predictable) ‘Knights of Cydonia’ at the end of the encore, the better.

And then the beauty of a festival that goes on until 4am. Django Django cap our night with wonderful performances including an obviously giddy version of ‘Default’.

Saturday sees a very hungover DiS sat at the back of the Heineken Stage early on watching Bear’s Den. Imagine Mumford and Sons but not entirely awful (more on that later). Marmozets then play one of the best sets of the festival. If there’s something the festival needed at this point it was a heavier act. Tracks from their debut are a brutal wake up that snaps us out of our reverie, ‘Captivate You’ is a highlight, and a closing jam of ‘Bulls on Parade’ sends us away happy.

Kodaline then get loads of cheap cheers by saying Portugal really enthusiastically quite a lot. They’re followed by the equally uninspiring Mumford & Sons who remind us of the need for acts like Alt-J to make that leap to festival headliners. The Prodigy, at least, are reliably energetic even if their best days are behind them. Then the moody-dance music of Roisin Murphy provides a strong conclusion the night in a perfectly-suited late slot.

Sleaford Mods are the first act that we see on Sunday. They’re so brutally British that you wonder how the Lisbon crowd would react to them but the duo themselves spend little time worrying about that. It’s made all the more abrasive by the glorious setting and makes them an even more unique prospect. Counting Crows, meanwhile, can get in the bin.

Sam Smith took the stage looking much happier with life than his songs would suggest. His between song interaction was as cringeworthy as his actual material. Meanwhile Mogwai were performing to a much smaller crowd on the Heineken Stage. Armed with some very low priced wine we decided to watch their usual life-affirming work before sticking around to see Azealia Banks. She might not have lived up to her hype but '212' is still an absolute stormer at the festival. Kudos to the pair of shorts that flew across the arena during that closing track.

Disclosure then, to send us into the night. Their headline performance would’ve suited more special guests (especially Sam Smith as he was on site) but a stellar light show along with some of the most recognisable dance tracks of the decade mean that it’s a fitting way to see out the festival.

NOS Alive 2015: still brilliant in all the ways it has always been. You get a holiday and a festival rolled together, the chance to see Lisbon in it’s glory, and for probably the same cost as you would spend if you went to a UK festival and really went for it. Some of the line-up was better than other parts for sure but in 2015 you go to festivals for the experience anyway. We’ll be back in 2016.