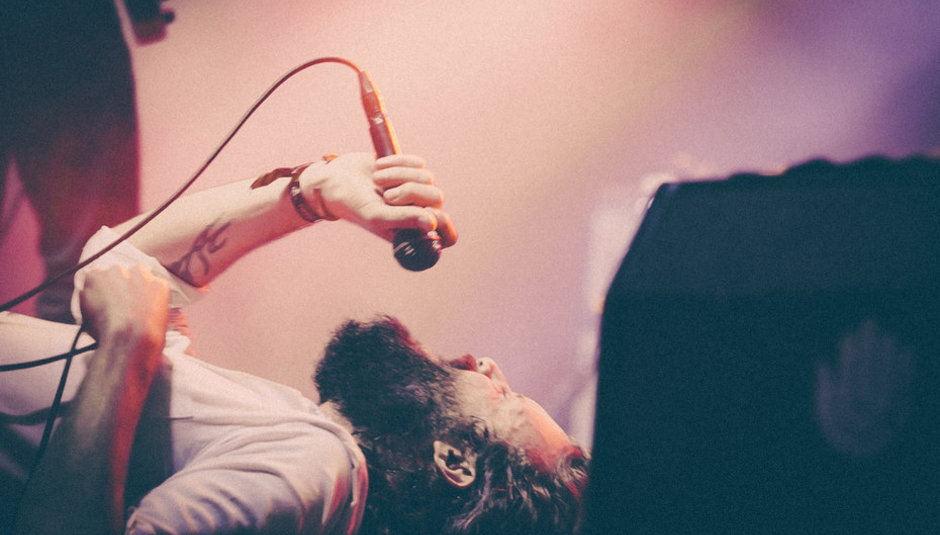 The second edition of Vida Festival took place over the first weekend of July in the dusty pine woods on the outskirts of Vilanova i la Geltru, a short train ride down the coast from Barcelona. It was an absolute treat, boasting a stellar line-up of local and international talent both breaking and established, from Mourn to Father John Misty (pictured), Hinds to Primal Scream, Nueva Vulcano to The War on Drugs, in a wonderful setting. Here are five things which were great about it:

The Music You Know


Big names on Friday include The War on Drugs and Super Furry Animals, and the former rise to the occasion with an electrifying set on the main (Estrella Damm) stage. Between-song banter is limited, but Adam Granduciel makes for a swirling, energetic focal point all the same, and highlights from Lost in the Dream tumble thick and fast in a set that gains in ballast as it roars on. At 2am the Furries emerge, decked out in white boiler suits, and prove a lovely - if, perhaps, slight - way to round out the evening.

If there’s one thing lacking during the festival’s first day proper, though, it’s a sense of showmanship (even Benjamin Clementine, for all his histrionics, makes for an oddly subdued presence). Enter Father John Misty. The singer and his band absolutely boss Saturday night, with a set that adds muscle and snarl to cuts from his two albums under the Misty moniker. Tillman himself is unstoppable, gyrating, contorting, falling to his knees and jumping off the stage in order to sing to the crowd. He jokes about his prowess on the guitar (‘I think it’s why people come to see me’); mulls over the level to which you can acceptably wear your shirt unbuttoned in this country; offers his condolences to the Spanish for the ‘gorgeous beaches, beautiful women and midday naps’ they have to deal with; and he sings, beautifully, throughout. He is brilliant: somewhere between Jarvis Cocker and Jim Morrison, my friend observes, in his first exposure to the singer. A bracing ‘The Ideal Husband’ wraps things up, and calls for an encore reverberate through the night.

Later on Primal Scream - Bobby Gillespie, specifically - turn in a thundering performance. The singer’s first action once onstage is to get his public clapping, his last to blow them kisses. He and his group also pose the question: is there a better festival set-closing triumvirate than ‘Loaded’, ‘Movin’ On Up’ and ‘Rocks’? Not on this evidence. Earlier in the evening Andrew Bird makes the cardinal sin of choosing a festival show to road-test new material, but it sounds so good that that soon ceases to matter; harder-edged and louder than much of his recent output, a new song entitled ‘Valley of the Young’ is especially promising, while ‘A Nervous Tic Motion to the Head’ and ‘Give It Away’ are brilliant as ever, and a reworked ‘Three White Horses’ suitably apocalyptic.


It’s quite possible you will have heard of Catalonia’s own Mourn by now, a teenage quartet whose stormy debut album has gained them many plaudits. I arrive on-site to the strains of ‘Otitis’, a muscular two-and-a-half-minute stomper, and it leads me to where they’re performing. They confound the early-evening crowd gathered in the woods, Carla Pérez Fas and Jazz Rodríguez Bueno flanking Jazz’s younger sister Leia and drummer Antonio Postius Echeverría on the Jägermusic Cabana stage, their twin vocal attack something to behold. Although they don’t yet seem completely at ease in front of a crowd (not surprising given their tender years), the quality in their songs is apparent, and the closing ‘Silver Gold’ is a noisy, caustic delight. Echeverría’s sticks go flying as the group leave the stage, and next to me an older guy in a Miles Davis t-shirt is incredulous. ‘¡Joder!’ he exclaims. ‘I want more!’

The following evening Madrid’s Hinds (formerly Deers) are up on the same stage, and their show is loose, scrappy and completely endearing. Co-vocalists Carlotta Cosials and Ana García Perrote complement each other perfectly: Cosials’ voice sharp and piercing, Perrote’s softer and deeper, while their guitar lines interweave and lock into each other in a manner that hints at something more profound than the good-time garage rock they’ve made their name on. ‘Bamboo’ gets a huge reaction, and so it should: it’s a wonderfully affecting, catchy number. When the band are called on for more songs, they first check that it’s okay with the stage managers (it is), before Perrote realises that they don’t know what to play. So, they play ‘Bamboo’ again, call for a gleeful stage invasion (it really isn’t that big a stage), and once they’re done they chat and pose with their fans for pictures. It’s a fitting end to a show in which not one member of the band once stopped smiling.

The Music You Probably Don’t Know


Interviewed in El País ahead of his appearance here, Andrew Bird noted how refreshing it was to see lots of local acts on the bill. Among them are Nueva Vulcano, a trio on Barcelona’s renowned indie label, BCore. Their latest album, Novelería, finds them in confident control of a sound that incorporates elements of hardcore and punk and marries them to taut, twisting rock songs. Soaking up those whose ears are still ringing from The War on Drugs’ set on the other side of the main arena, they are on brisk, excellent form tonight, even if the crowd at the Masia stage take a while to warm up.

Earlier in the day Xoel López plays a rousing set of folk-pop songs on the Vaixell stage, while Renaldo & Clara at the Cabin are a thing of quiet beauty, and perfect viewing as the evening light dims. Clara Viñals’ soft, honey-sweet voice anchors the five-piece’s songs: delicate, chiming lullabies that rarely exceed two or three minutes and constitute a real festival discovery.

The Sound and Stages


The sound, throughout the entire festival and on each of its stages, is loud and flawless. The stages themselves are pretty special, too: I’m thinking more of the Vaixell - a rowboat adorned with hanging fishes in the woods - and the Cabana, but the two bigger stages in the main area are impressive as well, boasting some great light-shows on top of their crystalline sound.

The Setting, Drinks and Food


The festival is family-friendly with some kids’ activities and storytelling things going on, but it caters for night-owls, too: once the main bands are done DJs play till the early hours. It seemed that most festival-goers either camped or stayed in hotels in the city, something easily accomplished via the (admittedly overcrowded) shuttle buses that run between the train station, campsite and arena (no more then a twenty-minute round trip), which cost one euro a ride. The festival collaborates with RENFE, Spain’s railway operator, to put on a late service back to Barcelona on Friday and Saturday night as well, with trains leaving at 1:45 and 3:35 in the morning. (I took the late train, but on reflection would recommend staying in the city in order to catch the various DJ sets and things going on in the town and beach bar during the day, and to avoid a trek home.)

Drink prices are the most reasonable I’ve seen in a long time, with a medium-sized beer setting you back €2.50 and mixers starting from €6 (mixes with a far more generous pour than those in the UK, I should add), while the Picnic area boasts a range of options, from the gourmet fast food of the Flying Kitchen to Mexican, Spanish, Japanese and (excellent) Thai. There are plenty of toilets and bars, and drinks queues rarely last long.

Of course, all of these things are secondary to what really makes a great festival: its line-up, and this year’s Vida was emphatically good in that respect. Add that to all of the other things it gets right - the food, the sound, the drinks, and, perhaps most of all, the beautiful setting - and you’ve got something pretty special.