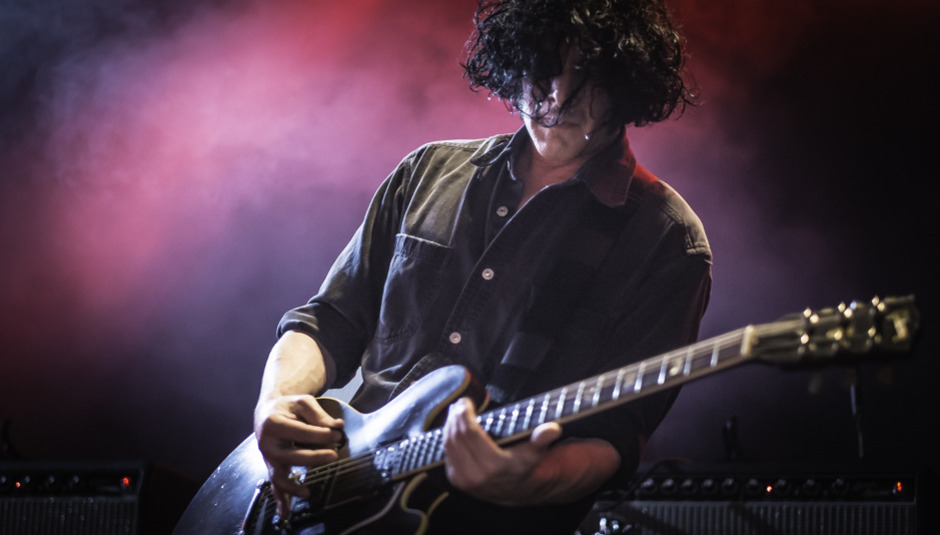 When Black Rebel Motorcycle Club drummer Leah Shapiro announced last October she'd been struck by Chiari Malformations in the brain, few would have expected to see her back behind the drumkit so soon. Nevertheless, having undergoing surgery in November then spending the first part of 2015 recuperating, it's testament to her fighting spirit that she's here this evening doing what she does best. Since joining the band in 2008, she's provided an extra dynamic to what was already a solid, creative bond. The rhythmic driving force in a band whose music holds no bounds in terms of genre classification.

While Black Rebel Motorcycle Club's peak in terms of commercial success can be traced back over a decade to 2003's Take Them On, On Your Own, they've developed into a consistent tour de force on the live circuit. Retaining one of the most loyally devoted followings to boot - their tours regularly sell out weeks in advance - Black Rebel Motorcycle Club shows have become events rather than mere gigs.

So even with the post-Glastonbury talking points surrounding Kanye and The Libertines still fresh in the air, the word around Nottingham's public houses on this balmy Tuesday evening turn to setlists and whether they'll play any new material. Some people tell us they're going to every leg of the UK tour and with any luck, a couple of the European dates too. It's this kind of rabid devotion that makes tonight's supposedly low-key performance that bit extra special.

Taking the stage at Nottingham's Rock City, a venue that has become something of a spiritual home since first appearing here over a decade ago, the screams from the front rows almost drowning out the opening bars to 'Beat The Devil's Tattoo'. Clad in their customary black leather jackets, Robert Levon Bean and Peter Hayes remain the focal points of the band. Taking turns to sing lead vocals while harmonising the rest of the time, it's their distinctive tones that render Black Rebel Motorcycle Club instantly recognisable.

Understandably there are new songs aired this evening. What we get instead is a career spanning set encompassing each of the band's six albums (instrumental record The Effects Of 333 excluded) that serves as a timely reminder of why Black Rebel Motorcycle Club can still pack 2000+ capacity venues thousands of miles from home without anything new to promote. Nevertheless, there are still several surprises among the twenty-one song set. Most noticeably a blistering 'American X' - arguably the standout from 2007's Baby 81 - which takes on a whole new sonic dimension in the flesh.

Elsewhere, it's not so much business as a usual but more an exercise in how to conduct a rock and roll masterclass for the best part of two hours. The atmospheric 'Rifles' is dispatched early, reinforcing why most of those present fell in love with this band in the first place. Country-tinged teaser 'Ain't No Easy Way' and opulent drawler 'Berlin' follow suit, each demonstrating the band's versatility while taking inspiration from opposite ends of the musical spectrum.

The familiar (to anyone that's seen them before) acoustic segment almost falls apart during Hayes' gentle reading of 'Complicated Situation' due to a technical fault. However, when Bean joins him onstage for a stripped down run through early single 'Love Burns', aided and abetted in no small part by the audience who sing every word back, the sound through Hayes' mic is restored.

With the end fast approaching, it's left to the trio to conjure up a showstopping finale that collects their two biggest hit singles ('Stop', 'Spread Your Love') alongside a selection of their most popular album tracks ('Conscience Killer', 'Awake'). By the time 'Whatever Happened To My Rock'n'Roll (Punk Song)' finishes proceedings, Bean is in the audience while his two cohorts wear beaming Cheshire cat grins.

Tonight was an exercise in telling the world Black Rebel Motorcycle Club are back with a vengeance. You have been warned.

DiS meets Kim Gordon: "You have to ta...