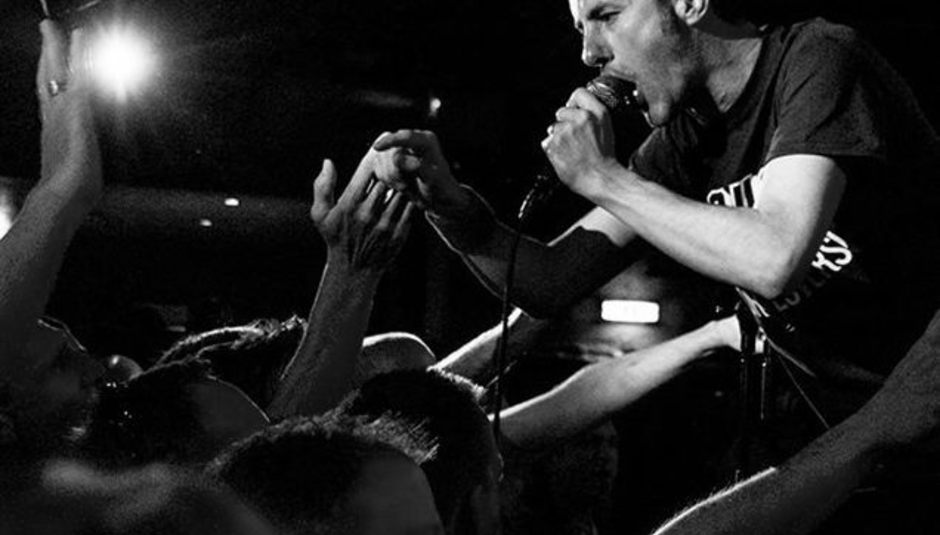 As the demand for musical reunions shows no sign of grinding to a halt just yet, it's heartwarming to see a band getting back together for reasons other than lucre. Step forward and take a bow Thousand Yard Stare, unsung heroes of the UK live circuit some quarter of a century ago. Having emerged in an era where interaction between audience and band was deemed to be key by many, Thousand Yard Stare earned a reputation as one of the most honest, diligent and approachable outfits on the circuit. At their most active between 1989 and 1992, barely a month would pass over that three-year period without the band being on the road at some point. Building up a hardcore following of devotees, many of whom would travel to every show, Thousand Yard Stare gigs became social events for those offstage as well as on it. An opportunity to catch up with old acquaintances and make new ones. From Nottingham to Newport, Birmingham to Basingstoke and beyond, they were a genuine word-of-mouth phenomenon. No airs, no graces, no pretense. They wrote songs about being outsiders in a smalltown, songs you and I could relate to. They started a label (Stifled Aardvark), designed their own merchandise, set up a fanclub (The Yardstick) and even sold the occasional live bootleg at shows. By the time criminally underrated debut album Hands On hit the shops in the early part of 1992 their faces had already adorned the front cover of Melody Maker. To this day it remains a mystery why Thousand Yard Stare didn't become a household name like their peers of the day. Less than two years later it was all over. Until now...

Having been toying with the idea of reuniting for a couple of years, the five core members - Stephen Barnes (vocals), Giles Duffy (lead guitar), Sean McDonough (bass), Kevin Moxon (rhythm guitar) and Dominic Bostock (drums) - finally got back in the rehearsal room just before Christmas of last year. Nowadays all based in various corners of the UK, while suggestions of playing a gig may have been off the agenda at that point, it was also somewhat inevitable. That they chose to reunite for a one-off show in aid of two charities close to their hearts also spoke volumes. It's also quite telling the band chose to play the intimate confines of Soho's tiny Borderline, resisting offers from promoters to upgrade to larger venues after tickets sold out within days of going on sale. As Stephen Barnes explained to DiS a couple of weeks before the show, "We always said any reunion gig would only be for charity". What they probably didn't expect to see was such a rabid audience anxious to devour every last morsel of their sixteen-songs.

Beforehand, support act and long time associates SubRosa5 relived their own youthful exuberance with a set made up of original material and covers, most notably a psychedelic reworking of The Sandkings 'Uptight'. They're well received by a crowd almost exclusively made up of people over forty years of age.

With the atmosphere switching from excitement to tension and back again while the temperature's at boiling point, the cheer that greets Thousand Yard Stare's arrival on stage is deafening. The kind normally reserved for a football team. Opening with instrumental 'Junketing', a regular staple of the band's live set from back in the day, it takes all of about twenty seconds for a moshpit to materialise out front. By the time frontman Barnes joins them for 'Version Of Me', the band's final single and one of only three songs aired tonight off much-maligned second album Mappamundi, sweat disguised as condensation is literally dripping from the ceiling.

While first album tracks 'Cottager' and 'Seasonstream' understandably draw unabated rounds of applause, it's the more obscure 'Another And On' and 'Keepsake' that turn the Borderline into a heaving mass of bodies. Stagediving and crowdsurfing ensue - singer Barnes, clearly enjoying the occasion, being one of them. Some poor bloke even loses a tooth during 'Buttermouth', which he promptly hands to the bewildered singer at the song's close. 'Comeuppance', which gave the band a Top 40 singles chart placing back in 1992 follows suit. While a raucous 'What's Your Level' whips the room up into a frenzy before a rousing rendition of debut single 'Wonderment' - which Barnes dedicates to his mother who passed away recently - brings the first instalment of the show to a close.

Returning for an encore, instrumental rarity 'Spindrift' being the first of four songs before Barnes once again rejoins them for a joyous run through '0-0 A.E.T.' Just like the old days, there's a feeling of camaraderie as fallen bodies are helped off the floor, spilt pints replenished by provocateurs and a general feeling of goodwill all round. A cover of Wire's 'Strange' - another regular live feature way back when - brings up the rear before another of the band's former 45s 'Wideshire' ends proceedings.

As reunion shows go, this has a discerningly more celebratory edge about it than most. It may be 22 years since Thousand Yard Stare last shared a stage together but on this showing it seemed like they'd never been away. A fitting swansong? Or maybe the gateway to a full-blown reformation? Whatever Thousand Yard Stare decide to do in the future, tonight's performance will live long in the memory. Welcome back!

Return of the Mac: What Apple’s Music...