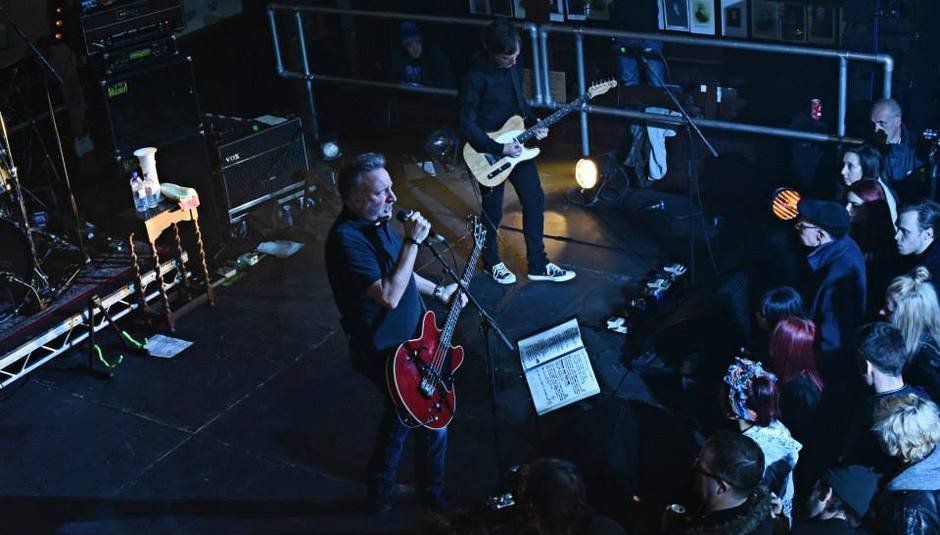 May 18th 2015: Thirty-five years to the day that Ian Curtis tragically passed away. It was also five years ago today that Peter Hook And The Light played their first ever gig, performing Joy Division's seminal debut Unknown Pleasures in full. So, bearing that in mind, it was perhaps understandable that he would choose that particular date to pay the ultimate tribute to his departed singer. In March, Hook announced that his band would play 3 sets containing Joy Division's entire written and recorded output - a staggering 48 songs in total - in one exquisite performance. That he chose an 18th Century listed building in Macclesfield - Curtis's hometown - probably bore some significance. As did the decision to involve two charities - the Epilepsy Society and the Churches Conservation Trust - with all proceeds from ticket sales being split between the two.

Inevitably, tickets for the 450 capacity venue sold out in minutes, both punters and touts loitering conspicuously looking for spares right up until show time. For a band held in such reverence, Christ Church seemed a fitting choice of venue. While its acoustics undoubtedly benefited the sound emanating from the stage set-up on the altar, it gave those fortunate enough to secure a ticket - some had travelled from as far afield as Holland, Germany and America - an opportunity to pay their respects to an artist whose life was cut short at the young age of just twenty-three. Situated in the centre of the town about a mile-and-a-half away from Curtis's memorial stone in Macclesfield Cemetery, Christ Church has endured a chequered life of its own having lay dormant for thirty years until being reopened for last year's Barnaby Festival, which celebrates the town's cultural and creative heritage.

Earlier in the day, esteemed photographer Kevin Cummins gave a talk with journalist and musician John Robb about his work with the band, while limited edition commemorative merchandise is snapped up eagerly by those awaiting the main event. Inside the church there's a celebratory rather than sombre mood. Family and friends of Peter Hook are sat in the balcony towards the far end of the building, anticipating the band's arrival as much as those here in simple homage. The sight of people wandering around a church sipping cans of Red Stripe and Magners may seem a little odd, but then as with any wake, tonight is about toasting the good times and remembering Curtis's legacy.

Introduced on stage by Howard Marks, Hook and The Light - essentially three of his former Monaco bandmates plus son Jack Bates on bass - open with the snarling 'At A Later Date', a song taken from Joy Division's first ever recording back in October 1977, which persuades a handful of people to leave their pews and head for the front. By the fourth song ('Leaders Of Men' from debut EP An Ideal For Living) the temptation is too great to resist and DiS has joined them. Focusing mainly on their earliest work up to and including Unknown Pleasures, it's fascinating to hear the likes of 'The Drawback' and 'They Walked In Line' - rarely played live even back in the day - brought to life here. Very little is said in between songs other than the odd dedication or introduction. Rowetta, best known for her work with Happy Mondays and more recently as a contestant on ITV's 'The X Factor' joins them for 'Insight' and 'New Dawn Fades' and her gritty, soulful voice enriches the poignancy of both.

The first set complete, it's left to instrumental 'Incubation' to announce the second part. 'The Only Mistake' and 'Dead Souls' resonate intently as more people have now made their way to the front. Rowetta comes back out for a touching rendition of 'Atmosphere'. Everyone joins in as if it were a communal hymn. As the disturbing introduction to 'Atrocity Exhibition' paves the way for Closer, there's a hushed silence except for the bloke behind me who's been constantly shouting for 'Temptation' this past hour (wrong band mate). As 'Decades' brings this segment to a mournful close, the reason we're here tonight sinks in.

The third and final part opens with 'Something Must Break', a song recorded for but never released as part of the 'Transmission' single. Delivered with impeccable nous, it's testament to Hook and his band that these songs sound so vital decades later. 'Transmission' itself causes a near riot when the opening chords are dispatched, while the vocals cut out altogether during 'Love Will Tear Us Apart', still Joy Division's best known song. Any other time it would probably be a cause to crucify the sound engineer. However, here, with 450 hearty souls singing every word back, no one really notices.

Closing the show with 'Ceremony' and 'In A Lonely Place', the songs which would have been Joy Division's next single and ended up being New Order's first, the latter's refrain of "How I wish you were here with me now" having an even more plaintive air about it. After almost three hours and forty minutes of music, it's over. Sure, there'll be some accusations of sacrilege, mainly from people that weren't actually present. Because if they had been there, it would be difficult to leave in anything but awe at what we've just witnessed.

A fitting epitaph brimming with passion and one that did both Ian Curtis and Joy Division's legacies proud.

Ten things we learned from The Great ...

"We were never really up for playing ...