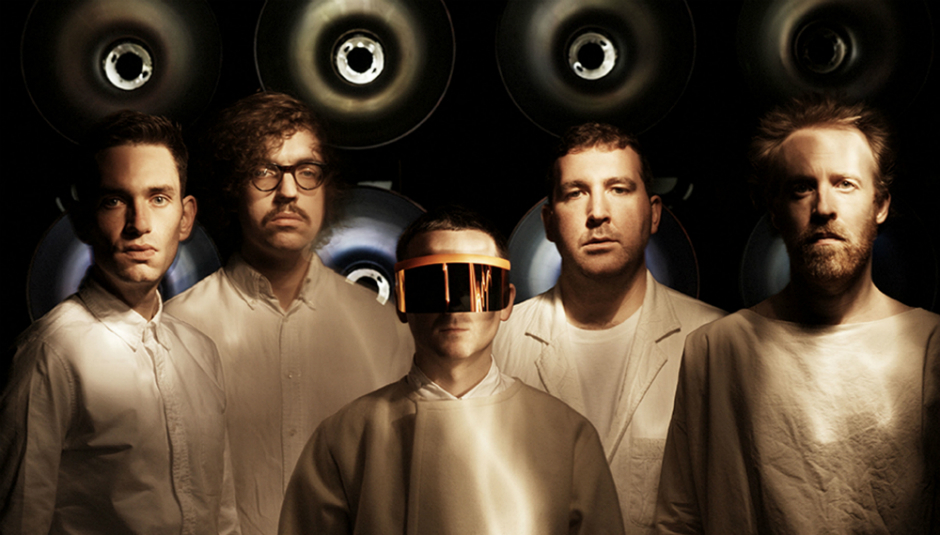 Hope you enjoyed the bank holiday weekend. I went on a boat to Brownsea Island and saw a red squirrel. It was a grand time out, and now I’m back in London.

Mercifully, Hot Chip have offered a great, warm dollop of consolation in the form of ‘Burning Up’. By my mark it’s their best single since ‘One Pure Thought’. Then again, I am a massive sap.

If your tastes lie elsewhere, then Titus Andronicus, Disclosure, LA Priest and should sate your appetite for amazing new music. Enjoy!

If growing up is scary, then getting old is actively terrifying. First times are much harder to come by, cynicism becomes your second language and mistakes take on a permanence they never used to. It’s a wonder adults ever get anything done. We’re all just muddling through, waiting for the moment someone calls our bluff.

Thank heavens then that Hot Chip are ever-willing to stock their heads above the parapet of conformity. ‘Burning Up’ is more than naive, it’s actively juvenile.

I suppose you could read those opening lyrics as a prayer for spontaneity. Any excitement will do, as long as we don’t think about it too much and deal with the consequences later. I don’t think that’s what your favourite synth-pop stalwarts are on about though. Their latest single isn’t trying to recapture some forgotten magic or tease out those character traits that have been smothered by the drudgery of adulthood.

No. ‘Burning Up’ embraces innocence and experience, and laughs at the folly of them both. With glistening fits of synth and boundless reserves of optimism, it pins its hopes on fun to come. Peer into its 8-bit polish and you’ll see the future reflected back in childish hopes and wide-eyed dreams. Go on, embrace it. There’s nothing to be afraid of.

For a man who once sang “Fuck me, fuck everything”, Patrick Stickles sure does care a lot.

Exhibit A: This 9,000 word review of The Replacements’ first reunion show in 22 years.

Exhibit C: The new 29 track rock opera about manic depression, called The Most Lamentable Tragedy, that he unveiled last week.

Although brevity might not be Stickles’ strong point, ‘giving a shit’ certainly is.

Enter ‘Dimed Out’, the lead single from TMLT that elevates fecklessness into an artform. Its narrator may be an “an impatient underdog indivisible”, but that means he’s more than willing to run through a wall or two to see what happens next. The result? A raucous dive bar singalong that reeks of cheap beer and circle pits. Oh, and some Owen Pallett-penned strings. Because this wastrel has gone all-in on ‘anthemic’.

As much as Disclosure’s debut album was critically acclaimed and Mercury nominated, it was also bought buy a lot of people who don’t care about any of that nonsense. They heard ‘Latch’ On Capital FM, decided it was a tune and paid for 12 more songs like it.

You might think this leaves the Lawrences in a bind, when it comes to their follow-up LP. Mass appeal and Pitchfork approval are two characteristics that rarely align in an act. Might Disclosure end up second guessing themselves after a two year absence from the nation’s airwaves? As it turns out, not even slightly.

“We don't want people to forget where we came from,” explains Guy Lawrence about the new single. “This is a big club track in time for the summer."

There’s a nice moment in ‘Regret’ where Jonathan Higgs lets rip with a hearty, bellicose laugh. You hear his tummy shake with derision for the callousness surrounding him and you smile. It’s this sort of tomfoolery that marks Everything Everything out as a class above their British indie compatriots. With ‘Distant Past’ they made a dance track out of staccato guitars, and now they’ve dipped into the niche tradition of protest funk. Their latest single is served up in hulking chunks of lubricated bass and rasping percussion. Then it descends into what sounds a lot like a keytar solo. In short, it’s brilliant.

LA Priest’s ‘first proper show’ took place in London last week and, by any standard imaginable, it was trippy. Sam Dust played an hour-long set in all-white desert garb, insisted on keeping the house lights down for most of the set and spent most of his audience banter reading birthday shout outs from a paper plate. Aside from the recent ‘Oino’, two songs stood out from the gig: ‘Night Train’, which was introduced on white label vinyl earlier this year as “a bit Hot Chip, or Tonetta in its lo fi erotic disco ambitions”, and the significantly more meandering eight-mute electro-pop odyssey.

Now I’ll be damned if you came here looking for a serious review of a song called ‘Party Zute/Learning To Love’, even if it is LA Priest’s new single. So let’s just say it sounds a bit like Daft Punk and inspired plenty of drunk dancing last Tuesday night.

Following on from their recipe for the worst pancakes ever, Metz have cooked up a psychosis-fuelled video for ‘The Swimmer’. It’s wholly fucked and a right old racket, but what else did you expect? Other than excellence.

One Great Song And I Could Change The World

Nice idea. Shame about the execution.

“Down in the dirt. Nothing has changed.”