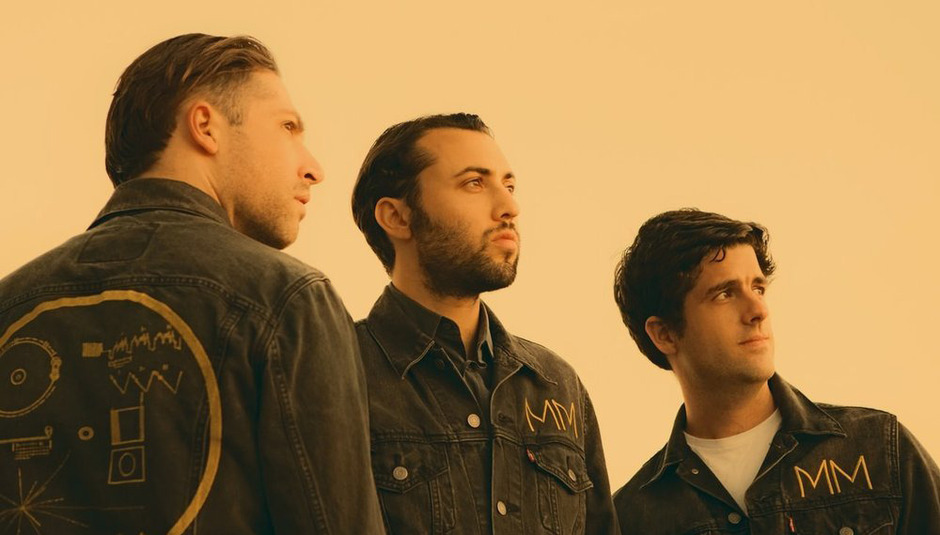 Once upon a time, five years ago to be precise, Mini Mansions made a really great record. Then no one bought it and they disappeared.

Until last October, the psych-rock trio of Tyler Parkford, Zach Dawes, and Queens of the Stone Age's Michael Shuman didn't release a note of new music. Their wry harmonies and wicked organ riffs seemed destined to languish in obscurity. As it happened, the band were very much at work on their next record. Now they're finally back and they've brought company.

The Great Pretenders is an album that's full of pop hooks and star turns. Songs like 'Freakout' and 'Honey, I'm Home' are big, ghoulish stomp-alongs that twist from tongue-in-cheek horror to unabashed jubilance. They're a tonne of fun and seemingly precision-made for festival season. As for the special guests? They don't come much bigger than Alex Turner and Brian Wilson.

To find out how The Great Pretenders came together we sat down with Michael and Tyler in an East London pub. Read on for the eventful story of its inception.

How long have you known each other?

Michael Shuman: I’ve known Zack since I was 11. I didn’t meet Tyler until 2004/5 when I was in college. He went to film school in Santa Cruz. I went to a school for recording and used to come up and play in a band called Wires On Fire. I met him at one of the shows, he used to live with Zack.

Tyler Parkford: And right then, I just knew…

Michael: We heard each other’s solo songs. His were super-impressive, he had this one like T-Rex. It wasn’t until I finished school and touring with Queens of the Stone Age [after Era Vulgaris] that we met at a party in L._A. and talked about doing something casually.

For me it was like, ‘I really want to do pop music and I know he’s fucking awesome at it. I know we’ll probably see eye to eye, so let’s give it a shot and jam.’ But it wasn’t like supposed to be, ‘Let’s have a serious band.’

Tyler: Well, you were pretty serious about that and that’s what attracted me. It’s hard to find people who want to actually be in a band. When we started it, within a couple months we were starting to record an EP.

Even though you’ve already made a record, this album feels a lot like your debut?

Michael: It’s been a long time since we put out any music, so either the people that knew us forgot about us or they never knew about us in the first place. We took a new approach to the band we wanted to be and focused even more on our set-up. I wanted to write songs that were more personal.

How so? A lot of your songs seem to be written in this vaudevillian character.

Michael: To me that’s not true. ‘Creeps’. ‘Any Emotions’. ‘Heart Of Stone’. Those are all talking about me. I’m airing my shit. Those are real situations and things that were going on. I can’t get any more personal and I’d never done it like that before.

So how is ‘Any Emotions’ personal to you?

Michael: Now we’re getting really fucking deep. I was writing a story about a kid with Aspergers that couldn’t understand emotions. They have trouble falling in love. That’s how it started and as we were making the record, I was going through something that changed the lyrics and it became more about me in the end. I haven’t even expressed this....

Tyler: I know you’re dodging around the bullet, but he has Aspergers. Sorry.

Given Michael is in Queens and you’re all doing your own jobs while he tours. What stopped the band from drifting apart?

Tyler: The distance of us not being a continually active band has given us a point of view that a lot of other acts don’t have. It’s made us change in a way that wouldn’t have happened if we toured the record for a couple of years and then wrote a new one. I don’t think we would have come close to this one.

Michael: To be honest, we were constantly writing, constantly recording and figuring out what we wanted to do. It never really stopped. My mind never stopped thinking about Mini Mansions.

I would come home from tour for two or three weeks and almost every day we would be playing together. Even when I was making the Queens record, I was recording during the day and then at night we would go and jam. There was no real break, it was just hard to do it.

What do you do outside of Mini Mansions, Tyler?

So when did you start recording the album?

Tyler: We wrote what we thought was the record two years ago. The we shopped it around and wrote a bunch of new songs while doing this. At that point we were like, ‘Damn! We’ve got 15+ songs that haven’t even recorded.’ Basically, that second wave became the record and the B-sides are that first record.

That’s a bold move to scrap a record.

Michael: We were constantly writing and just got kind of bored. Like any artist, you love your new material more than your old. We recorded ‘Double Vision’ a year and a half ago, that was the last song of the first batch.

There’s a schlock horror vibe to your albums. Where does that come from.

Michael: My mind always goes to darker, more fucked up music. I prefer Lennon to McCartney.

So on that subject, what’s ‘Death Is A Girl’ about?

Tyler: I hear a lot of dance songs that’s talk about the end of the world, or how you should live fast and die young. Living a life of excess that’s very short is better than living a life of restraining yourself. That made me want to romanticise the darker side of living in the moment.

You’ve got a lot of guests on the record like Alex Turner and Brian WIlson. Did you ever worry that might distract from your own songwriting?

Michael: We didn't think so until it went out to the rest of the world. We were so focused on making the best record possible, we didn’t think about what would happen after it’s done. Now that it’s gone out to the press and the fans of those people, you see it play out differently to how you thought.

Tyler: It’s different when you’re in a private zone for a couple of weeks recording and then you bring in people to add to that which was very intentional. It wasn’t like, ‘Man we’ve got to showcase someone.’

Michael: ‘Who do can we get? We’ve got the money.’

Is it frustrating when the guests on your songs skew how their sold and reported on?

Michael: To be honest, the first record was presented as a Queens side-project. That isn’t false, but it’s not what I wanted to focus on. So when we put this record out and it turns from that to other people… I hope that’s not the main focus for everyone when they’re listening to our music.

It can be frustrating sure. I just want people to hear the record. Not just the one song that person’s on. I don’t give a fuck about my ego.

With Alex Turner, I gather he was in the studio on a fairly regular basis?

Michael: Every few nights. He was just like, ‘That shit sounds tight.’

Tyler: We just had this second verse open on ‘Vertigo’, because it needed an alternate persona. So we gave him free range on that, because we wanted a suave, thuggish English voice. You’d think we’d have thought about it sooner, because he was hanging out.

It wasn’t immediate like, ‘Oh yeah. Alex is hanging out. He’d be perfect.’ We had to go through the motions of recording it and really dwelling on what it needed.

Michael: It was basically the last song we did.

How did ‘Any Emotion’ change after Brian Wilson came onboard for it?

Tyler: We didn’t give him that much, other than the song. The recorded everything that floated his boat.

Michael: He gave us a lot of shit.

Michael: There’s a part where theres a four-part harmony. That’s why it’s Brian Wilson. It’s fucking insane. When we got it back what tripped me out was that it sounded like Brian WIlson in the 60s.

So what’s next for Mini Mansions?

Michael: We’re going to go on tour for a year straight, give everything we’ve got to this record and then make an even better one.

Tyler: I think the first record was like a first kiss and this one is like having sex for the first time. Now that we’ve got that, everything else is all kinky. `

Mini Mansions' The Great Pretenders is out now on Capitol Records

You ain’t got no alibi: DiS meets Dap...