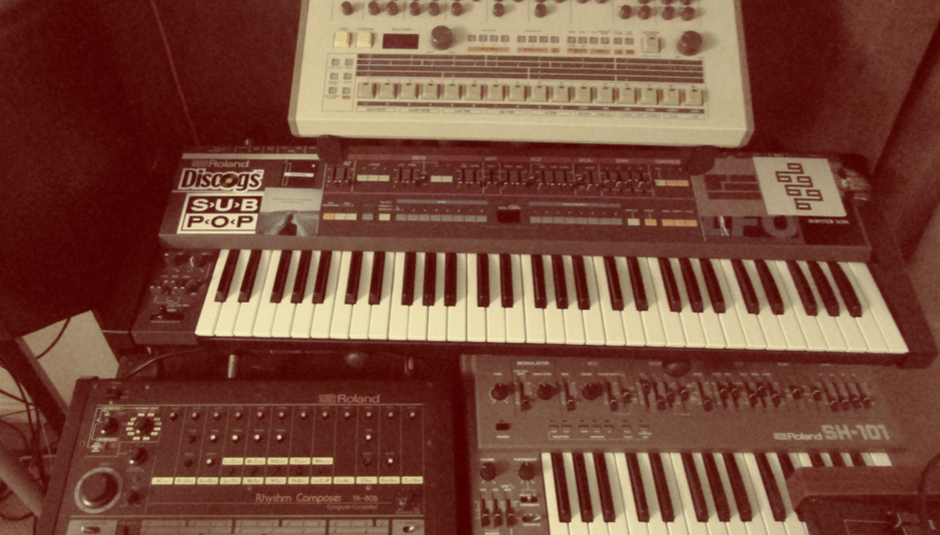 Following the glowing review of their new record Even Temper, electronic duo worriedaboutsatan talk us through their gear.

Over the years, our studio spaces have always revolved around bedrooms, and have been pretty small scale affairs - mainly based around a laptop or a computer running a software package, with a few added extras thrown in for good measure. These days, our studio has moved away from a bedroom, and into the rock n roll surroundings of Tom's spare room. Having said that, it's a pretty big room and right next to the kitchen, so we're never short of a cup of tea, which as any musician will tell you, is the most important thing.

When we first started, we used to run Propellerhead's Reason software alongside Pro Tools to record, and Reason on its own to play live. We graduated to Ableton for both studio and live stuff in about 2009 though, just as we were putting together our last album, Arrivals. We've used Ableton on everything since, as it does pretty much everything we need it to do and offers a greater degree of improvisation for the live set. We used to use a lot of digital synths and sounds (aside from the guitars, obviously), but recently we've expanded our sonic palette to include a lot of analogue synth gear, more guitars, reel to reels, modular stuff, a cello, a theremin… the list goes on. I think Tom has a problem saying no to buying equipment!

Anyway, our space is now full to bursting with various bits and bobs, including this little lot:

Gavin: As you can tell from the picture, I've had this quite a while now - it's pretty battered, and I originally bought it to replace the pedal and amp setup I was using until about 2010. I'm not the strongest person in the world, and having to lug amps and pedal boards around was really annoying, so I switched to a laptop running Guitar Rig, and it really did the trick. It's a great piece of software, and the pedal is great for looping bits of guitars to create massive washes of sound. We also chain my guitar output from this into Tom's laptop live, so he can control a greater aspect of our sound, instead of an amp being louder than the rest of the set (which used to happen fairly often!)

Gavin: After I bought a laptop to use live, I ditched my guitar pedals I used at the time (which was a Boss DD-3 and a Marshall Echohead, guitar nerds). Anyway, I'd sworn off buying pedals and stuff for ages, but over the years, I did kinda miss the analogue feel, so decided to buy this awesome little box last year. It's a copy of an old effects unit from the 1960s called a Binson Echorec - if you google it, you'll probably see a million pictures of Dave Gilmour and Pink Floyd, as he was an avid user of them, and was through my love of all things Floyd that I found out about it. I thought it'd be a good idea to try and buy an original, but it turns out you'll need a few grand to spare. Which I certainly don't.

When I found out that the US company Caitlinbread was making a digital replica, I snapped it up immediately - all the awesome noise, no hassle! The original unit used to have a spinning magnet in it, and would be really really temperamental, as they'd overheat and warp really easily, which this digital copy attempts to emulate. It does it well though, and you can get some really strange noises by fiddling with the delay time and 'swell' parameters. It also does the 'Another Brick In The Wall' style slap delay really well too, so you can live out all your floyd fantasies without breaking the bank.

Tom: We’ve used this on so much, it’s easily had its money’s worth over the last couple of years! I picked it up for £100 from a man on Gumtree who was being forced to sell it by his wife. I think it was meant to be used as a cheap orchestral replacement in the 70s, but it produces the eeriest string sound imaginable. It’s used on pretty much every track from our new album and it sounds incredible drenched in reverb, delay and a bit of overdrive.

(perched on top left of the Logan)

Tom: Although quite a new addition to the studio, it’s already made a nice little home for itself. We used it a lot on our track ‘Church Of Red’, where I made a simple one note pattern and slowly opened the filter over 3 minutes. It’s like atmospheric acid, or something.

Tom: These guys form the majority of our sound palette, and are used in every studio session without fail. They get turned on at the beginning and are the last bits to be shut down. The 808 and 909 drum machines are well known and maybe a little predictable, but you can’t argue with their sounds! The 808’s kick drum combine with the 909’s open hi hats so well- they’re a dream team! The Juno 106 gives us lovely warm bass sounds with bags of punch and the SH-101 is all about arpeggios when we sync it up to the output of one of the drum machines. Having everything laid out in this arrangement lets us jam easily, which is how we make a lot of our music.