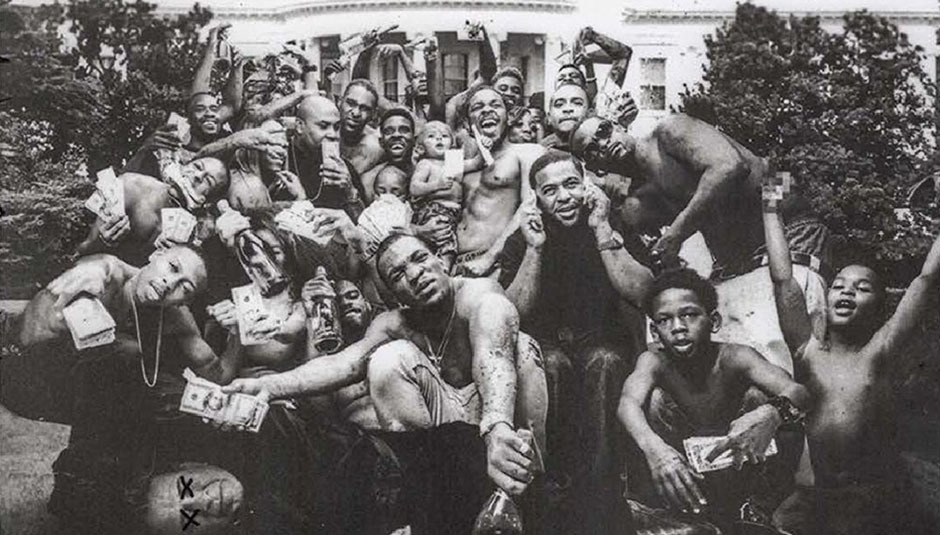 Write what you know, they say. And so Kendrick Lamar made Good Kid, M.A.A.D City. A concept album based on his teenage years in Compton, where gang culture and family were frequently one and the same. The narrative was hip-hop, but its appeal was universal. Anyone who’s found themselves caught at a fork in the road could identify with young K Dot. You were willing him to rise above the lure of petty lootings and retributive shootings. To escape the cyclical nature of inner-city struggle and put pay to that chapter in his life.

Clearly, that happened. Kendrick is one of the three most-feted rappers in the world today alongside Kanye and Drake. “I heard the barbershops be in great debates all the time/Bout who's the best MC?” he proclaimed on 2013’s ‘Control’. “Kendrick, Jigga and Nas/Eminem, Andre 3000, the rest of y'all the rest of y'all / New niggas just new niggas, don't get involved.”

If there’s one thing you don’t want to do as a raconteur, it’s run out of tales to tell. That’s why ‘i’ was such a dud when it arrived last year. Debuting a month after the protests in Ferguson, which in turn had followed the death of Eric Garner, its feelgood Isley Brothers sample was completely at odds with the mood of a culture Kendrick had become a figurehead for. To make matters worse, To Pimp A Butterfly’s lead single didn’t amount to much more than a hook, “I love myself.”

It seemed like a song for Top 40 radio and awards show voters, and it did deliver two such accolades: Best Rap Performance and Best Rap Song at the 2015 Grammy Awards. The kind of achievements that Good Kid… ceded to Macklemore. Until ‘The Blacker The Berry’ and now ‘King Kunta’, the track was lacking for a narrative. Had “King Kendrick” lost his touch?

In hindsight, no. The theme for his third album is now defiantly clear, and it was staring us in the face all along. To Pimp A Butterfly’s is about pride: pride in yourself and pride in being an African American. As with its predecessors, ‘King Kunta’ revolves around a deliberately traditional sample. Its irresistible funk bassline places an emphasis on black heritage. An identity that's been forged through both celebration and struggle.

"Everybody wanna cut the legs off him, Kunta, " hisses Kendrick. "Black man taking no losses."

The reference to Kunta Kinte, a Gambian who had the front half of his right foot cut off by American slave masters, is particularly relevant. Kinte was born c.1750 and died about 72 years later, but his life was semi-fictionalised by Alex Haney. Plot, character and setting are the cornerstone of any great Kendrick track, and here he is cribbing a name that represents the power of storytelling. Specifically, its ability to sum up an ideal.

So yes, 'King Kunta' takes imperious aim at Kendrick’s lesser contemporaries and rappers with ghostwriters. Really, it’s aiming above the day-to-day fray. You can see this on To Pimp A Butterfly’s cover, where a gaggle of black men gather outside the gates of the White House. They're not part of that power complex.

Someone needs to document the state of their struggle with glorious words and full-blooded music. Step forward Kendrick Lamar.

Despite her not having an album out anytime soon, Grimes has had a busy past seven days. Last night her collaboration with Bleachers (a.k.a. Jack Antonoff from arena-rockers Fun), Entropy, debuted on an episode of Girls and it's so-so at best. Certainly not as good as Taylor Swift's 'Out Of The Woods', which is Antonoff 's last big pop production credit. You can feel the track reaching for anthemic status, but in truth it’s just a bit bland.

Fear not, fans of whispish electronica. Claire Boucher also released a demo from her scrapped fourth record that could easily pass for a single from Visions. ‘REALiTi’ is a dense mass of layered synth lines, throbbing percussion and vocals that may as well have been recorded in a wind tunnel i.e. classic Grimes. If you dance alone in your bedroom between bouts of Sonic The Hedgehog 2, then it’s a 10/10 banger.

'Should Have Known Better' is almost unbearable. It's delicate affectations are so intimate that you feel as though you're prying in on Sufjan's grief. In the aftermath of his mother's death, the mercurial folkster can now only communicate in hushed harmonies and gentle flourishes of synth. Although the temptation is to turn away from this naked hardship, it's worth remembering that misery loves company. Hearing Carrie & Lowell in a crowd of thousands will be something else this summer.

Girlpool excel at getting under your skin. Whether they want to rile you up or make you lovestruck, the LA duo demand a reaction. After the hushed swoon that was 'Chinatown', 'Ideal World' is an about turn back to the more caustic guitar sounds of 'Jane' and 'Slutmouth'. Its guitar solo is wickedly ragged, like jagged nails on a glitter-strewn chalkboard. "Put me on a food stamp, and a Hallmark card," sing Harmony Tividad and Cleo Tucker. With songs like this, they should start to dream bigger.

Warpaint grabbed Single of the Week a fortnight ago with the limber swirl of 'No Way Out'. Now that record's B-side has emerged and it's a beauty. 'I'll Start Believing' sees Theresa Way and co cut loose with a guttural riff and wailing vocals a plenty. Like our favourite songs from the LA outfit, it unfurls from a single, captivating lyric and holds your attention from that moment onwards - without giving anymore away. "Daddy left me once you know, he took off when I was six months old," hollers Way and, once again, our attention is rapt.

Clench your fists. Raise them high. Here's a rallying cry if ever there was one.

“We got to re-record the [Simpsons] theme song by Danny Elfman, who I dated in high school. So that was really gratifying.”