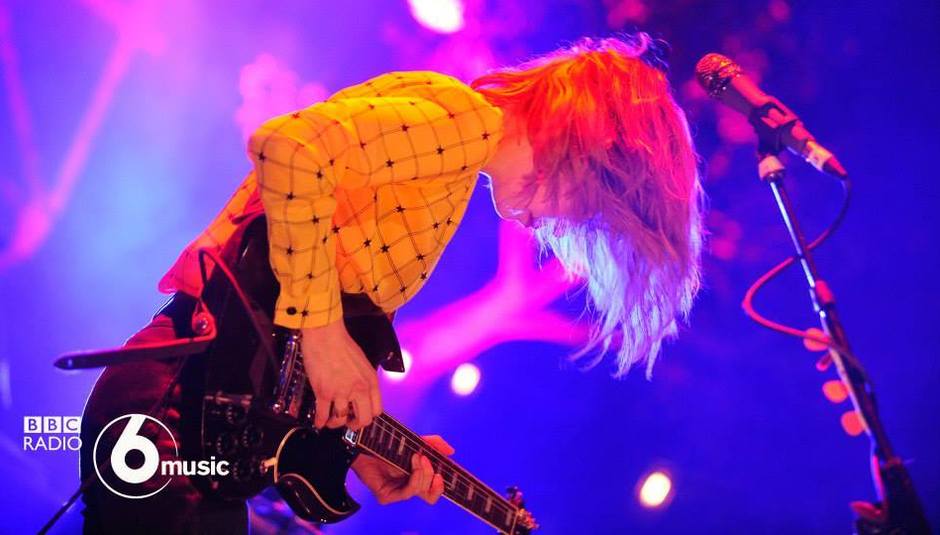 From a Sleater-Kinney masterclass to Mogwai's loudness: 6Music Fest - Day 1

From a Sleater-Kinney masterclass to Mogwai's loudness: 6Music Fest - Day 1

When the line-up for BBC 6 Music Festival was announced a few weeks ago, it was the opening night which captured a lot of people’s imaginations.

After almost a decade away from the UK, the return of Sleater-Kinney was the most mouth-watering attraction. Sharing a bill with The War On Drugs, Interpol and Mogwai, felt like a strange combination: four bands without too much to unite them aside from strong reputations. As it turns out, though, between them they served up a magnificent spectacle to kick the festival off.

Hemmed into a sliver of stage in front of four bands’ worth of gear, The War On Drugs' set kicked off around the time most of the crowd would usually be tucking into their first post-work pint. For all its plaudits, Lost in the Dream hasn’t quite clicked with me yet. Tonight, however, they make a decent fist of demonstrating why they’ve quietly become a big deal. Their rangy jams belie the lack of space afforded to the band (both physically and in terms of set length), roaming off at their own pace, occasionally losing the polite head-nodding crowd before rediscovering their stride with blistering extended wig-outs. The War On Drugs are clearly a band with the power to thrill when they click into gear, something which I imagine they’ll have more of a chance to demonstrate when they headline the same venue in a week’s time.

Seeing Sleater-Kinney tonight is the realisation of a long-standing dream for me. It's a fervour which seems to be shared by a decent proportion of the crowd, given how many people lose their shit when the band emerge.

At first, it isn’t the explosion I anticipated. Instead, what we get is a masterclass in poised and controlled pop-rock. Dipping exclusively into No Cities to Love for the first four songs, the four women on stage illustrate precisely why Sleater-Kinney’s return isn’t just some kind of cynical heritage reunion. This is the reuniting of a group of musicians to continue what they started, exploring new musical ideas as though they’d never had that eight years of downtime.

As the show progresses, the band revisit their back catalogue more frequently, with ‘Jumpers’, ‘Dig Me Out’ and closing song ‘Entertain’ in particular unleashing the fiery energy which characterised the best of Sleater-Kinney’s first phase. They’re clearly thrilled to be back, with Corin Tucker spitting her words out as if for the very first time, while Carrie Brownstein triumphantly whirls around wielding her guitar like a machine gun. Perhaps predictably, their set proves to be one of the quickest forty minute spells of my life. However brief it may have felt, it's a welcome reminder that no matter how sad, old or jaded we become, there will always be these special bands like Sleater-Kinney who can still make us feel like we can change the world.

The clear problem facing Interpol is how the fuck they follow up what we’ve just seen. Their response is to launch into something of a greatest hits set including a ferocious opener in ‘Say Hello to the Angels’ and a predictable but triumphant finale in ‘Slow Hands’. It’s ‘Evil’ which is the true highlight of Interpol’s performance, though, with that floor-shaking bass and that none-more-funereal vocal combining to create the most unlikely of singalongs.

Interpol’s delivery of these songs is slick, professional and polished throughout, and it’s clear that this is a band who know exactly what they’re doing. We take them for granted a little bit in 2015, and the consistent ‘Interpolness’ of their records creates an unfair perception that we’ve heard it all before, but tonight displays a lot more sharpness and vibrancy than they’re credited with. A lot of this comes from Daniel Kessler’s lively, and infectious presence on stage, which is an ideal counterpoint to the brooding straight man to his left in Paul Banks. What it all adds up to, is that against the odds, Interpol have managed to make a crowd addled by Sleater-Kinney pay full attention to them.

At this point of the evening, the excitement generated by what we’ve already witnessed and the prospect of Mogwai appears to spread to Mary Anne Hobbs, whose introduction gleefully implores us to “Give it Up for Mogwai” like we’re at the Radio 1 Roadshow or something. I soon realise to my horror that I’ve forgotten my earplugs, so I’m going to have to ‘enjoy’ the sonic onslaught bare-ear. Of course, we all know Mogwai are LOUD. No matter how many times you see them, you can’t quite appreciate the sheer scale of their loudness until it’s there right in front of you. More accurately, until it’s surrounding you, guitars gripping you and squeezing the breath out of you and cymbals stabbing you in the ears. The effect is physical, somewhere between pleasure and pain. Disorienting, at times. Ultimately, it's a glorious display by a band well and truly at their peak. Even when they’re stepping out of their comfort zone and having a crack at ‘conventional’ rock music like they do on ‘Teenage Exorcists’ and ‘Mexican Grand Prix’, they’re still miles better at it than anyone else.

As ever, ‘Mogwai Fear Satan’ is the apex of the set. It slow-builds, tantalisingly, eventually developing into a massive climax of noise which subsides into lullaby. Your mind wanders, only to jump out of your seat when the shit-yourself noise returns without warning. If Interpol’s bass shook the floor, then this must be rattling the windows out of their frame. Christ, there’s probably even people passing under the venue on the Metro wondering what the hell that racket above is. It’s at this point that you’re inclined to marvel at how far music has come in the modern age, that a few blokes with some planks of wood with strings on, some drums and a bit of electricity can have such an effect on you. They're practically altering your chemical composition just by playing their songs. It says a lot about what Mogwai do that the dark and dynamic ‘Hunted By a Freak’ represents some degree of light relief. They finish with ‘We’re No Here’, before sending us all off into the night worrying about whether we’ll even hear any of the rest of the festival.

For more about the 6Music Festival visit bbc.co.uk/6music.