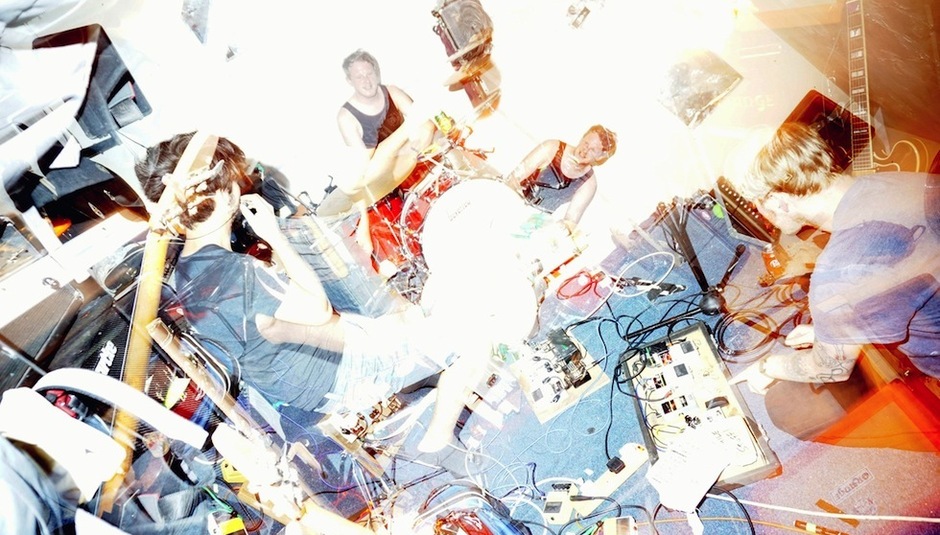 Are We A Band Or Not? DiS meets USA Nails

Are We A Band Or Not? DiS meets USA Nails

“I don’t think there’s any danger of USA Nails being snapped up by a major,” quips Gareth Thomas, guitarist in the disorientatingly loud London four-piece, USA Nails. Their 2014 debut Sonic Moist was praised within the punk/hardcore/noise-core/metal/whatever online-media. It made some album end of year lists, but not Mojo’s. Over a phone line we’ve been discussing the state of the industry, to a degree. Signed to DIY stable Smalltown America who released Sonic Moist, USA Nail’s debut also confounded people; some ears simply unable to get anything from the noise. Perhaps the confusion stems from the conundrum; are USA Nails No-Wave or are they punk rock… or hardcore…

They’re punk rock, sure, in the way punk rock doesn’t have rules, a gantt chart of aspiration and instead spreads through collaboration and a need to act on exciting impulses.

“We didn’t approach Smalltown America,” Gareth explains, “I’d known Ash (Pocock, A&R/PR) from Smalltown for some time around another band I’m in, Mayors Of Miyazaki. Smalltown had sort of courted Mayors a little bit, there was “maybe we’ll put out you album,” but nothing ever really happened with it.”

“So after we’d recorded the USA Nails album I went to Ash, as he’d previously got Mayors a bit of press, and as we didn’t have a label or anything lined up, I asked him if he’d be up for sending it out to a few places. We were pretty proud of it and were keen to get it out there. His response was that he thought it was great and he was going to send it to Andrew (Smalltown America boss). Andrew also passed on that he liked it and wanted to work with us on it. So we didn’t really approach them, but they seemed to be excited by it and we were stoked that they were excited by it. That’s how that worked. We don’t always agree on things, but they’re eager to hear our opinions and keen to collaborate in a way we’re comfortable with. That’s great.”

“We also have a label in France, which happened in a similar way, with Bigoût Records. It’s a great label putting out some brilliant releases. I actually approached them initially asking for a gig in Lyon but when they heard the record they wanted to help put it out. So they worked an agreement with Smalltown and are dealing with it in France.”

“Having said all that, the labels that put out the tape version (I Hate My Records and Unwork), we full-on approached and hassled, all guns blazing like.”

So turn it round. Don’t put out a record to tour. Just tour. The band are touring France and Belgium, like… now.

“I booked the tour. That’s one of my jobs in the division of labour in the band. The DIY scene in London is very co-operative, so I email lots of friends, asking-for and sharing contacts. Having all been in bands who’ve toured extensively has helped too, I’m not going to lie about that.”

“Most of the people in Europe that I know as promoters, I count them as friends more than promoters. We don’t have a booker or anything so we do it ourselves. We just wanted to go so I booked it. It’ll be a week in a van being smelly, having fun, sitting around and sleeping on hard wood floors. A holiday of sorts.”

Are USA Nails No Wave?

They all play, or have played in other bands. Artists working together to express something interesting, something new that may well be inspired by music, or art, or theatre but is what it is, not what it’s inspired by. USA Nails is where the artistic gloves come off, get pissed on, then put back on to headlock a Big Muff.

“I’m in three projects that are active at the moment,” Gareth continues, “Mayors Of Miyazaki is a band that I play guitar and do vocals in, in Silent Front I play drums and in Nails I’m pure guitar. There are lots of different things, different musical styles that I like to explore. In some bands it doesn’t seem appropriate to pursue certain things. The other bands that I’m in are all quite different in terms of the creative process. To be able to exercise different ways of making music, different ways of doing stuff is really exciting.”

“I guess because we do things a certain way in those other two bands - both Silent Front and Mayors pay a lot of attention to detail and spend a lot of time agonising over quite minor things and crafting songs very precisely – but in USA Nails we try and go with our first instincts and trust our guts. Because I get to do the really involved version of the creative process in Mayors and Silent Front, I don’t feel like I have to or want to in Nails… I can separate out the way that I do things. I’m not so precious, I try not to think about it and if something does end up a bit shit, we just throw it away because we haven’t spent so long over it.”

“In USA Nails we didn’t set out to make a certain type of sound. We just got together in a room for the first time and the sound came out that way. It wasn’t that pre-meditated I suppose. I dunno.’ None of the bands, well, some more than others, none of the projects we’ve come from are pop.”

“I’ve occasionally played in an ace noise outfit called Sly And The Family Drone, but outside of that, I’ve never really got to explore making noise in the other bands. Everything’s note for note, beat-for-beat the same thing each time and I reckon Steven (Hodson, singer) and Matt (Reid, drummer) would say the same thing about their former projects. Nails is an opportunity for us to cut loose and just concentrate on enjoying ourselves. We’ve all been doing music for a number of years now it feels like we’re all ready to just have fun with it. We’re all into noisier bands and weird stuff, but I guess in all the bands we’d been in before we’d not gotten to go all the way out there. USA Nails is a chance to explore.”

“We recorded ‘Sonic Moist’ in a day. We booked a day in a studio, Bear Bites Horse in Haggerston. Our friend Wayne runs the studio, he’s in a band with Stuart… Stuart used to be in Nails as a guitarist. We didn’t necessarily intend to record an album but as we approached the day we thought, ‘ah, as we’ve got 10 songs let’s do them all in a day’ why not? So we did it live, vocals and everything with only a couple of little overdubs. Steve wasn’t playing guitar then, so it was easier for him to concentrate on vocals. We didn’t really think it through we just sort of decided to do it. Maybe if we’d had our time again we’d have spent a couple more days on it but I quite like the aesthetic of the album, it’s not perfect but it is what it is.”

“It’s weird. We got contacted by some fishing web-site in America. They had an alternative fishing programme with really fast edits, like MTV but for young greebo fishermen or something, and they approached us and said they wanted to use our music on their fishing show. My response was ‘urr, I don’t know, that feels a bit weird.’ The boys thought it sounded hilarious and were not really bothered, but it felt a bit weird to me. I’m not vegetarian or anything but it didn’t sit right.”

Every band wants to be that anomaly, and USA Nails really are one. An anomaly with a purpose, to make the music they want to, the way they want to.

“When we get back from tour we’re going straight in to make our second album. We’ve booked the studio for four days. So we’ll take our time on this one.” 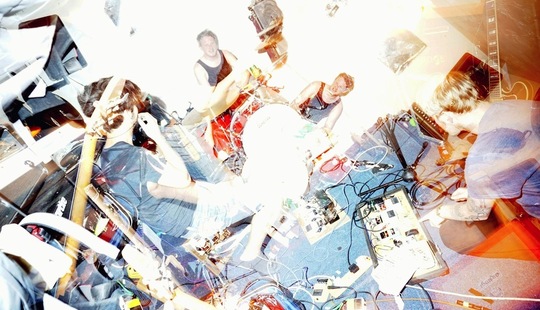 DiS meets James Roberts of The Sea Ur...