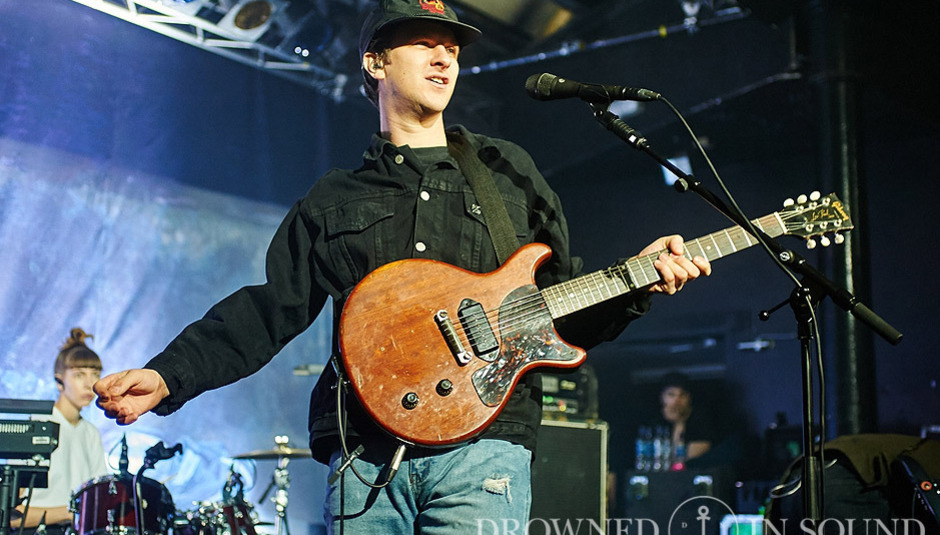 A wise man who once lived in the hulking shadow of Ally Pally called it a gothic pile of shit. That’s pretty harsh, but anyone who's been to a gig there lately might be able to see where he was coming from. Whether it’s the grimy fag butt mulch underfoot or the four-year-wait for the sticky portaloos, the venue’s innards leave something to be desired.

But this was not always the case. Alexandra Palace was visited by 120,000 inquisitive Victorians in just 16 days before its first monumental fire. It was the location of the very first television broadcast anywhere in the world before the building burned down for a second time. Now it is the estimable host to famous names and teeming fans alike. And through all of its reinventions and reimaginings, the People’s Palace has always stood firm on the hill with one eye turned to London.

It is like a grand snail shell moved into by a creature of a new era. Kids in knitted jumpers, caps at whatever angle might be the right angle to be aiming for this year, tiny ant people trying to fill up a cavernous space.

Suffice to say the building has seen a lot, and who knows what it will come to see and be seen as in the future. Will these be remembered as its glory days, a place truly of the people, for the people, muddy knees and all? Whatever the answer to that question, there’s no doubt that the bands lined up for the evening’s entertainment shared a certain kindred spirit with their stage.

Any fan of Jamie T will know how much speculation there has been about his authenticity, his right to talk about the London streets like he owns them. Everyone remembers the Panic Prevention days and that bolshy little kid jumping about putting the booze soaked world to rights. Some people said he was putting the accent on, and some said he’s a public school boy so doesn’t know what he’s on about. But most people just said it was all pretty awesome either way.

Support act Slaves’ passion is reminiscent of first-wave Jamie T, still with that bright eyed getting-closer-to-infamy twinkle in their fingertips. They wrestle up a pretty convincing tongue-in-cheek take on macho booze culture. Sure, they’re garage punk and dress like it’s a joke and act like it’s a joke but hey, maybe that’s just how they like things. On the massive stage they looked smaller, more tentative than in the ferocity of their more intimate gigs. But the Kentish twosome still had it, from unequivocating snarl and flouncing hips to boisterous chemistry and all the enthusiasm of a llama on speed. But the thing about putting on an act is knowing how far your crowd are going to take it. This lot were young and aggressive and were sucking up the violent undertones through their eyeballs. Every other person turned out to be just about too drunk to remember their limbs and no one cared whose faces they slammed into. Watching an unconscious girl dragged over the barrier to everyone’s delight blurred the line between the act and the reality. Slaves are awesome, but do they know if their fans are in on the show?

But what everyone really came to see was what face Jamie T has been wearing these days. From the off it was clear that he still wore his stage presence as comfortably as his cap. But this time around the man wore his age wrapped around him as well. He was more considered and his voice less belligerent. As we found on his new album Carry on the Grudge, the boyish intensity had been replaced by a more melodic, ruminative style. The set was laced with fantastic upbeat interludes from both the new album (think 'Zombie' and 'Rabbit Hole') as well as from the long list of classics (he played 'Sheila' even though that drunk guy hanging out at the bar swore that he knew that he definitely wasn’t going to play it). But the rest of the set felt perfectly comfortable mellowing it down like a warm hug with those new gentler, violin-featuring-type-numbers. It is five years on from his last album and music years (like dog years) can change a lot. But time has weathered neither his talent nor his following. The room vibrated with excitement from Mr T’s first intake of breath to his final thank you. Every person in every bit of the packed room knew every single word. Even to those less famous ones on the middle album. Somewhere in the crowd his parents must have been mighty proud to see the jumping and the dancing and the joy each new track sparked. Even though he didn’t have so much of that old banter in between songs it didn’t dampen the mood. And that is because the music brought us close and told us as much about his life as any interview or magazine profile piece could.

Just like Ally Pally, it is impossible to miss the fact Jamie T has come on a long journey. His music is in some ways a world away from its roots, but whatever anyone made of his first incarnation, this one feels authentic. Let’s hope it sticks around.