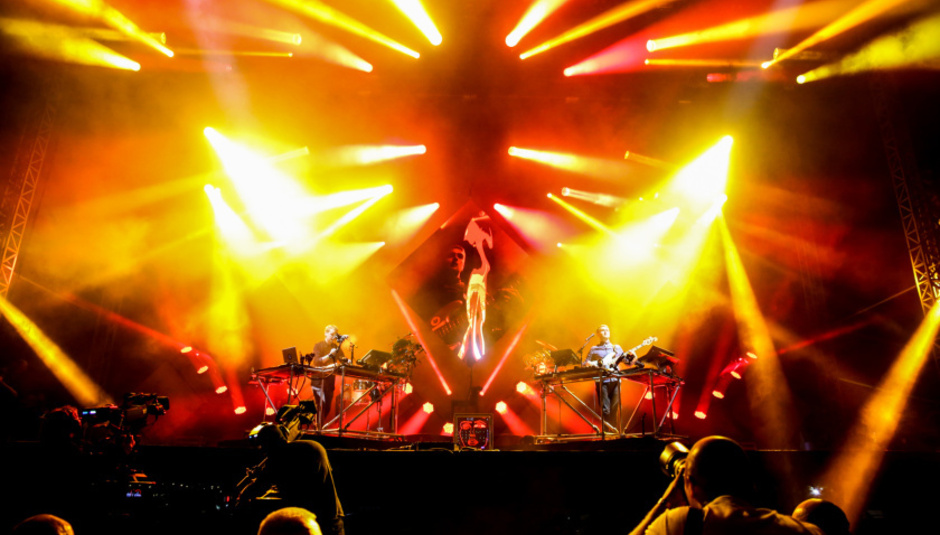 On a warm Thursday morning at the beginning of September, the docks of Southampton and Portsmouth are lined with fresh-faced teens and young adults itching to get to the Isle of Wight; a phenomenon only likely to be observed twice a year – this time round it is for Josie and Rob Da Bank's Bestival.

Theme-wise, last year’s HMS Bestival has washed up this year on a desert island of disco – the sailors and trawler men of 2013 have abandoned ship for Hawaiian shirts and cocktails.

New to Robin Hill Park this year are a number of stages and quirks. Most noticeably: the 10ft wide disco ball which sits tentatively where a blow up Lionel Richie head rested in 2013. The structure has officially been announced by the Guinness Book of World Records as the largest disco ball in the world – a hugely successful plan hatched by disco maverick and Sunday headliner Nile Rogers in an attempt to create the greatest disco party of all time. Other strange punctuations on the festival’s landscape include a 9ft playable 909 drum machine, Oberon’s Observatory, a patch of grass dedicated solely to the great sport of swingball and a myriad of comedy shows, plays, arts and lectures dotted around the Ambient Forest and within the Bestiversity to ponder on in between shows.

However, by far the most impressive addition to this year’s festivities was the intimate and touching Classic Album Sundays experience presented by Klipsch Audio in the Ambient Forest. Here hoards of the festival’s more mature and weathered pundits congregate to listen to an uninterrupted replay of their favourite albums on vinyl through one of the best hi-fi systems the world can offer. Queues in the forest began up to half an hour before each playback, but the crystal clear clarity of every nuance and every detail in each and every song played made the wait worth it. The Classic Album Sunday crew saw playbacks of Jeff Buckley’s Grace, A Tribe Called Quest’s Midnight Marauders, Bob Marley’s Catch A Fire, Lou Reed’s Transformer and many more; all played underneath dim lamplight and the ambient glow of valves sitting next to huge wooden speakers and each beginning with a brief history and context of the record as well talks from the likes of Don Letts and DJ Yoda. The experience was at times unsettling, extremely stuffy, sweaty, but completely and utterly captivating.

Bestival is undoubtedly a festival built around electronic music – and this year is by no means any different. The line-up features sets from the likes of Eats Everything, Bicep, Dusky, Chase and Status, Gorgon City, Jaguar Skills, Annie Mac, Monki and Route94, and that’s just from The Port – the festival’s pilgrimage point for house, dancing, lazers and rave. Across the rest of the festival Caribou, DJ Yoda, Ed Solo, Skream, Artwork, Hackman, Bondax, Bonobo, Karma Kid and countless more are tearing up what is becoming an increasingly young line-up and audience. It's these acts that most pundits are here for – plus Outkast, of course.

The only problem with the volume of DJs is that you are extremely likely to hear the same song a lot more than once, but no one seems to mind that much – they are too engrossed in the thump and joviality of dance music. It is hard not to be engrossed by it too. However, this has left some bands with not many people to play to. The Wytches headlined the new Invaders of the Future stage on Saturday to an extremely deflated audience – they performed an intoxicating set of their macabre grunge under dim lighting and fog to an all too empty crowd.

The Main Stage and Big Top also seemed lacklustre at times. Sam Smith performed a rather banal set of ‘white soul’, excluding a rendition of Arctic Monkeys’ 'Do I Wanna Know', following a rowdy special guest performance from Lethal Bizzle. Over at the Big Top, special guests came in the surprising shape of The Kooks – bringing a horde of youths back to their teenage years in the mid-Noughties with a spectacularly tight set of classics ranging from ‘Naïve’ to ‘Ooh La’. Midland psyches Temples also suffered a rather diminished crowd, half full and not really paying much attention. Disclosure, however, had no such problem on the main stage and performed an incinerating set of their garage stylings.

But, the reason everyone’s really here, is the incredible headline booking of Outkast, Foals and Chic with Nile Rogers. The latter came on in a blast of unadulterated disco magic – dimly lit by the raised giant disco ball spinning in the distance. They did their usual round of Chic songs: 'Le Freak', 'Everybody Dance', 'I Want Your Love', as well as a host of tracks penned by the great Nile Rogers – 'Like a Virgin', 'Get Lucky' and 'He’s the Greatest Dancer' all got air time to a crowd drowning in funk. A sombre moment came when Rogers informed the crowd his friend and guitar technician of nearly 20 years had died just before he came on stage - he also spoke about his battle with cancer, but it proved only to make their moment at the festival all the more memorable.

Outkast proved another of the most memorable moments, opening with the topical 'Bombs Over Baghdad' and performing incredible renditions of their biggest hits 'Ms Jackson', 'Hey Ya' and 'Roses' to an elated crowd brimming with nostalgia, albeit slightly confused by the shock of white hair poised on Andre’s head. However, the underdogs of the headliners, Foals, proved to be perhaps the most deserved of their position. The crowd was not incredibly busy and even the biggest Foals fans weren’t quite sure if this was going to work on a big stage. It did. To my amazement the sound carried throughout the entire main arena, nothing was lost and it finally seems that the band have hit the heights they deserve.

There seems to have been a change in the winds this year at Bestival. On one side there has been a noticeable increase in EDM and people who actually use the term EDM. The hippies, moustached circus type gypsies and crusties all seemed to have disappeared, disappointed by the vast growth of the festival - there are people here who actually showered! Everything has got a little bit more corporate - I’ll leave you to decide if that is a bad thing or not. There is definitely something changing here and in general festival culture, but nonetheless it is impossible not to come back without a severe case of the post-Bestival blues.