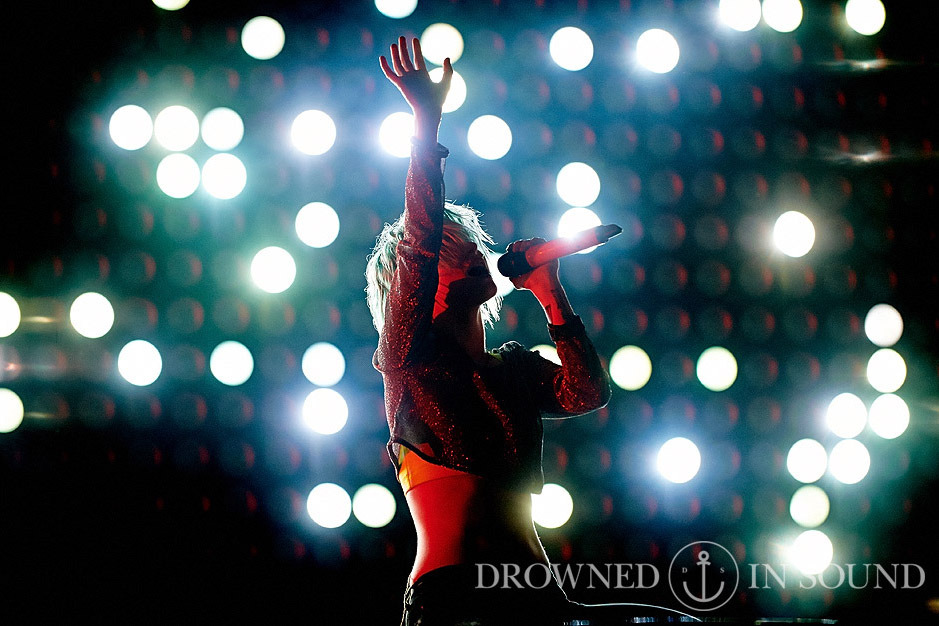 Reading 2014: Paramore - Band of the Weekend 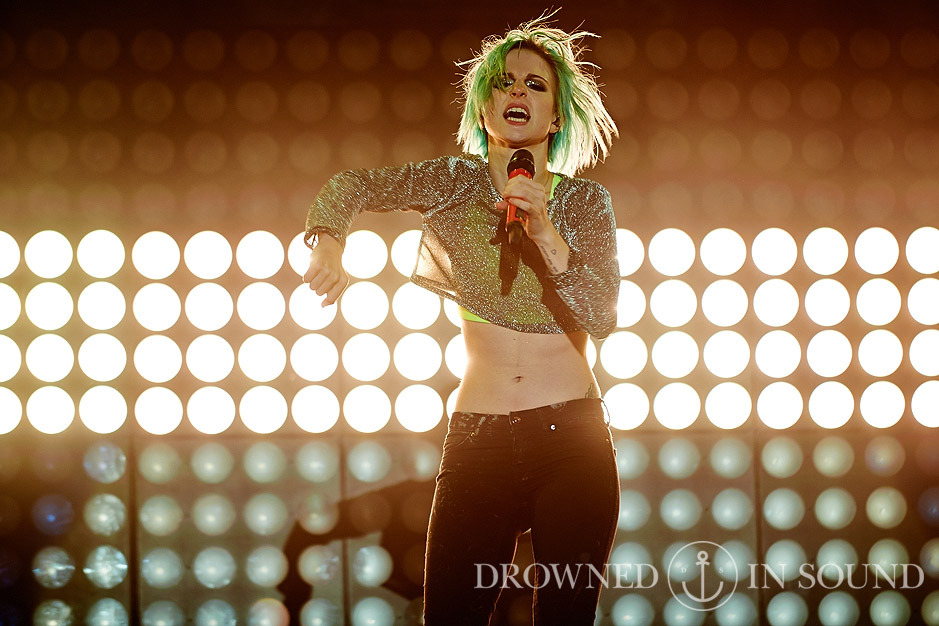 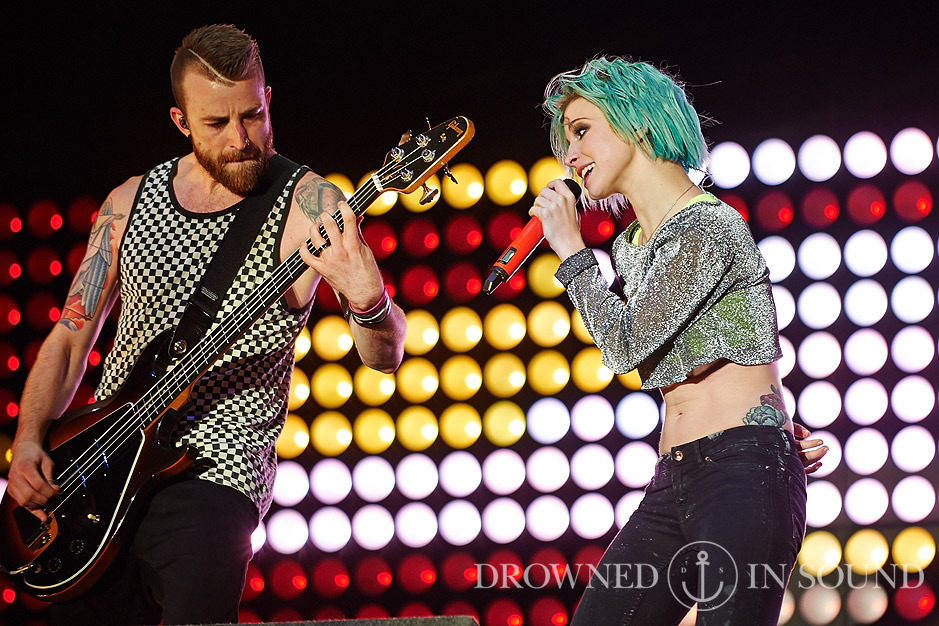 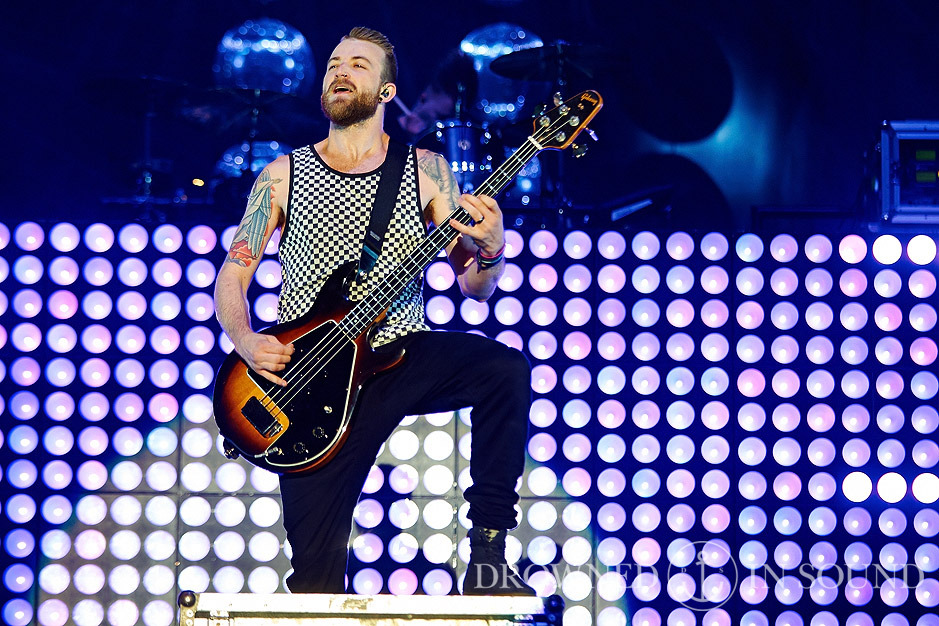 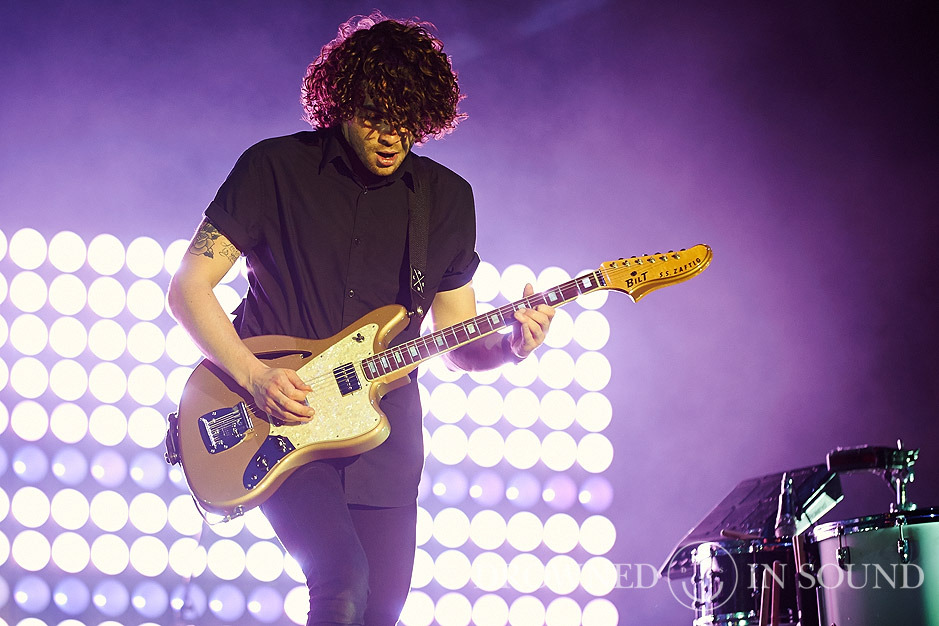 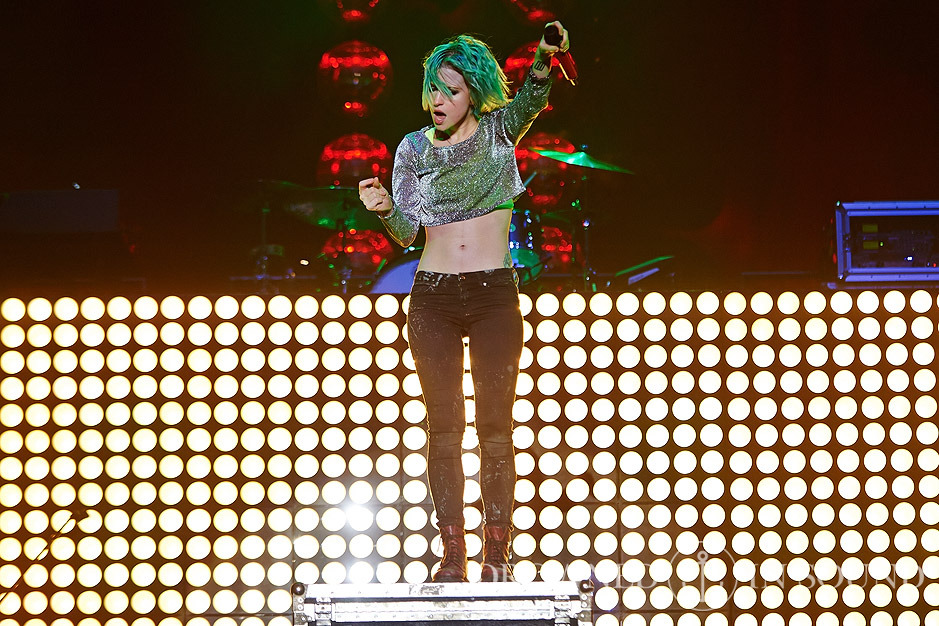 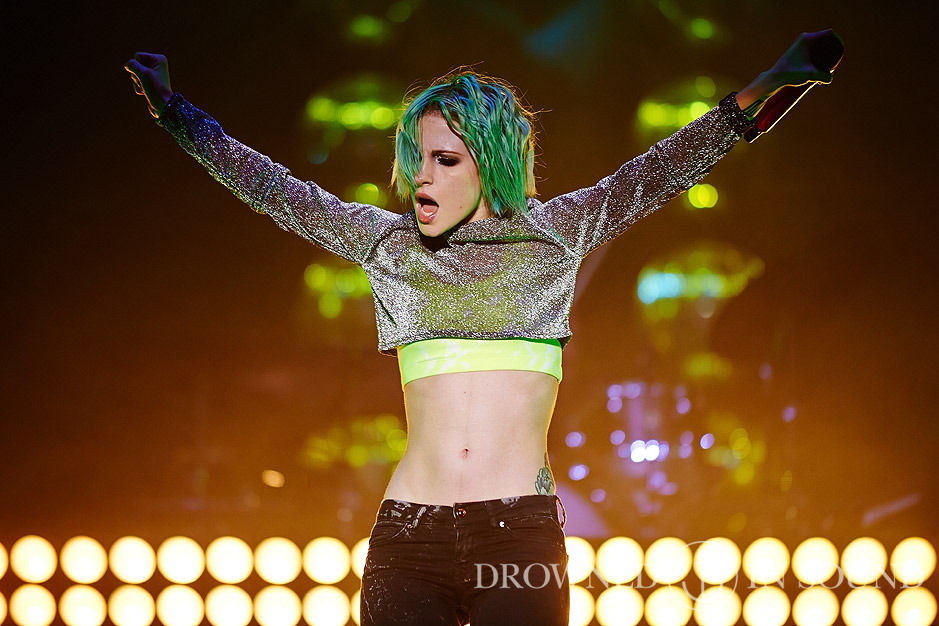 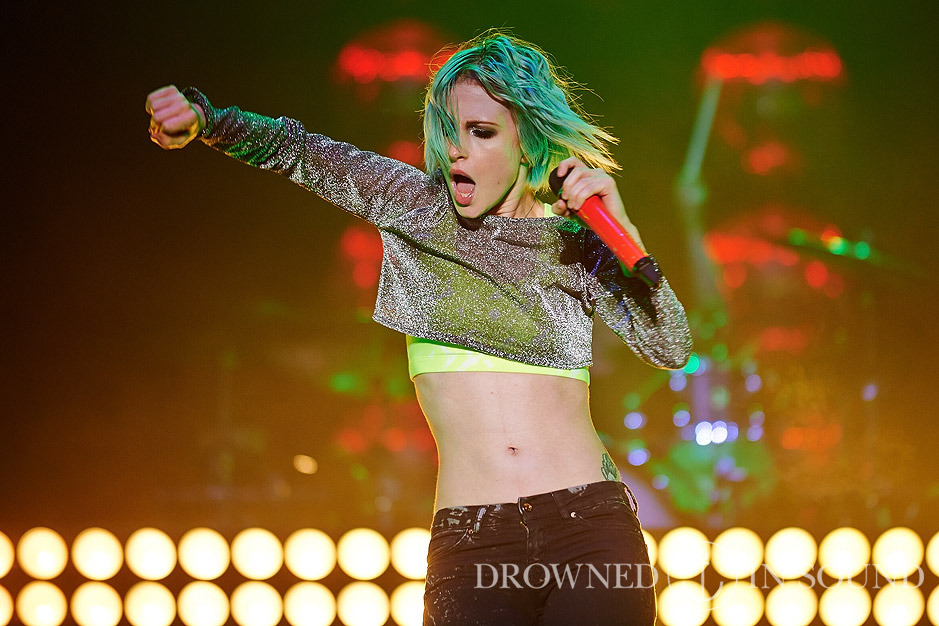 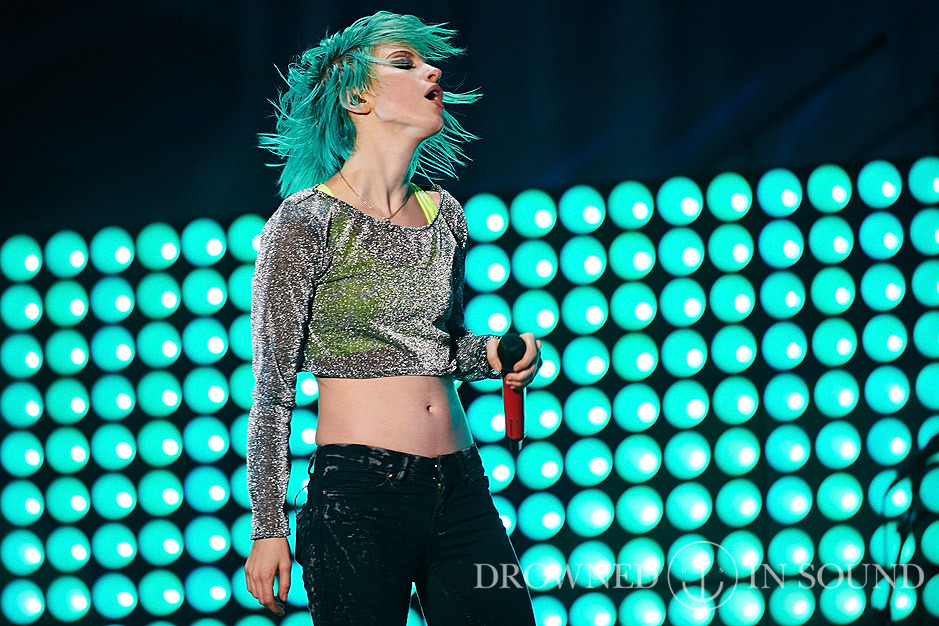 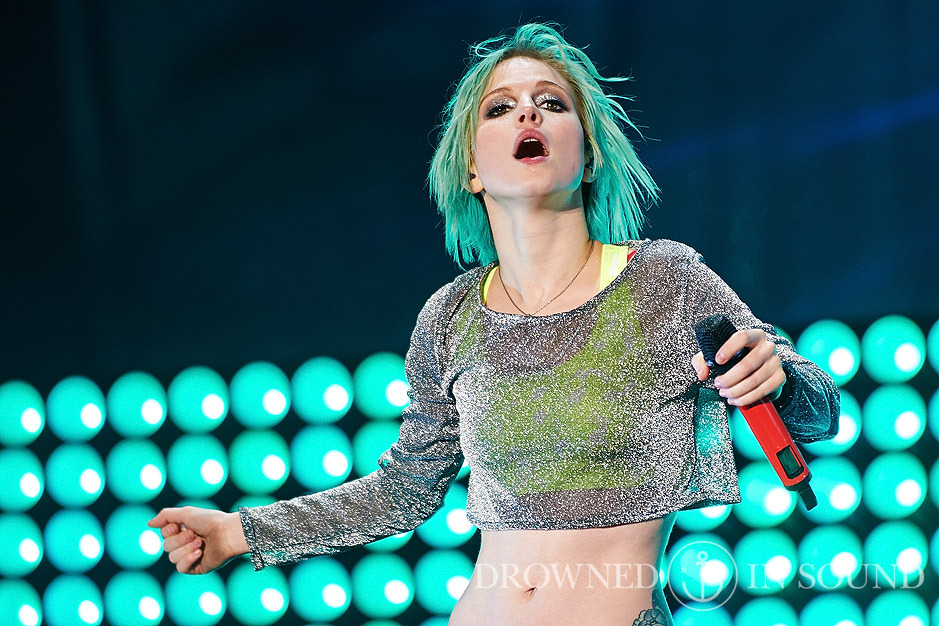 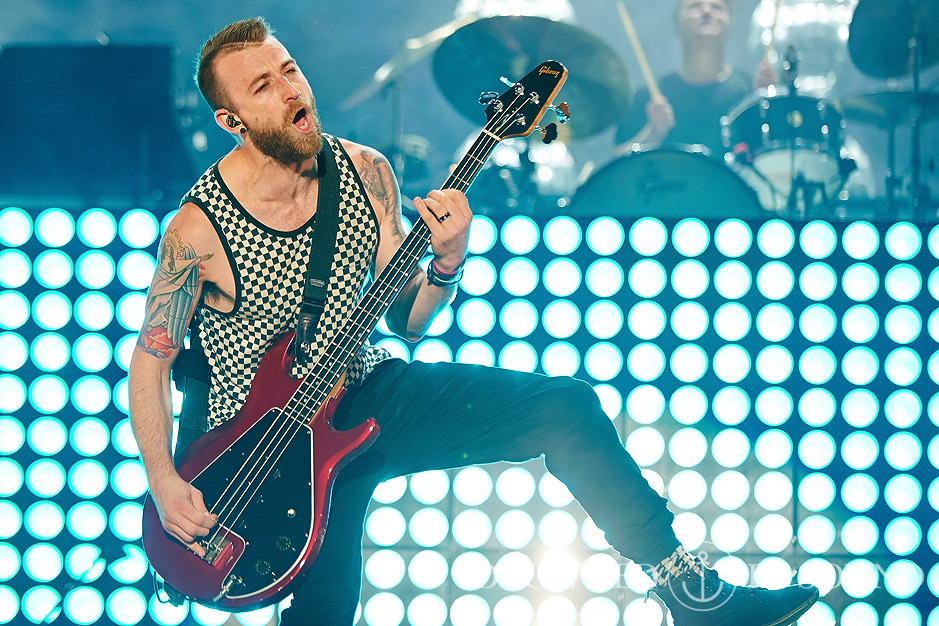 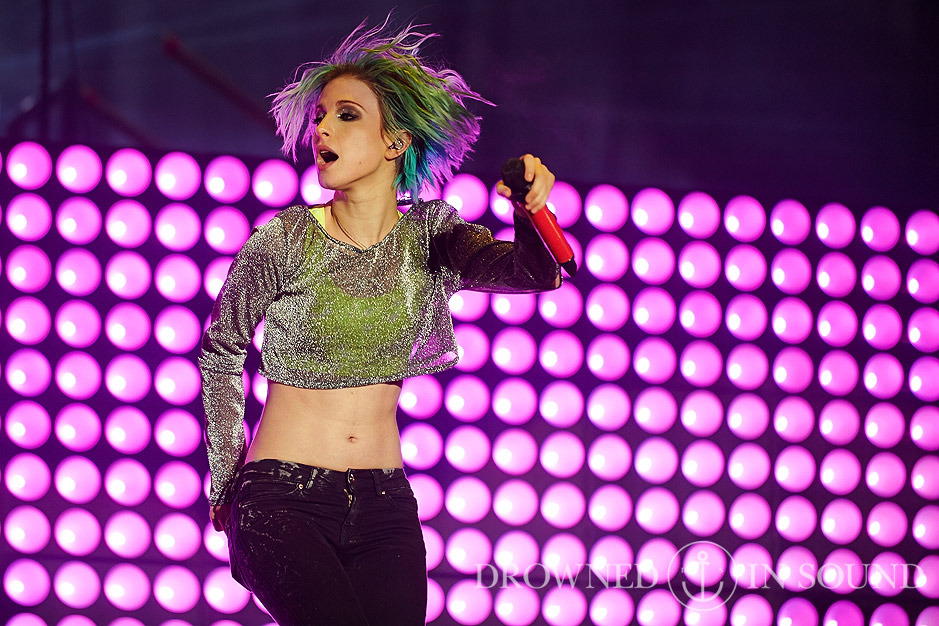 Woah-oh.
She spins.
She spits.
Every move she makes is syncopated to a beat or a thrust of noise. No matter how hard the lights dazzle in the twilight or how many flips Jeremy & Taylor (who are awesome musicians) do whilst still playing bass and killer riffs, it's incredibly hard to take your eyes off of Hayley Williams. As the singer, spokesperson and spiritual leader of Paramore, she's a vortex for your attention. She pirouettes like a kid flying down a hill and with each spotlight encased twirl, she brings this huge festival crowd into her orbit. It's the sort of merry dance that gives a rare glimpse of the DM-wearing emo queens' parallel life in which she performs in musicals.

Williams is a fantastical rock star that's part cartoon-ish fish out of water, part mystical force that owns every inch of the stage. A little Gwen Stefani, but a tiny bit Rivers Cuomo. She's the coolest kid in the global village and she bounds around as if it's a rehearsal in front of close friends. And then she speaks and she clearly gives a damn. She cares a lot.

Despite the chart-topping singles, this show in a far-off land, a decade or so since they began, clearly means something to her and the other two pillars of the Paramore trio (you noticed the symbolism of the logo, right?) (of course!). The trio have laid the foundations over the past decade, so this isn't some pre-rehearsed 'woah, what a moment' moment, it's about a band reaching a notable landmark in their career: headlining Reading (sort of. They're sharing the bill with Queens of the Middle-age, who haven't put out a great record in over a decade, but there's no room here for negativity, as Paramore will headline the Leeds leg of the fest tomorrow!). There's none of that 'we're amazing, thank you for letting us have this amazing life' nonsense that some acts accidentally spool out; Hayley wants a connection that her heroes Morrissey and Robert Smith would never be so blatant about seeking. These are disconnected times and she understands that a show is more than just the pinnacle of most people's summer, it's about a tribal gathering. We all want to feel a part of the show and we're welcomed with a sweaty embace. Sure, for some the bluntness may have a hint of insincerity, like an air stewardess thanking you for flying Paramore airlines, especially to earnest English ears, but she has an an honesty that's undeniable... And undeniable is the word of the night as this cavalcade of greatest hits and awesome other bits blitzes us from start to finish.

Lost in the joyous melee, I/we bounce and sway through songs that have more hooks than a branch of Ikea. It's these undeniably catching melodies that have drawn us - and the thousands watching at home - here, toward the Main Stage of the Reading festival, to lose ourselves in the lights, the leaps and these tales of hope. Right now, nothing else exists.

Not a single beat is wasted. Every riff has a purpose. There's a clarity to this songwriting that comes into sharp focus tonight as people sing-a-long with aplomb. When the PA cuts out, the crowd just gets louder. Over 50,000 people sing every note! I mean, every note, not just the lyrics, but every riff and drum-tish and those bah-bah-bu-bah-bah intros. And not just the singles. Every note of every song. This is a show like no other and the reaction to these huge chart-topping songs and the darker, more Interpol-y ones ('Last Hope' 'Part II'), boy oh boy, the fandom it is unreal! It is inspiring. It is heartbreaking. I can almost feel myself welling up when a fan from the front row - dressed as a dinosaur - takes the stage. WHAT? It's just the breeze in my eyes...

Despite a few snarky heckles early on, the doubters are soon silenced. This is a proper festival feast and has me thinking back to their own shows last year, when the set drifted into a cover of Fleetwood Mac's 'Landslide' - which may be better known in a room of black tees as the Smashing Pumpkins version of the song - that trio could be half-saying what I’ve been half-thinking for quite a while: they are this generation's Fleetwood Mac. Not just because of the divisions in the band, nor the steady string of hit records, it's the way they've pulled Rock & Pop cheek to cheek, not unlike Stevie & Co. That statement may not seem as utterly preposterous years from now, but it'll take a generation of two of the likes of us growing up to truly realise that there's something crystalisizing within these songs that will lock this moment in time in amber. There's that the optimism for a brighter future brushing against the hurt in our hearts, and the ache of the seemingly endless end of youth. Despite them seeming like another band, who have millions of fans online, writing straight-up crowd-pleasing emotional rock, there's a lot more going on here, but I'm not sure exactly what it is, and anyway, I'm too busy throwing my head around and singing 'Don't go cryin', to your momma...'

As the set ends, I flip open my phone - as you do - and notice my social media feed is full of snobby haters watching on TV, mixed with a few who seem to have 'got' what the Paramore party is all about. I kinda wish I dragged them along (and urge you to watch it on iPlayer). It's not quite a rock show, it's somethingmore all-encompassing than that. It's bigger than emo. It's not punk-pop. It's a pop show (but Pop with a dash of reverb and a zing in its tail!) but not as you know it. And it's only "pop" because not a single melody is anything but killer.

As a super-professional and yet still endearing arena band, as a giving-it-everything festival headline band, as a new-sort-of-pop band, as heroes of young girls (and young boys) (and older folks too), as a GreenDay for 2014, as Nirvana to Katy Perry's Hanson.... this is as good as it gets.

Related: A full review of the Reading & Leeds 2014 weekend can be found here._

p.s. Such was the force on display tonight that not even the much discussed PA outage could faze the band. They've even rolled with the punches and spun that - like much of their career and lyrics - into another tale of triumph over adversity:

(This didn't send earlier!) 80,000 ppl singing acapella to the only exception!! To think I was nervous to play a slow song at Reading, ha!!