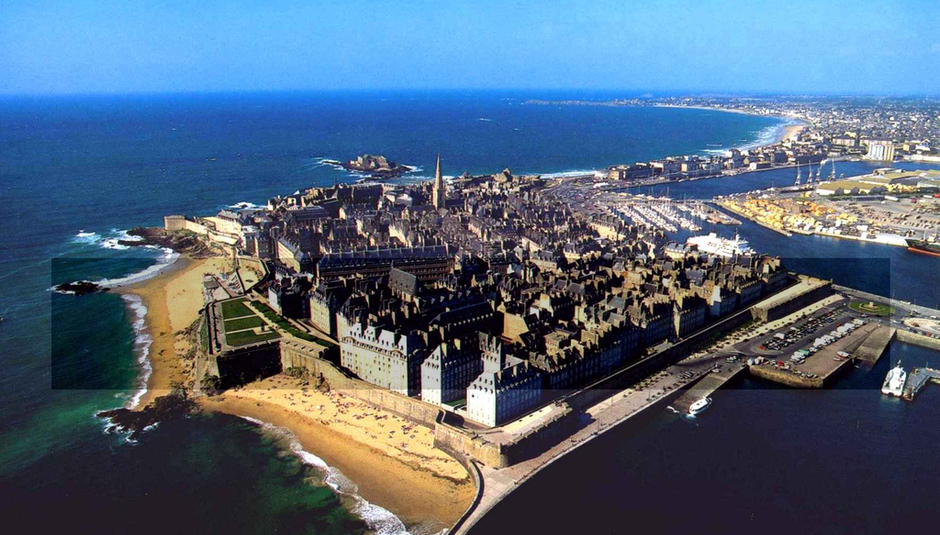 Shoring up in Northern France, your first taste of La Route Du Rock is the salubrious coastal town of Saint-Malo. It’s superior tourist fare. For starters the whole centre’s enclosed by intact city walls. Wandering among the ramparts you find statuettes of male war heroes, foreheads plastered with club flyers, as live simulations of traditional music ascend from street level. Along the fort people in sunhats peer through lenses at balmy beaches and beyond, out to islands that speckle the turquoise sea. On many reside more old forts, shimmering in heatwaves, useless and beautiful. Is this bliss? To our knowledge, it is.

Reality, of course, finds a way to intrude.

On Thursday afternoon it's chucking it down, so we rinse the supermarché for local cider and French cheese and cheap wellies from China before cabbing to site. Already the bar’s set high. Last night at a venue off-site Ought opened the festival with anthemic songs that shake off capitalist dread via promoting post-ironic sincerity. I’m deeply fond of Ought. Endlessly savvy, they channel white guilt into mass-cultural hope. Today, this is how the male indie quartet can impact our culture. The singer is all posture, a showman without shoes who vogues primly between David Byrne, Jarvis Cocker and some fifties film icon. Bogart, maybe, or a young Kirk Douglas.

The silver-screen touchstones seem germane. With their big-budget lineups, global iconography and video screens vast enough to conflate the present and recorded event, it’s possible to observe music festivals as a sort of amped-up, quasi-Baudrillardian Disneyland for the insatiable music consumer. In this sense, La Route Du Rock is très grassroots - minimally corporate and sparsely scheduled across two stages - but the sense of a cartoonish culture persists.

At once authentic and absurd, South London's The Fat White Family seem to have crawled perfectly formed and stinking of fags from a Mike Leigh cinema epic. True to type, the singer swaggers onstage frantically adjusting his testicles. True to type, their fans go nuts yelling ‘twats!’ in French accents. It’s a well-executed show. During ‘Touch the Leather’ chaos reigns. Suddenly, as chanting intensifies, the pit jolts and ejects me to its fringes. In a moment of imbalance I’m spun round and licked up the face by a Frenchman. Aghast, I whip back and quizzically scan my assailant. Through a mean goatee he grins furtively, like Zidane after a cheeky dive. Still smiling, he shoves me hard back into the melee. Regardless, everybody leaves feeling blessed.

Next day, a short walk from the hotel we find Cancalle, French oyster capital. On the way we pass circus elephants being delivered to the local fair in a lorry branded ‘JOY,’ which is strewn with shit and hay. Down a scenic hill we approach the clam farm, where oysters grow underground on strange metallic trees. Naturally its fruits are divine, served fresh with lemon by female shouters from overflowing stalls. Peak BritWatch happens when the good lads from Crack magazine sack off the market for sea-bistro restaurant Chez Victor and reportedly order “champagne and chips,” the breadth and essence of our culture.

That night Portishead headline the main stage. Bundled up in a rain mac, Beth Gibbons looks pained. She looks like Joan of Arc at the stake, or Falconetti’s portrayal of same. As ‘Glory Box’ spins its web alongside big-screen images of war and cartoon horror, the camera cuts to a close-up of Geoff Barrow’s Converse, pedal-pushing. The set ghosts along elegantly, shrouded in the band’s intricate overtones and Barrow’s burbled guitar groans, which resemble dying Moomins. They close with ‘We Carry On’ and everyone applauds their awesome gift for delivering darkly mystical folk via wistful librarian metal.

Across site at stage two the inimitable Metz are aces. Again, volume and velocity conspire triumphantly. Again, the crowd is tremendous. “What a trip, what a trip,” reels the singer, pretending to be from the past. Liars escalate the ruckus. Over mutant heartbeats, Angus Andrew dances like his music makes you feel - dark, puny, alien, sexy. Shortly after the set the screens pan out and reveal a giant conga line traipsing the pasture. Field research reveals that a) said conga was actually preplanned via Facebook, which is either slightly sad or deeply inspired, depending on your proclivity for conga, and b) this writer’s proclivity for conga is very much alive and kicking.

Final night’s a messier beast. Backstage somebody’s pioneered a two-parts-to-one cocktail of Coca-Cola and rosé. With a carafe of CocaRosé in hand we jiggle merrily to the whelming cross-currents of Jamie xx and Norway’s Todd Terje, sadly without band, whose festival-closing ‘Inspector Norse’ is nonetheless the best thing since sliced bread. The day’s rock highlight were Perfect Pussy. Singer Meredith Graves is a whirlwind of shrieks and high kicks. Her vocals are violently drowned, indistinct, but what matters is that you want to understand. There’s a tormented glee in Graves’ gaze that suggests whatever’s being shared between her and the microphone is so darkly revelatory we scarcely deserve to hear it.

Such knotty thoughts race as punks in novelty shades and Hawaiian shorts crowdsurf around us. You come to appreciate those small authentic moments. During Mac DeMarco’s afternoon set, far away from the video screen’s tyranny, there sailed overhead a beautiful hot air balloon full of holidaymakers. The crowd waved en masse - it’s important that we do - and the kids waved back, pointing their iPhones and snapping special pictures.