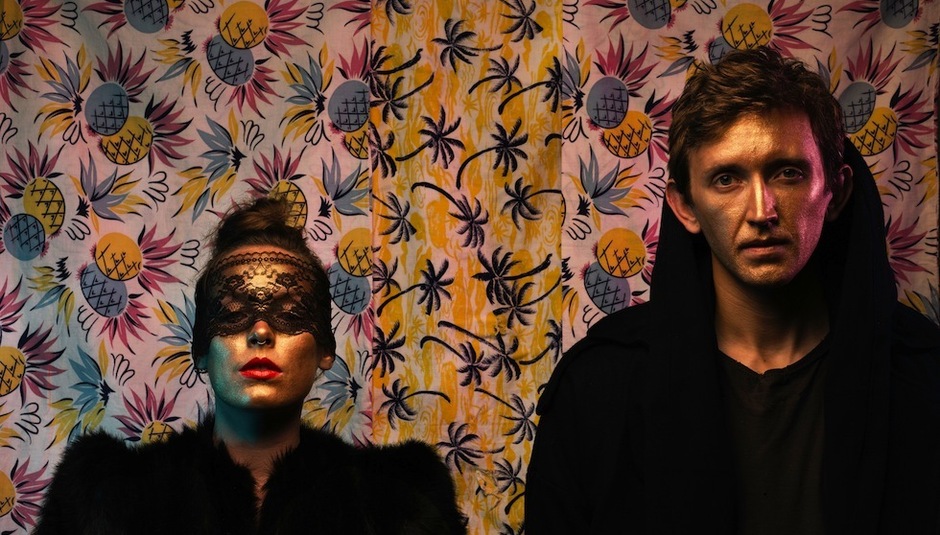 "Sylvan Esso was not meant to be band." You’ve got to hand it to the PR, it’s a great pitch: accidental electronic-pop duo emerge – seemingly out of nowhere – brandishing one of the most intriguing debuts of 2014. It’s a story that front woman Amelia Meath corroborates when we speak over the phone. But what also emerges out of that tangled narrative of serendipitous circumstances and moments seized, is a portrait of a determined individual, driven by a love of music and a desire to create.

Firstly, if Meath looks familiar to you it’s likely because she accounts for one third of a capella folk outfit Mountain Man, alongside Molly Sarle and Alexandra Sauser-Monnig . The three met whilst studying at Bennington College, Vermont, and their debut album, Made The Harbor, was released by Bella Union in 2010 to glowing reviews. According to Meath, Mountain Man was not meant to be a band either.

“Music as a job really crept up on us,” she explains, in her leisurely drawl. “It was never our intention. We were just in college and put some songs on the internet and the internet liked them.” A cynic might question why she bothered uploading tracks at all, were she not seeking some kind of recognition, but this behaviour actually seems in keeping with her unusually artistic upbringing, where musical performance was integrated into the daily routine.

Meath has fond memories of family dinner times in Cambridge, Massachusetts, where everyone took turns around the table to write and recite Haikus or sing. Her formative musical tastes were shaped by car journeys with her radio-singer father, the two of them singing along together to songs by Foreigner, The Beatles and The Who (“‘Beyond Blue Eyes’ used to make me weep; dad had to warn me to play it.”) Left to her own devices, Meath moved from listening to Lauryn Hill and Eminem to Blink 182 – whom she still has a “violent soft spot for” – before getting into “wilder stuff.”

“When you're figuring out music at first, you get really obsessed with a genre, like, 'I only listen to pop-punk',” she laughs. “It’s after you get over that, that there are all sorts of possibilities open to you. I gave myself permission to like The Velvet Underground and The Beatles, then started exploring Laurie Anderson, Nina Hagen, Le Tigre, the whole Riot Grrrl thing...” Discovering that Meath has always had broad musical interests makes her transition from Appalachian-inspired folk to future-pop suddenly seem less extreme. And yet one was integral to the other, because without Mountain Man she would never have encountered her current musical partner, Nick Sanborn.

The pair first met at The Cactus Club in Milwaukee, back in 2010, when they were both booked as unlikely opening acts for Twin Sister: Meath with Mountain Man and Sanborn with his hip-hop solo project, Made Of Oak. Impressed with his act, Meath invited Sanborn to remix their song ‘Play It Right’, and was so excited by the results she moved from Brooklyn to his base in Durham, North Carolina, specifically to collaborate further. It was a gamble that paid off.

Their self-titled debut took a year to put together – a period that Meath funded by singing back-up for Feist – and was recorded in Nick’s bedroom, a white space “filled with electronics” plus a “little teeny closet” which doubled as Meath’s vocal booth. “It was great!” she chuckles, when I involuntarily utter a claustrophobic squeak. “I’m short enough that I can fit under the rail and, when you shove the coats to the side, it’s really cosy.” If you listen carefully at the end of ‘Coffee’, you can hear its door creaking open as Meath hops out.

With the exception of pared-back album-closer ‘Come Down’ – which sets Meath’s multi-tracked harmonies swooning over barely audible guitar and the ambient buzz of electronics – Sylvan Esso inhabits an entirely different sonic realm to Made The Harbor. While Mountain Man’s aesthetic was simply three voices gelling with minimal instrumental adornment, Sylvan Esso’s focus is exploring and exploiting the contrasts between synthetic and organic sounds, with Sanborn’s skittish hip hop beats, shuddering subs and twitching electronics making an unexpectedly effective foil for Meath’s lilting vocal. Tempos and moods vary significantly from track to track, but it’s a record that bristles with kinetic energy throughout. And while Meath rejects the theory that her compositions in Sylvan Esso are in some way a reaction against her previous work with Mountain Man, she will concede that she “missed having people dance, and dancing myself.”

“[In Mountain Man] honesty was very important to us,” she explains, “And we interpreted that as just standing and singing. Our philosophy in Sylvan Esso is, “Just feel how you're feeling, and don't be embarrassed by looking like a dork.” So, it's actually quite a similar message of honesty, but discussed in different ways.”

It must be freeing, though, to be released from the rules and restrictions of folk music? Again, she disagrees, on anything but a thematic level.

“With pop music there are actually very specific confines, if you define a pop song as something that goes by the regular verse-chorus-verse-chorus-bridge-chorus structure. What is wildly different, are the boundaries of what’s ok and what’s not ok to discuss. Most folk songs centre around nature, animals and beauty – and you can do that with pop music, but the imagery is so much more to the point. Also, with pop songs you can write about getting wasted. Or fucking.”

Or being objectified, as she does on the intriguing album-opener ‘Hey Mami’. Drawing on her time living directly above a bodega in Brooklyn, hearing the men below “cat-call babes all day” and receiving the same treatment from them herself, it’s sung from their perspective, and built around the repeated chant, “Hey Mami, I know what you want, Mami.” It was written out of exasperation, though not for the reasons you might expect.

“I was frustrated by the fact that sometimes I do like being cat-called,” she sighs. “I mean, sometimes it makes me feel very unsafe and sometimes it makes me want to hit people but, at the same time, sometimes it’s super-sexy. And that makes me mad, because it’s embarrassing. Also, a lot of the time when people talk about cat-calling, they’re taking it as if they’re being demeaned; like, the man’s taking away the woman’s power, or stripping her of all of this magic, simply by saying she looks good, which is just complete lies! He’s just making an observation. And I don’t understand why we give the cat-caller that power.” We agree that while context can define whether unsolicited compliments feel invasive or not, there’s no grey area when it comes to sexist abuse.

Meath was amongst the many thousands who read Chvrches singer Lauren Mayberry’s essay on online misogyny, and was moved to share it on Mountain Man’s Facebook page, with the comment, “Fuck yes! So excited about all this active speaking out recently!” I’m intrigued to know if she identified with any of the scenarios Mayberry recounted.

“Oh yeah, they’re totally real,” she responds straight off the bat, adding quickly, “Though obviously I don’t get the amount of attention that she does.” Probed further on the topic, she describes some of the comments as “terrifying” and the perpetrators as “cowardly”, but also draws a distinction between “the general shitty misogyny on the internet”, and the abuse specifically targeted at professional performers.

“There’s this point with fandom, when people decide you’re a fantasy object for them, and you’re no longer human. It’s a very different experience for women and men, but usually with women it means that people think they can fucking touch you, whenever they want to,” she shudders. In Meath’s experience, sexism isn’t confined to live shows, either.

“People feel more comfortable talking to Nick about business-y stuff, which is fucking infuriating. But also, Nick is much better with numbers than I am, so there’s this constant push-pull... Sometimes it’s about recognising my own strengths and, saying “Maybe they are talking to Nick because he’s the man, but that’s ok because [in this instance] Nick understands what they’re saying better.”

“I think the main thing about misogyny,” she explodes, “Is when there’s a woman talking in a creative project, and she makes a point of being quite loud and voicing her opinion. People often look at them, like, “Wow, you’re being super forceful.” When, in reality, it’s just because people don’t fucking ask you your opinion that often.”

“I’ve experienced misogyny pretty much everywhere,” she concludes wearily, before adding, “And also I am a misogynist.” She is? “Well, yeah! You’re constantly fighting with yourself not use the societal rules that you’ve learned, right? Sometimes you’ll find yourself being a fucking asshole, holding up women – or men – to different standards because of their gender. It’s about recognising the really subtle differences, and figuring out how to name those, and jump over them.”

It is a constant battle, but one that becomes incrementally less daunting the more that people speak out about it. And like Mayberry, Alana McCardle and all the other talented musicians who’ve recently highlighted prejudice, you get the sense that it will take a lot more than bigoted behaviour to deter Meath from pursuing her dream.

“The goal for Sylvan Esso is really a life goal: to make not just one, but many records that people like, to build a following and be able to buy a house and live well, in a creative and positive environment. This is exactly what I've always wanted to do and, right now, I’m as happy as I could ever be,” she smiles, adding cheerfully, “As happy as a bird with a french fry.”

Sylvan Esso is out now via Partisan Records. 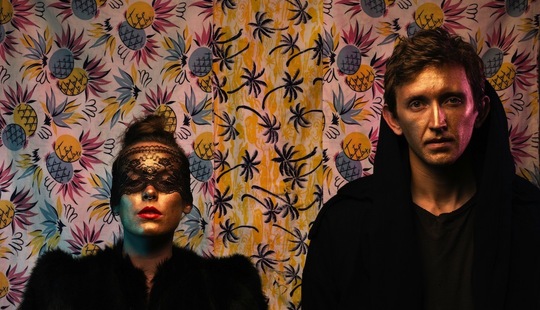