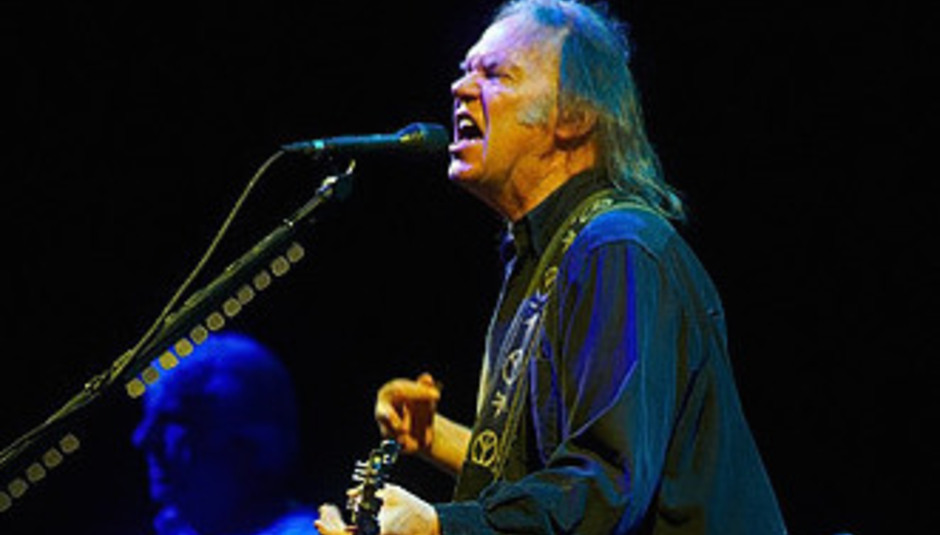 The last time I saw Neil Young, I had the temerity to greet his generous, hits-heavy Glastonbury 2009 headline set with a sort douchey unease: I suppose for whatever reason it struck me as a bit sell-outy of history's most famously single-minded musician to play a lovely, Harvest-heavy set when he could have lived up to his own legend and gone all guns with his current album, Fork in the Road, a poorly-received concept record about electric cars (which I actually quite liked).

It’s probably safe to say that Saturday’s British Summertime Hyde Park show entirely lived up to the Young legend, due to the presence of on-off collaborators Crazy Horse. Whatever impulse Young may feel to please an audience, I think it’s fair to say that his urge to amuse Ralph Molina and Frank 'Poncho' Sampedro rather overrides it.

Having loved 2012's dementedly monomaniacal Young autobiography Waging Heavy Peace, I was in fact probably even more in the mood for him to do something ridiculous than I was five years ago; I’m not sure the rest of Hyde Park agreed, but I enjoyed the set, despite the inescapable preponderance of 25-minute jammed-out versions of Ragged Glory album tracks.

Crazy Horse’s unapologetic lack of virtuosity is part of their legend: all they really do to get these songs to double, triple, quadruple their recorded length is find a simplistic groove and lock into it, with adornment provided by their more gifted leader and a trio of soul singer backing vocalists. It’s equal parts maddening and magnificent. There are times when Young’s musicianship is palpably so much greater than that of his cohorts that you feel he might as well have just brought some random old timers from the nearest rock pub to play with him. But the energy and camaraderie pouring back and forth between these geezers really is something, an alchemy that transcends technical agility, as does the sheer audacity of stretching these songs out for so long - during ‘Love to Burn’ I spent the entirety of the lengthy into trying to remember what song it was, concluded this might be a decent moment to get a drink, slowly made my way to the bar, bought a round, queued for a fishdog, decided I probably didn't really want a fishdog, bumped into a friend from work, chatting to her a bit, then slowly made my way back through the crowd, and there was still LOADS of ‘Love to Burn’ left. It was sort of neat.

Perhaps the most perverse moment in the gig is a straight-down-the-line acoustic interlude, in which Young bashes out spirited takes on ‘Only Love Can Break Your Heart’, ‘Blowin’ in the Wind’ (performed to Dylan’s original arrangement, not Young’s savage Weld take) and ‘Heart of Gold’, to tremendous audience enthusiasm. He does this largely unaccompanied, Crazy Horse content to potter off and let their leader give the crowd what it wants, on the understanding that will refuse to play any part in it. The band return for a storming take on Zuma’s ‘Barstool Blues’, an enthusiastic ramble through the title track of last year’s Psychedelic Pill, a slightly underpowered ‘Cinnamon Girl’, and a genuinely phenomenal ‘Rockin’ in the Free World’ - unsubtle as they may be, the pertinence of the lyrics vis a vis Austerity Britain is pretty painfuil.

Somehow the magic evaporates a little in the encores, partly because their entire first encore is a lengthy (natch) new song, partly because you can sense Young is a little peeved that the audience isn’t a little more into it, partly because Crazy Horse are simply an erratic band. Young repeatedly states in Waging Heavy Peace that it's important you ‘don’t spook the Horse’ - I think maybe a little of that crept in here (though looking at other setlists from this tour, I don’t think suggestions that the finish ten minutes before curfew meant hits were withheld - if we missed anything it was probably just ten more minutes of jamming on the concluding ‘Down by the River’).

In any case, it was what it was - an unfiltered first hand look at one of the most potent and eccentric musical partnerships of the twentieth century. I can see why that might have been some people’s idea of a horrible time. But I’m glad to have caught the mad old bastards in full flow. And it was inarguably infinity times more fun than a modern day Bob Dylan gig.

NB: It was notionally a one day festival, though the only other act I caught were The National who put in a low-key, hit heavy set that didn’t scale the heights of previous times I’ve seen them (when, er, Matt was drunker, basically) but was, nonetheless, very agreeable. The sound seemed fine; the presence of a large, penned-off VIP area immediately in front of the stage seemed counter-productive; the large model trees onstage seemed needlessly twee; it generally seems a sight improvement on the ‘old’ system. So there you go.