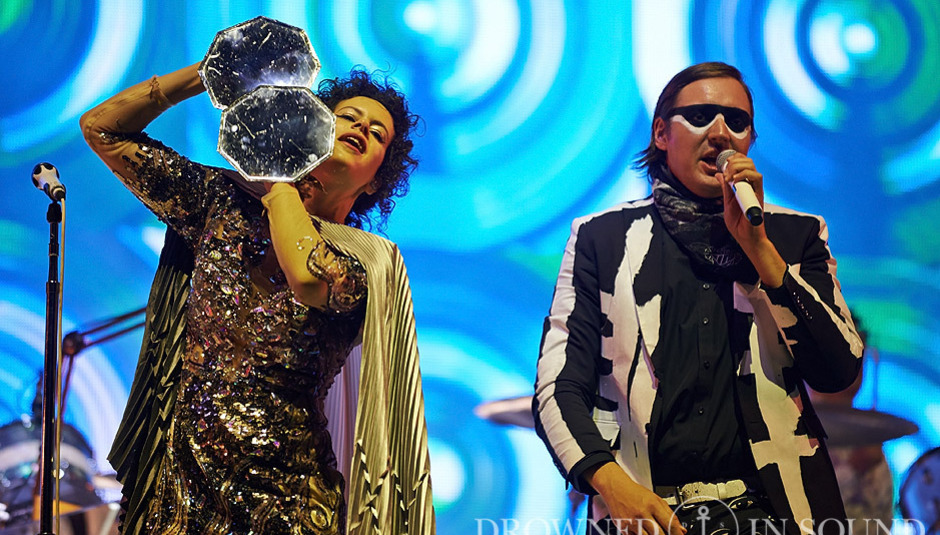 Of all the heavyweight acts hoping to prove they’re still contenders at these British Summer Time gigs in Hyde Park - Black Sabbath, The Libertines, the often wilfully obdurate Neil Young and, err, McBusted - a year ago few would have pegged one of the biggest bands in the world as needing redemption. But then Arcade Fire released Reflektor. Their first real misstep, oblique and hamstrung by its unwieldy ambition, it was insular and dark, sometimes so much that a populist band slid into misanthropy.

Everyone deserves a second chance, but the difference is that Arcade Fire have comprehensively set about creating and taking their own, as so ably demonstrated during a triumphant, indefatigable Hyde Park set. Future Islands and Wild Beasts both also put in admirable early efforts - the full spectrum of the esoteric male vocalist covered via propulsive, muscular synthpop - before the execrable, bafflingly popular Jake Bugg plodded along to undo all promise.

Then, shambling on as the day’s ferocious heat begins to subside, come alter egos The Reflektors. "For perhaps the last time, we’re Arcade Fire” they announce before stuttering into a pedestrian ‘Rebellion (Lies)’. It all lasts that little bit too long. Wearily understanding chuckles expire. Glances are exchanged. Suddenly, Win Butler et al stride on, gently clear the stage and a propulsive, instantly celebratory ‘Normal Person’ has them haring out of the traps. A huge bank of reflective hexagons descends from the rafters. We’re off.

The brinksmanship tested patience, but questioning the joke’s veracity recalibrated the audience. Tables turned; arms-folded demand – ratcheted up as many a casual fan found the (suspicious) circulation of a ludicrously cheap £2.50 ticket offer too much to resist - became arms-aloft surrender. With it came the opportunity to silence all doubt and convert even the mildly interested. It wasn’t passed up.

Arcade Fire’s spectacular live show, the band swelled to a drilled, eager 12-piece, works wonders in forging understanding of Reflektor rather than hard-headly trying to prove people wrong. It’s the best possible critical riposte. ‘Joan of Arc’ is revealed to have a strident glam stomp. ‘Here Comes the Night Time’ unleashes the full power of its glittery dub that escaped the record. Now essential, its joys are (forgive me) reflekted in the show’s crowd pleasing elements - the confetti cannons, the face paint, the costumes – and not buttressed by them. Even ‘Reflektor’ itself, compelling and indomitable, doesn’t lose its ironic examination of technology as Butler is filmed by Spike Jonze (with echoes of Stop Making Sense) before meandering to crowd to face the de rigueur sea of smartphones and selfies.

Whilst Reflektor can never be recast as a great record, its highlights are now very much part of Arcade Fire’s canon, its problems revealed as exuberance that branched into overindulgence. That we can forgive. Live, of course, it's anything but a shortcoming. Set judiciously in an epic, career-spanning set, the album’s wounds are cauterized. Sometimes, you end up loving something more for its flaws.

The rest is largely a rejigged Glasto, a set moored with clusters of familiar songs as reliable anchor points. ‘The Suburbs’ - floating over the dusky park on a gorgeous, pared-down middle third - ‘Ready To Start’ and ‘Neighborhood #1 (Tunnels)’ nestle together gloriously midway. Particularly welcome was a majestic ‘Intervention’ (Win calls, “time for church”), fitting as the faith of some has never wavered. Without it, Arcade Fire wouldn’t have two recent Earls Court dates under their belts along with the Worthy Farm headline. And, even though it’s a decade old, the slosh and sway of Funeral’s Bastille-barricade-bothering that was co-opted (and diluted) by Coldplay is still in full force as the set’s reliable crescendo.

As outré as the newer material may seem, and despite appearances, here’s still a band to celebrate for their shuddering normalcy. Deep down so much of their concern is redressing life’s simple disconnections, albeit ones that are twisted to an apocalyptic level and given perverse celebration. Without it there wouldn’t be the reaching out, the hardy souls on shoulders, the sing alongs, the heady abandon throughout. “It’s easy to fall in love in London on a day like this”, Butler admits. It works both ways.