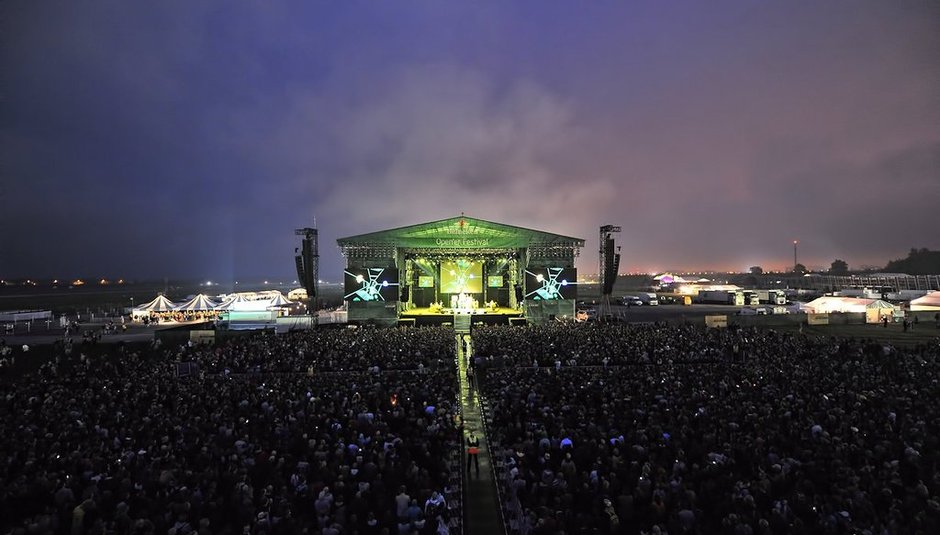 It’s almost midnight and we’re just outside Gdansk, heading to Gdynia for the Open’er Festival. Or, rather, we’re heading down a dark lane in the wrong direction because our driver doesn’t know the way, our translator left us about 10 minutes after picking us up from the airport and the only other person who might have been able to help jumped out of the van when it slowed for a junction.

Indeed, we’re set to spend a lot of time over the weekend sat in vehicles either glancing bemusedly down at Google Maps as the link between where we’ve asked to be taken and the route that we’re taking grows ever more abstract, or else gripping our seats with terror as we plough across railway tracks in industrial zones without looking. Heck, we’re only in the country for 60 hours and we see at least five car accidents, a house burning down and a guy wandering the streets in the suburb where we’re staying wielding a chainsaw. Welcome to Poland, it seems.

Amazingly, somewhere in between we found the time to see some bands. Open’er Festival is one of Europe’s largest, now in its thirteenth year and attracting around 70,000 people to a military airfield for four days of music, art, fashion and Heineken. So, so much Heineken (presumably, as a sponsor, the thinking was that giving us little alternative to their product would help their brand rather than swear us off it for life...). And there’s a lot to be said for a space this big, a sky this massive, the crowds spread out and runway lights glowing sinisterly in the near distance whilst people dance in hangers that look like cutaways of the Teletubbies hill.

We could probably do without the 10 minutes' walk between the main stage and the Tent, mind, across a field pocked with holes to snare the ankles, although the route is at least lined with a weird hay-bale tunnel and a subway train that’s been painted white and drawn over in felt tip. There’s also an art gallery, a cubic structure filled with exhibits from Warsaw’s Museum Of Modern Art (the 30ft bendy penis is far more entertaining than any of Bastille’s set) and a Fashion Stage featuring catwalk shows every few minutes. Oh, and a sizeable stall selling pricey lingerie, clearly a pressing need when you’re in a field for four days.

As for music, well, it is pretty fucking awesome to be walking onto site past fences lined with razor-wire towards a stage that looks like Cape Canaveral just as Foals kick into 'Prelude', the sun burning low in the sky and our lanyards swinging in a Michael Bay slow motion, all journo swagger and effortless cool. Granted, we probably didn’t actually look that cool - I think I fell in a hole - but the filmic setting aptly complements the Oxford quintet’s jagged swells of riff and percussion, the moody slow-burn of Spanish Sahara and the seismic wall of 'Inhaler'. And whilst we’ve grown accustomed to seeing them higher up the bill than this, headlining Latitude and filling huge rooms everywhere, it’s hard not to think that here’s where Foals work best, bathed in magic-hour lighting and starting the night properly.

And then to Royal Blood. Honestly, it’s a long, long time since any artist has been this exciting, this invigorating, and this is a crowd that really knows it: for a band that’s yet to release an album for so many people to already be anticipating every beat, every crushing rhythm or coiled riff, is quite some feat - to be galvanising a circle pit like this one, a genuinely terrifying circle, more gladiatorial chariot race or mythic whirlpool than audience, even more so. Forty minutes of bruising later and everyone around is drenched through, the peals of feedback drowned out by the people just screaming their name.

It’s a worn cliche that European crowds are more into it, but damn if it isn’t true. Case in point: Wild Beasts. Four times I’ve seen them this year, playing to packed-out English venues, and sure, it’s been fun. Singalongs, moderate dancing, all that. But here - here they’re living this music, every word on everyone’s lips and everyone’s body in tune with each beat, each synth. And the band are on form tonight, Tom raising a glass of wine to the crowd (“How do you say 'cheers' in Polish?”) within a set that shivers with emotion, with darkness and sex and urgency and lust.

Next to that Jack White’s nowhere near as interesting, and whilst his headline show gets a lot of love the extent of the audience’s devotion remains a little mystifying. The man can play, certainly, and it’s a set diverse in sounds and style and rich in showmanship, but his songs are just too prone to blurring, attention wandering all too easily until a final, climactic 'Seven Nation Army' focuses everyone right back - not least because the stage lights glare out like Guantanamo strobes.

I’d happily opt for Guantanamo over The Horrors, mind, a band that literally seem to have no purpose, their ersatz-Cure dirge holding even less impact in the evening sun. It’s a set that seems eternal, the open skies and long horizons rendered purgatorial, but words alone don’t quite convey it: much better the notepad of the writer to my left (scribing for a publication that routinely fetes these guys: “We really need to stop...”) which, as they finally, finally left the stage, remained blank but for the band’s name and a single pained dash.

That sense of purgatory is continued by Faith No More, clad in white against a stage lined with flowers, and there’s certainly arguments to be made that they’re a group that maybe shouldn’t exist anymore. But it’s a lot of fun anyway, this tumble down the memory-hole, with Mike Patton on fine form in front of a crowd of scarily dedicated fans. Ditto Daughter, with Elena Tonra moved to tears when she fumbles a song and the crowd picks it up for her, clapping and smiling and dancing their way through every note as if these weren’t some of the most anguished tunes to weep from speaker stacks in recent years.

But Warpaint win it. It’s a surprise, actually, having seen them off-form of late, to be reminded just how tight they can be, how hypnotically engrossing. Sure, they’re late onstage and have to stop opener 'Keep It Healthy' midway through because of careening feedback, but hey - from there on it’s all oh-so-good, a rare airing of early track 'Beetles' anchoring a set that’s confident in its meanderings, in its slow-burn rhythms and creeping shadows and drawn-out, taunting siren song.

And then we’re left to stumble from the tent, those runway lights aglow like retinal burn and the sky already dimpling with the morn as we stumble to our taxi, back across those railway lines towards 40p beers (not Heineken) at our hotel bar. But fair play Open’er - it’s a good show you put on here, and provided we survive the journey we'll be sure to see you again.