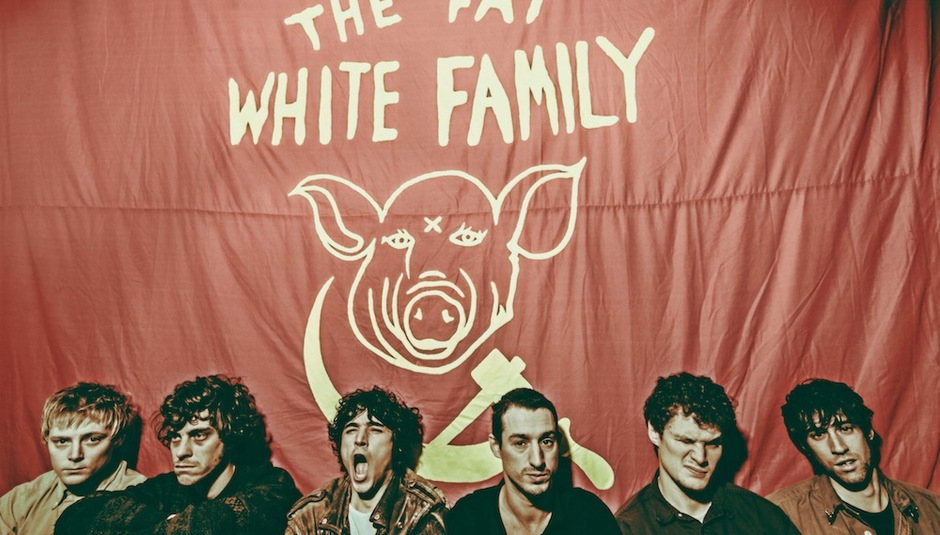 You can subscribe to this playlist here. And the playlist is also available on RDIO here.

Please note: A few tracks have been substituted as there weren't official versions available on YouTube.

'​With The Winds Against Us​'

Sean Adams (Editor): Whilst the likes of Swans have won 'best record of the year' plaudits in earnest and the postrocktronica of Explosions in the Sky and Eluvium's side project Inventions left critics agog, it's been hard to find many hints of the awe that Leave Me... deserves (stream it here). Taking drone to a place where Jim Morrison swims in clouds of smoke, Fritch manages to construct something that's both beautiful and menacing. It's the subtle shadow-play that sets these compositions apart from almost anything else that has been jammed into DiS' inbox this year. Although do go listen to Keaton Henson's new modern classical record and Douglas Dare's Thom Yorkegasms if this stainglasswindow-gaze is your bag.

Andrzej Lukowski (Reviews Edtor): It's bleak but it swirls with poise and authority, a Great American Novel of a song.

'Your Love Is Killing Me'

Joe Goggins: The sheer flexibility that Van Etten demonstrates throughout Are We There is its real triumph; she’s proven beyond doubt that she’s a formidable singer-songwriter in her own right, with much of the collaborative help she benefited from on Tramp stripped away. The clear standout is ‘Your Love Is Killing Me’, a six-minute simultaneous exercise in both drama and restraint; the lyrics are wildly theatrical, but delivered with such conviction - with Van Etten in constant control of her anguish - that you can’t help but be sold on them. The instrumentation, at once lush and unobtrusive, recalls the more polished side of PJ Harvey; you could easily imagine this track serving as the centrepiece on a record like Stories from the City, Stories from the Sea.

Robert Leedham: There are so many reasons to love 'Fancy', but best of all is the fact that no one saw it coming. After 'Pu$$y', 'Work', 'Bounce' and 'Live Your Life', the Aussie rapper with a Southern drawl looked as though she'd go without a super-massive hit - despite being pitched as the next big thing for a seemingly endless amount of time. Of course, Charli XCX had different ideas and she knows a thing or two about international smash singles. THAT chorus was born and the rest is chart history.

Jon Clark: Sadly absent when I saw Eagulls live, this is a spectacularly bleak four minutes.

‘Today More Than Any Other Day’

'So Now You Know'

Dom Gourlay: Having started out as a cartoon Cramps before progressing into MBV-esque sonic textures and beyond, The Horrors latest development finds them reviving the spirit of 80s alt-poppers Ultravox and Simple Minds for a new generation. One minute subversive darkwave, the next insatiable disco. Nothing comes closer than 'So Now You Know' to defining the band's current phase and with it, the finest five minutes of skewered pop this year.

Christopher McBride: For what is essentially the filthiest sounding track of 2014, 'Touch The Leather' is surprisingly clean - no profanity, and nothing that when taken in isolation could be interpreted as sexual. That is unless "touching the leather" refers to something that my naive little mind cannot comprehend (or want to Google). But for my money, it's much more fun to imagine this song being about serial DFS botherers than anything more risque. Dirty, guttural fun.

‘Ride Into The Sun’

J.R. Moores: Bardo Pond pay tribute to Lou Reed’s passing by stretching out The Velvet Underground’s pretty little ditty into a cathartic twenty-minute psych-rock eulogy. The fucked-up noise breakdown in the middle perfectly captures the pain felt by those the dead leave behind.

Gemma Hampson: This is proper fun soul music. It's full of feeling but not too serious. You can sing along at the top of your lungs, dance, swoosh your hair around and not feel like a dick. Kelis has a voice like a clarinet being passed through a bonfire. She's no Aretha, but she has style and ideas. And her band is bloody brilliant. There's no tinny pop synth here - it's retro, real and excellent.

Tristan Bath: At the tail end of an album filled with glossy disco beats, soaring melodies and singer Eno Williams’ dizzying joyous neo-soul delivery of the rarely before sung Ibibo language from south-east Nigeria, comes a near perfect deep, dark, subtle groove in the form of Ibibio Sound Machine’s ‘Prodigal Son’. The legacy of Fela Kuti and Ebo Taylor’s rhythms in a London-based band essentially aiming to modernise much of that West African music was always going to fall on the shoulders of the percussion, and drummer Benji Bouton succeeds with breathtaking brilliance, crafting a light wristed beat that would make Clyde Stubblefield (James Brown’s very own ‘Funky Drummer’) and Tony Allen fall to their knees in awe. Eno is also at her very best too, writhing and spitting with allure across the proceedings, highlighting the innate rhythm of the Ibibio language as she spins the biblical yarn. Immutably likeable, insatiably danceable and utterly addictive, this is the one song from 2014 I could leave on repeat until the next half-year poll and never regret the decision.

'Let Me Down Gently'

Dave Hanratty: All of the promise shown or hinted at or spoken of in 2009 absolutely explodes here. Perfectly structured, loaded with brilliant payoffs, shimmering production flourishes and genuine emotion. People still bang on about 'In For The Kill' but this struts all over it with considerable style. Oh, and there's a saxophone solo.

Tom Fenwick: Hyper infectious titular single from Metronomy's much maligned fourth LP and a song that instantly provokes head-nodding, foot-stamping approval. Its rampant melodies tumbling over Joe Mount's garrulous piano, as sunny '60s influenced sing-a-long hooks blow through the track like a cool costal breeze. If you were ever in any doubt that Mount could still deliver classic pop post-English Riviera then this is the vindication.

James Skinner: I know this song came out last year, but Courtney Barnett is another singer I’ve only got into recently, and ‘Avant Gardener’ - all sludgy bass, dirty guitar and matter-of-fact delivery - encapsulates everything that makes her so likeable. “What exciting things are going to happen today?” she asks near the beginning of the song, perfectly capturing an odd kind of ennui that I imagine many twenty-somethings (and older) might be more than familiar with. An anaphylactic asthma attack, it turns out, and one rendered in exquisite, endearing detail.

Luke Beardsworth: The very best track on my favourite album of the year so far. Sometimes, the best music helps you through the darkest of times and that is true of this song.

Paul Faller: Further evidence, if any was really needed, that Johnny Foreigner do quiet just as well as they do loud. A twinkling double-time post-rock anthem with that all-important core of emotional devastation at its heart - “I might as well be an organ in your body/the damage I do when I do nothing.”

Radhika Takru: Only the greatest outro to ever exist ever.

‘Back In The Tall Grass’

Matt Langham: There are probably undiscovered tribes in the Amazon who have seen Future Islands on Letterman by now, so let’s have a moratorium on talking about it. Yes, their profile was deservedly boosted through Samuel T Herring’s show-stopping David Brent meets Andy Kaufman viral performance, but an unswerving focus on it does a disservice to a band peaking the old-fashioned way through the hard yards of touring and writing. ‘Back In The Tall Grass’ is a sinuous highlight on a fourth album of highlights, its emotional heft underpinning the band’s signature winsome synthpop. Herring sings, yowls and gnarls, homesick and lovelorn - fraternal, romantic and geographic for his native North Carolina - and sweeps away the relevance of Youtube stats.

Matthew Slaughter: The Tweens ‘Be Mean’

Beautiful Noise: The story of shoegaz...