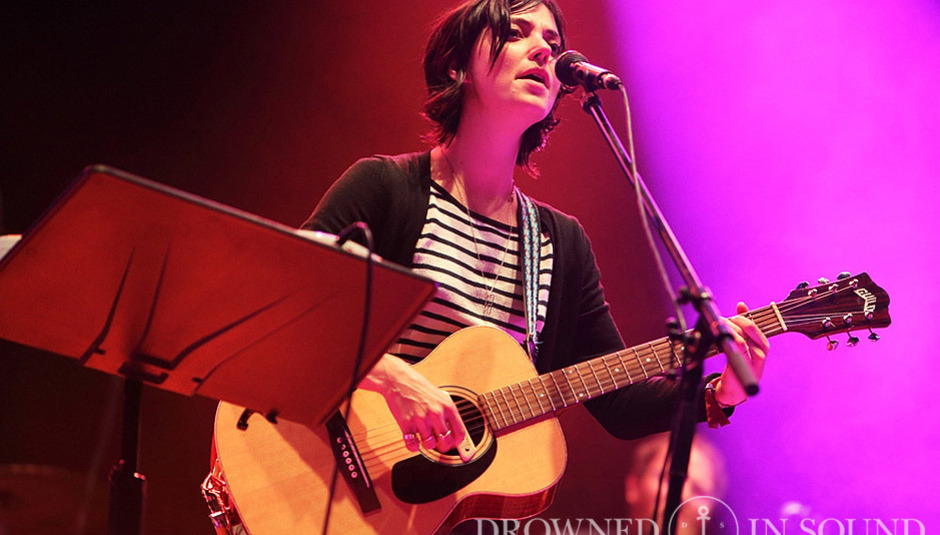 “And she’s funny too!” sighs a rather lovelorn young man behind us, as the tiny figure of Sharon Van Etten cracks a few dry asides while apologising for being a bit under-the-weather. There’s a surprising amount of boys here actually, considering Van Etten makes the kind of sensual, warm, and quite feminine folky pop traditionally associated with a more female-focussed crowd, or at least an equally mixed one. Koko tonight, though, is a bit of a sausage fest. It’s weird. She is, of course, delightful and maybe that ‘sensual’ aspect can blur into ‘sexy’, but you’d think an audience attuned to such a witty, rich songwriter would be a little less shallow than that. Someone wolf whistles. Maybe not.

But that’s the future. First Lyla Foy, the artist formerly known as WALL whose lovely, ethereal voice is matched by her onstage charm. Alas though, charm can only get you so far and while no-one can accuse her of having anything like a bad gig, she never really wins the room over . Songs taken from her rather lovely Mirrors The Sky debut don’t quite do justice to their recorded versions- on record you sink between beautiful sonic layers, rendered live here they feel a little thinner, and much more ordinary. A well chosen cover of Dylan’s ‘Just Like Woman’ and the excellent ‘Feather Tongue’ both pull the audience closer in, but Foy’s smiley, genuinely-thrilled-to-be-here stage persona does as much work as her songs, which probably isn’t the way she’d prefer it.

To say Sharon Van Etten is a DiS favourite would be something of an understatement. Her last two records, 2012’s Tramp and this years Are We There, were both awarded 9/10 scores, with the former declared our album of the year a couple of winters back. It’s with good reason- Van Etten is a delight. She may begin her set with an apology for a failing voice and a touch of flu, but there’s no evidence of them across the next hour of faultless, beautifully accomplished performance.

The venue suits her too- It’s easy to forget among the myriad flashy hipster events held here that Camden’s Koko is something of a grand old dame, a four-tiered auditorium that saw service as the Camden Palace Theatre for over a century. It scrubs up well, but there’s always something of the faded glamour if you look for it, a sadness hidden under the retouched gilt and glitterballs, and that suits Sharon Van Etten down to the ground. Her songs are just that- sometimes grand but always with a hint of sadness, regret, occasionally bitterness. She gilds the rubble of her life so it sparkles, but the threadbare heart beneath will always show through. It’s why her songs are so good. Tonight’s focus is largely on material from Are We There, and it’s delivered with no small confidence, opening as the album does with ‘Afraid Of Nothing,’ with its slow build from shimmery sadness to a thicker, alt-country crescendo, and as on the album followed directly with the cute, almost Cureish melancholy bop of ‘Taking Chances’. Predictably the Tramp material is received best, ‘Give Out’ building from it’s delicate strums to a surprisingly intense finale, ‘Serpents’ is almost casually tossed in mid-set, a song most acts would probably close with, it’s waspish and fierce enough here to be anyone’s finale. Instead Van Etten is happier to give over the key moments of the gig -the top and tail of the show and the whole encore- to newer material. It steps up to the plate too, ‘Everytime The Sun Comes Up’ closes the main set with a pomp and grandeur you might not have spotted in it first time around, while the show closes with a stunning solo run through ‘I Know’. This is an artist at the peak of her powers, captivating this grand old dame of a theatre and holding it in the palm of her hand. Everyone here, man or woman, goes away a little bit in love.

Photo by Burak Cingi via In Photos: Primavera 2014.