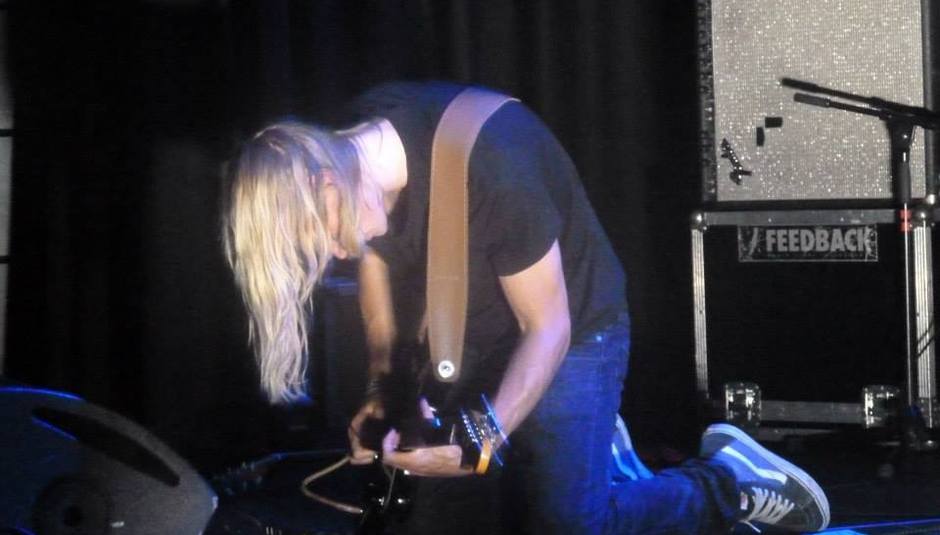 Eindhoven is the heart of the Netherlands' industrial revolution and renowned as being its hub of technological creativity. Electrical giants Philips were founded there nearly 125 years ago, initially as a tiny lightbulb factory. Multinational haulage company DAF Trucks also has its roots in the city having begun as a division of Pacific Car and Foundry Company back in 1928. It also boasts a highly acclaimed university specialising in science and technology while the Van Abbemuseum lists works by the likes of Picasso and Kandinsky amongst its exclusive and highly recommended collection. Picturesque and quaint - in many ways its streets are reminiscent of York's Shambles - Eindhoven's laid-back mentality is several million miles away from the hustle and bustle of London. Add the fact it's only 40 minutes by plane - yes, FORTY minutes - and it's also easier to reach than England's capital city from most corners of the UK.

With the psych rock scene having enjoyed a major resurgence over the past couple of years, the team behind Liverpool's International Festival of Psychedelia joined forces with the city's Effenaar venue - itself steeped in history having recently celebrated its fortieth anniversary - to put together Eindhoven Psych Lab. Spread across two days over the first weekend in June, its inaugural event hosts an impressive line-up featuring over 40 bands and DJs from around the globe. The majority of Eindhoven Psych Lab's shows take place in two rooms - the 400 capacity Observatory and larger, gymnasium style Main Lab which houses 1,300 people. The latter also boasts an assembly point where sound engineers busily put together recordings of all the artists playing this weekend to be sold over the course of the festival's two days. Outside in the grounds of the Effenaar cafe bar lies a pop-up cinema, art exhibitions and an impromptu visit from psych royalty in the shape of Dead Skeletons frontman Jón Sæmundur aka Nonni Dead, his paintings as recognisable as his music.

Moving swiftly onto the music itself, Weird Owl's blissful synth pop is among the most far removed of what constitutes your stereotypical 2k14 psych rock template. As an introduction to the weekend's proceedings, it serves a purpose and while not the most exciting band visually, their pleasant sun-drenched tunes are a fitting accompaniment to the scorching mid-afternoon rays outdoors.

We're also taken aback by Great Ytene's heady concoction of elegantly crafted lo-fi. Having emerged last year from the ashes of various other bands including Help She Can't Swim and Colours, they've steadily found their feet under their current guise and with songs like 'Unknowing' and ' Hunter' off the band's self-titled debut EP (released on Bella Union earlier this year), are definitely ones to watch in the future. Californian four-piece Cosmonauts also manage to conjure up an unholy racket of their own in the Main Lab, not least in the shape of a sprawling take on The Velvet Underground's 'Run Run Run' which closes the set in a most chaotically noisy fashion.

It's East London-based trio The Oscillation that really raise the bar though. Having formed seven years ago, it's only recently that their expansive collision of melody and sonic nihilism has made people sit up and take notice. Nevertheless, they're a revelation here, vocalist/guitar player Demian Castellanos a particularly inimitable presence out front.

Having briefly checked out Lay Llamas' heavily orchestrated stoner rock, it's left to the iconic musings of Sonic Boom aka Pete Kember and Spectrum to initiate Eindhoven Psych Lab's first moshpit. With fellow former Spacemen 3 bass player Will B Carruthers also in the current line-up, their set unsurprisingly delves into the finer recesses of Kember's back catalogue. The closing triplet of 'Revolution' bookended by a cover of Mudhoney's 'When Tomorrow Hits' and 20-minute-long instrumental jam 'Suicide', dedicated to Alan Vega and Martin Rev prove both heartwarming and timeless.

Fresh from their recent stopover in the UK, Wooden Shjips also play a career spanning set that makes us yearn for a new album before too long. Which is something Hookworms are currently in the process of completing. Opting to play three new songs this evening, they're a masterclass in what the true meaning of psychedelic rock stands for. Templates are thrown out the window from the outset, frontman MJ the focal point from the minute opener 'Away/Towards' kicks the set into life. Of the as-yet untitled numbers they play, each hints at a more direct, heavier approach than last year's Pearl Mystic. The second of the bunch in particular (provisionally named '2' we're later told as it's likely to be the second song on the new record) making hairs stand on end and goosebumps rise to the fore. Imagine a Sub Pop Hawkwind or Loop fronted by Ian Mackaye and you're on the right track. Impeccable as ever, but then I guess anything less would be an even bigger shock to the system.

The next day, having drunk our bodyweight in draught Leffe the previous evening, a fully refreshed DiS arrives via a trip to PSV Eindhoven's Philips Stadion to find the Observatory stage already running behind schedule. However, Danish five-piece The Woken Trees (main photo) prove more than worth the wait. Their set, mainly comprised of material from last year's Nnon long player fuses elements of drone with powerful riffs that reach an incendiary climax on the menacing 'Orders' and pulsating 'Yells'.

Chicago's Disappears seem slightly out of place by comparison, their admittedly proficient bluesy take on new wave punk diverse yet misleading. Glaswegian behemoths The Cosmic Dead bring the noise to Eindhoven Psych Lab and then some. Knocking out Sabbath-like riffs aplenty over rhythms originating from Dusseldorf in the early 1970s sounds like a recipe for Satan himself, which all comes to a head during a thrilling climax where guitars find themselves tangled among stage curtains and ears become shredded accordingly.

We're also pretty excited to see Pink Mountaintops, the Canadian supergroup of sorts led by Black Mountain's Stephen McBean. Tight musically and with an armoury of countrified scuzz rock in their locker, they're probably the most structured act in terms of definition and focus we encounter all weekend. Unfortunately, what they display in musicality is weakened by a lack of stage presence, which seems to rely on functionality rather than engagement.

Thankfully, the same accusation cannot be applied to Manchester four-piece The Underground Youth. Having watched them reign supreme at their native city's Cosmosis all-dayer in March, they're in similar show stopping form here. As their name would suggest, combining the mesmeric rhythms of The Velvet Underground - standing drummer Olya Dyer's driving beats make her the new psych generation's Mo Tucker - with rippling feedback associated with Bad Moon Rising era Sonic Youth and a dash of the Mary Chain thrown in as well, they're a captivating force best summed up by 'Morning Sun''s elegant West Coast flavoured groove and the sadistic darkwave of 'Rodion'. Incredibly they've made five albums yet remain virtually unknown outside of their native city. One would expect that to change imminently based on their flawless performance this evening.

With the first edition of Eindhoven Psych Lab about to reach a finale, it's left to Italian collective Sonic Jesus to provide a fitting end for a tired and weary DiS. Hailing from the Doganella di Ninfa region of Cisterna in Lazio, they're another highlight of a hugely impressive weekend that's topped off by the aforementioned Nonni Dead joining them for a euphoric run through his band's 'Dead Mantra' at the show's climax.

By the time Night Beats take to the stage to wrap the weekend up, we're dead on our feet and in serious need of sleep so head off into the night, bags under our eyes and blisters on our feet. Nevertheless, with so many great performances spread across both days coupled with faultless sound quality on either stage and one of the friendliest, all-inclusive atmospheres we've ever encountered at an event of this nature, it would be fair to say DiS is already looking forward to Eindhoven Psych Lab's second edition.

Here's to next year!