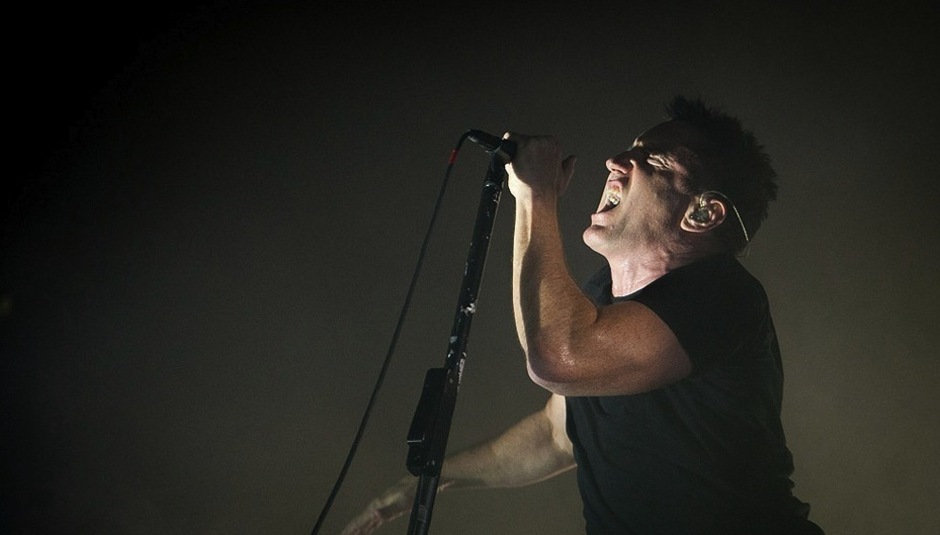 Trent Reznor does not mess about.

Since 1989, he's been ploughing his particular brand of razor sharp emotive electronic rock with gusto, and here tonight, it's evident he's not lost any of that passion or energy over the past 25 years.

It's an interesting mix of people here tonight in Manchester - half older goths, half younger nerds, all bearing iconic NIN t-shirts from tours past. It makes for a beautifully communal atmosphere though, and one bereft of the chest beating tribalism that makes some bigger gigs like this a little tiresome.

The Phones4U arena (it'll always be the M.E.N. Arena to me, sorry Phones4U) is a suitably epic venue for tonight's festivities too, and as Trent and his band walk onstage, the whole place erupts with anticipation.

Opener 'Me, I'm Not' literally shakes the floor with its brooding, sub heavy atmospherics, all throbbing bass and swirling reverbs cascading around the cavernous arena space. It's a brilliantly pitch black way to ease in with the proceedings tonight, and one that works beautifully with the incredible light show and visuals that echo the intensity onstage. If you've ever seen any live footage of Nine Inch Nails' light show, let me tell you it's about a billion times better in the flesh.

Anyway, the applause dies away, just as the arpeggiated synths to 'Copy Of A' slowly creep in. The lights begin to change, and flashing beams of bright white light tumble everywhere, whilst the hyperactive kick drums wallop you clear in the face. As I said, Trent really does not mess about. Armed only with a few dancing synth lines, he still manages to sound like he's ripping your heart out whilst watching it beat in time with the booming 808 drum - something not a lot of people manage to pull off.

The set tonight is seemingly split in two different camps - the electronica stuff, and the rock stuff. Of course neither category is especially defined, and the two mingle all night, but on songs like 'Closer', 'Find My Way', 'Disappointed' and 'The Great Destroyer' (which culminates in a breathtaking barrage of glitched up brutalism), drummer Ilan Rubin downs sticks and joins the others in front of the giant visual screen which keeps ascending and descending throughout the evening, for an extended jam on various synths and guitars which are liberally handed out by the army of roadies constantly on standby.

On the heavier side of things, the band strays into the murkier elements of the back catalogue - material drawn from The Slip and Year Zero are all exercises in lo-fi precision, nasty distortion and rampant energy, the songs from Broken and The Downward Spiral sound absolutely furious, with Trent resembling a man ready to rip your head off as the band blast through 'Wish' and 'March of the Pigs', and the smattering of other songs sound equally as beefed up too - 'Sanctified' is given a new lease of life after the 80s production is stripped from its bones and re-modelled with fizzing synths and meaty kicks, and last song of the night, Head Like A Hole, sounds humongous as its sonics are given a fresh overhaul as well.

Although everyone on stage tonight is playing out of their skin, aforementioned drummer Ilan Rubin deserves a special nod for being absolutely monstrous on the kit - from the broken drum solo on Piggy, to the blast beats on Letting You, he's on fire all night. He even finds the time to provide the bassline on 'Sanctified', although perhaps a little less distinctive than the previous touring (fretless) bass player, Pino Palladino, played it, it's still powerful nonetheless.

And so the lights dim, save for a giant 'NIN' logo burning a hole into the void, we enter the encore. The band re-emerges to play a spectacularly grimy rendition of 'The Day The World Went Away', with all four members playing slow motion guitar in front of a blood red screen, prompting the realisation that they've played nothing from The Fragile all night. A little disappointing, considering what's on that album, but perhaps the excesses of that record don't lend themselves to the more direct set the band is ripping through tonight.

Hurt's heart wrenchingly haunting atmospherics, as always, provide the perfect way to end the night, and as the last note careens around the stadium, the lights turn on and that's it. Fuck, I thought to myself - that was quick! Proof that time does indeed fly when you're having fun.

Reznor's one of a kind alt rock roadshow really is an experience in the truest sense of the word, and definitely something you really need to see to believe. It's kinda sad we don't have more people like him, and more bands that can straddle stadiums and arenas whilst making sci-fi rock concept albums about the end of the world, so it's an absolutely beautiful thing to see something as joyously dark in a place like this.

Join the conversation about the recent NiN live shows.