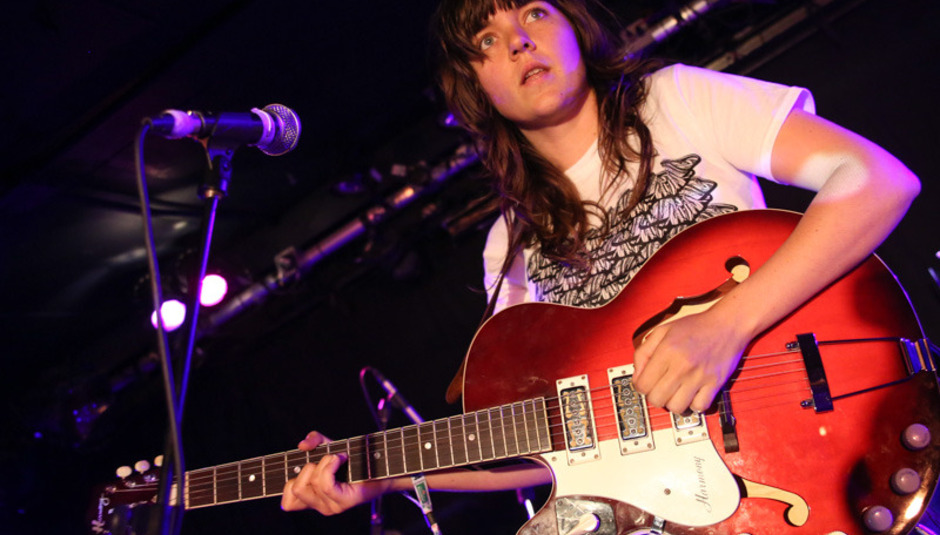 Now that our collective hangover from this year's Great Escape festival has subsided, it's time to share the picks of our weekend beside the season.

We saw a lot but with over 350 acts performing in 30+ Brighton venues, we barely scratched the surface. If you came here expecting full coverage, forget about it. It is impossible for anyone, let alone us to see more than a fraction of a festivals like TGE - I mean, even though we had four DiSsers on the ground, cramming in upwards of ten shows a day, none of us saw Klaxons or Kaiser Chiefs nor Kelis or various acts whose name begin with a different letter. What we did see however was a romping, womping, jangling, very mixed bag of bands, pianists and solo strummers.

There were a few acts who really stood out, so rather than boring you with the details of the stuff that was less than amazing, here are our writer's picks of the weekend.

Sean Adams: In 2014, you don't need to wander too far at any festival to see too-kool-for-skool kids, who seem more interested in how relevant their music is to the current music fashions than whether they're making something they truly believe in. It's easy to get excited and confuse all of these aloof synth-gazers and acceptably average grunge-chancers with their rumbling SoundClouds of professional sounding demos who seem fine online, and then through a fug of booze and eagerness to discover something, decide that they're special. By their very nature as a showcase event, festivals like TGE are going to have lots of bands who have had five minutes of blog-love before the buzzing classes click onto the next best thing, and I can live with the 'success' of these newbies (especially when they're as surprisingly "rad" as Royal Blood), but when you've seen the cycle of woah --> wane get increasingly quicker (it used to take six months for the bored backlash, now it's more like six hours), it's easy to forget that amongst the hubbub of hype bands that "people" (read: 26 or so bloggers, a few new music obsessed journalists and a hand-full of ears to the ground A&R scouts) are banging on about, there's occasionally some gold lurking in those steaming mounds of streams.

On a cursory listen, the much talked-up new album from Augustines sounds a bit like The National, but despite the hints of something sinister and sublime it lacks the light and shade, and comes across as somewhat over-played by heartlessly cool Kings of Leon-types (for the record, at the height of their powers KoL are one of the tightest, most mind-blowing live bands I've seen - get over your snobby selves!). You could, if you were merely flicking through thousands of bands a month, easily dismiss these chaps from New York as yet another overwrought indie band for bearded people in designer vintage beanies and lumberjack shirts. To do so, as I've discovered, would be incredibly foolish.

From the first Springstreen strum to the last cymbal crash, Augustines are clearly on a mission to lift everybody in the Concorde II out of whatever slump they may be in and take them off to a planet where - in spite of everything that makes us fragile humans - dreams come true. They have that uncanny ability to thunder through a ditty that leaves you gasping to catch up, and yet somehow, despite barely registering little more than the melodic syllables of the lyrics, they make you want to shout along as if your favourite song just came on at closing time in the greatest bar in the universe. As they suck you into their vortex, it takes a lot not to let your fist fling into the air... let's not mention the thrusting motions my other limbs are making as it later becomes apparent that this usually timid music fan was totally lost in rock&roll reverie.

For first time in eons, along comes an undeniably brilliant live band who give it their all, who sing-a-long regardless of whether they have a microphone, and who love their band more than anyone else ever could, and it ends, and you have to walk out of that room and continue watching new bands (I pity the poor aloof beanie-wearing berks who wouldn't dream of breaking into a sweat, like, ever, that I saw next... I'm not sure it was my pity he was gunning for).

Elliot Mitchell: Few artists have managed to carve a niche quite like Courtney Barnett (pictured above, by Mike Burnell) in the last year, and with just two EP’s she has seemingly established herself as one of the most exciting, poignant storytellers releasing material at the moment. It is with little surprise then that her show at The Dome Studio (one of three over the weekend), taking place late on Friday night saw lengthy queues snake down New Street with what seemed like half the festival trying to get into the little-over 300 capacity venue. From the offset it became perfectly apparent why, as despite how on record one is naturally drawn to her deadpan delivery and immersive lyrical content, Barnett’s live show is a gloriously visceral affair that adds a further emotional punch to her already-relatable material. Of course there were moments of tranquility to be found dotted throughout her sweaty performance, but it is the storming renditions of hits ‘Avant Gardener’ and ‘History Eraser’ that resonate most with the crowd, firmly establishing Australia’s finest export of 2014 as a firm festival favourite.

Lisa Knapp / You Are Wolf

Joseph Stannard: Charismatic London-based folk musician Lisa Knapp swerved from the mainstream for her live performance at Brighton Dome’s studio venue. She’s more than capable of working in an ensemble setting, as her recent album Hidden Seam demonstrates, but here she took the solo route, switching and looping instruments as well as her captivating vocal to magical effect, an approach taken on her essential new May-themed EP, Hunt The Hare. Combining traditionalism with rough ‘n’ ready electronics (the field recordings and sound effects woven through May Garland are a terrific touch) she proved herself a versatile and adaptable artist. It’s also gratifying to hear an artist emit a loud, earthy “Thank FUCK that worked” after nailing a complex composition.

You Are Wolf aka Kerry Andrew and Andy Furlow employed a comparable tech set-up and similar influences to create music distinct from Knapp’s but equally beguiling. Andrew is an effortlessly charming and flamboyant frontwoman possessed of a truly beautiful voice, which also served as a seemingly bottomless repository of clicks, clacks and hums, layered and looped into richly absorbing tapestries of sound. Like Knapp, Andrew is a serious musician with a sense of fun and an infectious sense of humour, much in evidence when she quickly dispatched the one drunken heckler in attendance. Along with artists such as Alexander Tucker, Kemper Norton, Lutine and Lost Harbours, Knapp and Andrew are clearly dedicated to pushing British folk music forward into an uncertain future rather than insisting simply on its preservation.

Other Things We Enjoyed at TGE14

Sean Adams: There was a bumper crop at this year's Great Escape. The class of 2014 has some wonderfully melancholic younglings in the form of Annie Eve who took my breathe away in the Spiegeltent and the ThomYorkian/JamesBlakian Douglas Dare - who's surely a future Mercury nominee - in St Mary's Church, left me wrestling for the perfect hyperbolic descriptor (I'm still at a loss). Norwegians Sea Change - no not that band from Nottingham nor a Beck tribute - were a nice surprise discovery, taking all the best bits of Vespertine and spiralling them through a Kompakt lens of cascading electronics and uplifting loops. Choosing to see a band based on their name can be disappointing but with panpipes, flutes, a recorder and loads of droney Animal Collectigasms, Canadians DOOMSQUAD delivered on their splendid moniker, and then some.

TGE is not just about brand new stuff. Of the acts who've got their third, fourth or more album on the way. Catching locals Esben & The Witch making a heavier than we remember, hell-spun sprawl of Portishead-gone-Swans noise was a refreshing reminder why so many fell in love with the band in the first place - if a bit weird to them in the sunshine. Phantogram finally have a deal in the UK (Voices is coming out at the end of June via Island Records) and their set headlining the DiS bill on Friday night was one of those SHITTIN' CRIKEY moments when you remember that a band can skirt around the edges of notoriety whilst possessing epic shoegaze-gone-hip-hop anthems. In a word, they were PHANTASTIQUE. Obviously we only booked acts we really love to play our stage and the sets from FEMME ("like Gaga with trousers on" remarked a friend, which was fairly spot on), White Hinterland (soulful loops and soulful grooves and soulful voice...) and the brash kick in the ears, heart and groin that was DEATHCRUSH has still left me feeling bruised, but strangely ready for more Scandi-noize. Thank you TGE, we'll see you for your 10th Birthday next year.

Elliott Mitchell: My honourable mentions include recent Bella Union signing Ballet School, who opened the weekend at The Green Door Store and set the bar high early on with their 80’s influenced, yet distinctly modern alternative pop, Rosie Blair energetically proving herself as both a hilarious and phenomenally talented frontwoman. George Ezra’s last minute show in the tiny room above Fitzherbets was also just as dreamy as one would expect, and Superfood’s late-night performance at a secret house party on Saturday night ended the weekend in a raucous (and unsurprisingly sweaty) manner, perhaps perfectly encapsulating why the best moments at these festivals are the ones you cant plan meticulously beforehand.