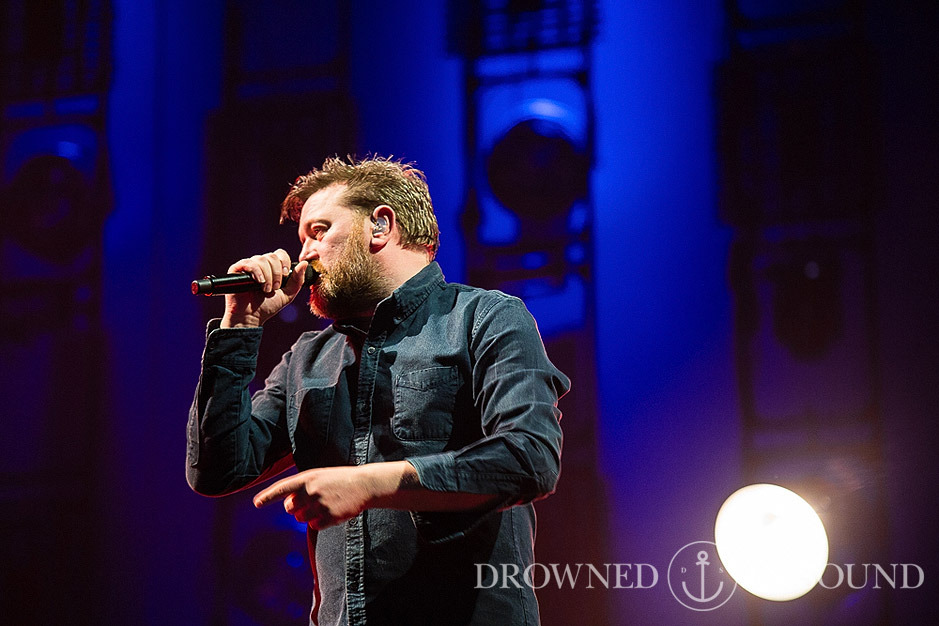 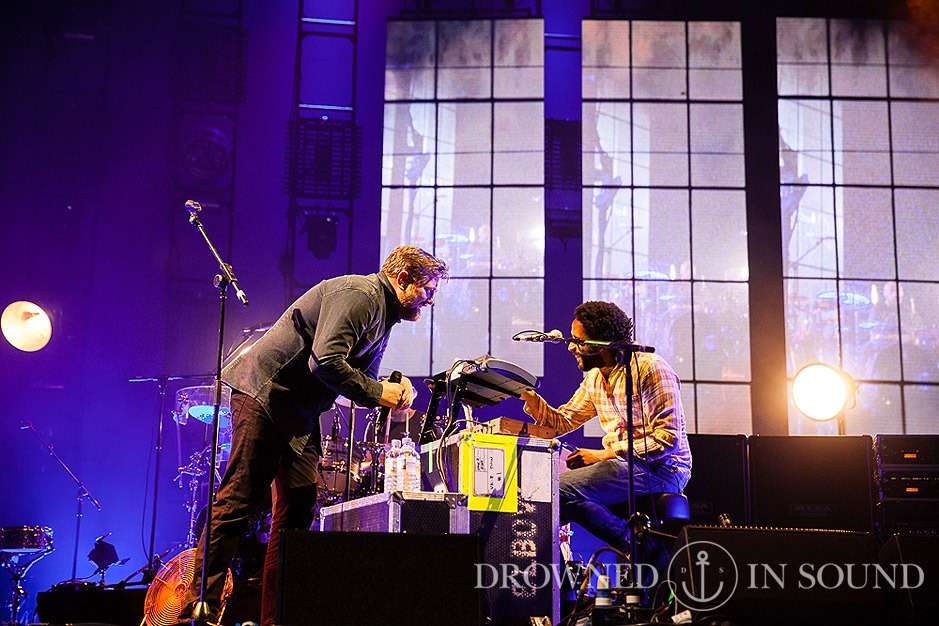 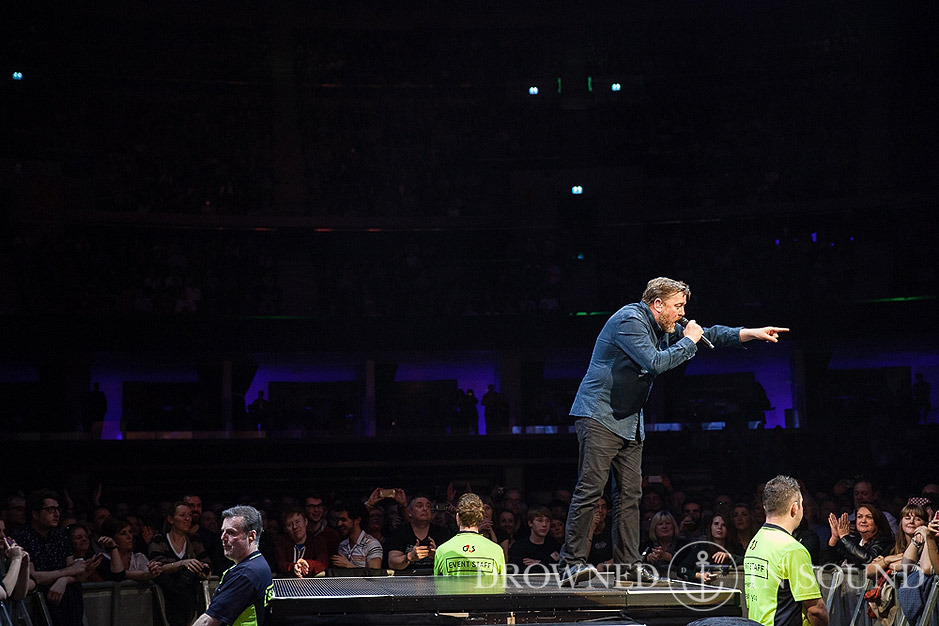 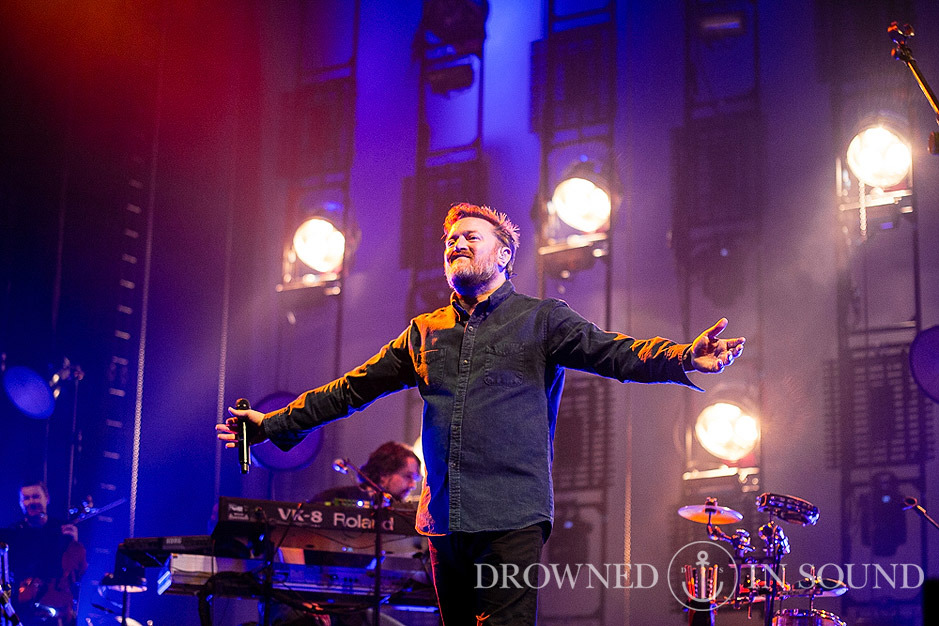 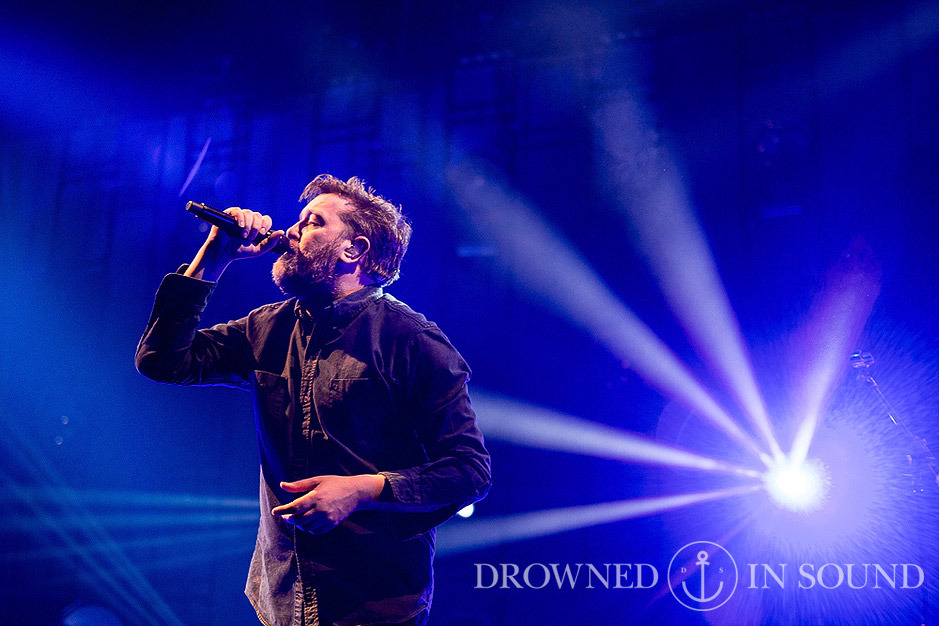 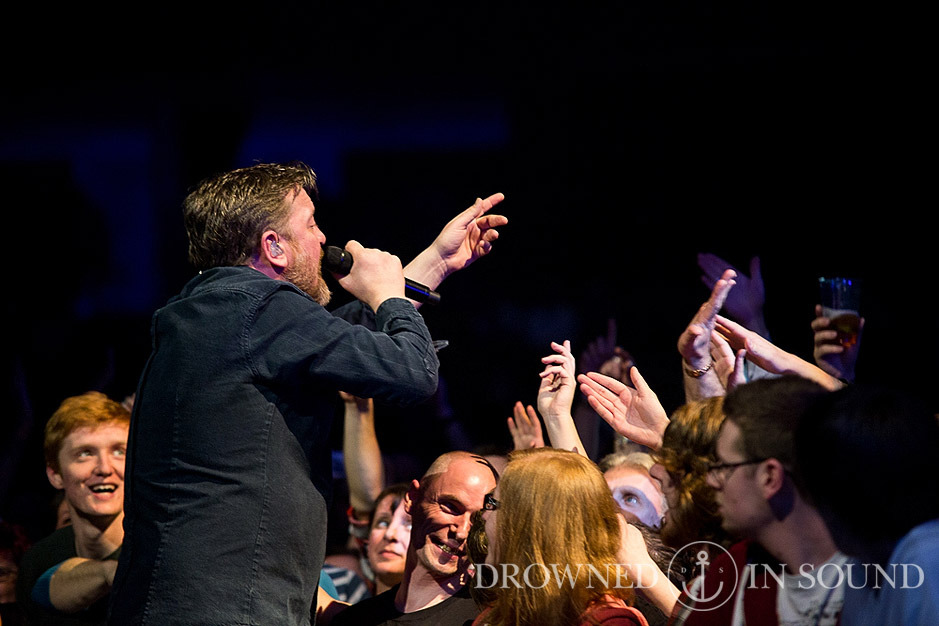 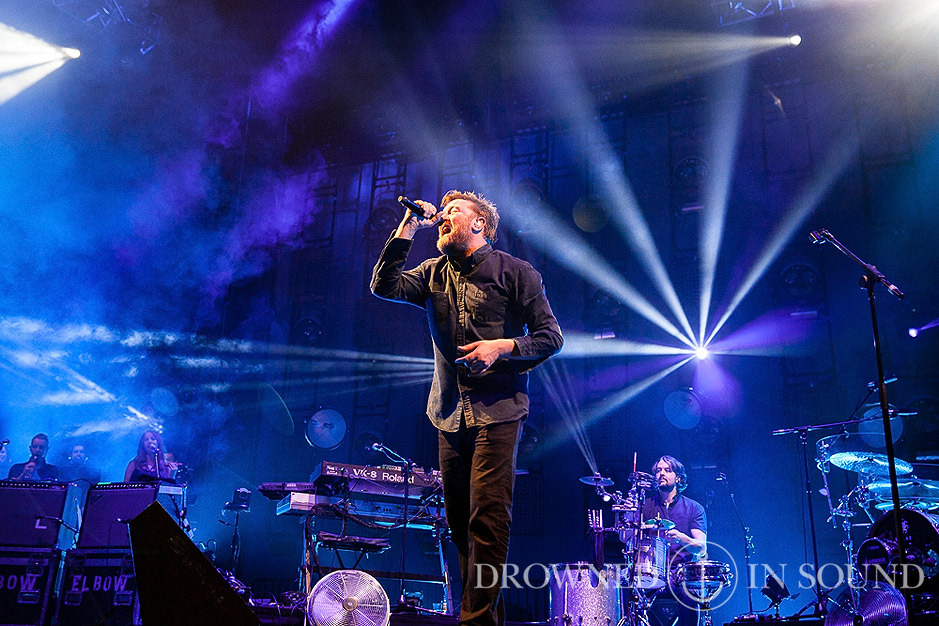 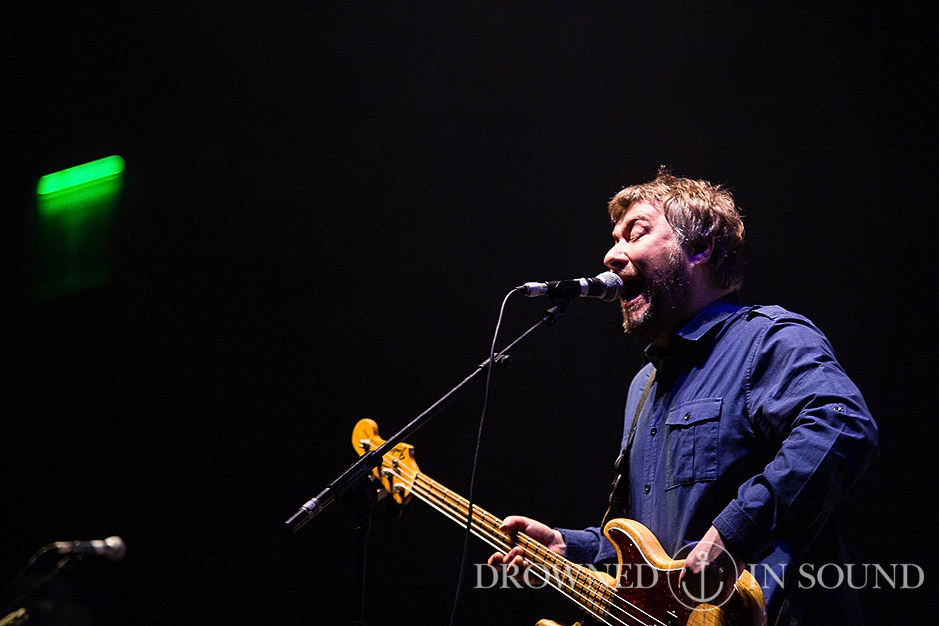 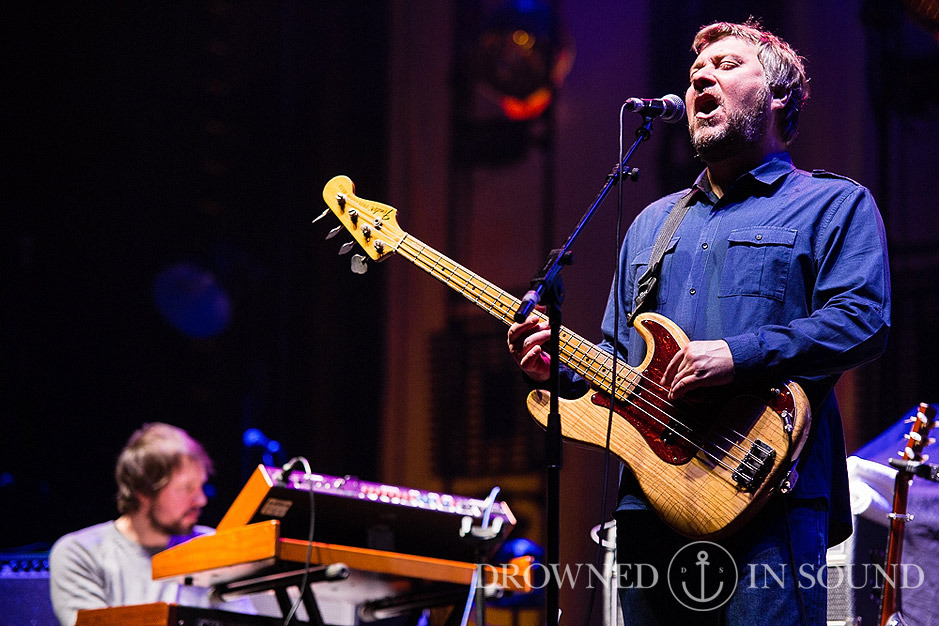 Nearly a decade ago, when Elbow’s 2005 record Leaders of the Free World failed to announce their anticipated transition to the upper halls of music’s A-List, the chances of seeing them record even one more album - let alone ever claim the glory of headlining Manchester’s biggest venue – were starkly slim and implausible. Yet tonight, the sold-out banks of seats around Manchester’s Phones 4u Arena tells the tale of what is one of the most extraordinary success stories in modern British guitar music: a band who somehow came back from the brink to become chart-toppers and stadium-fillers against all odds.

In truth, Elbow weren’t doing anything wrong before their mainstream breakthrough in 2008; it was just about seizing the moment when it came, albeit belatedly. And tonight is an extension of that moment. Guy Garvey is now not just the everyman down the pub with a drink in his hand, but the everyman down the pub with a remarkable ability to galvanise a crowd. Dashing up and down the lit-up catwalk into the middle of the arena, occasionally stopping for a hug or to let someone else take the microphone for a moment, he comes across as both the most unlikely and logical frontman in the world in the same breath. And that voice remains impeccable – a ragged and distracted angelic choirboy who got mistakenly sent to Bury and found he liked it there. The band support him with subtlety amidst their years of experience and class – rising and falling, prompting and exploring; all the while perfecting that huge-yet-intimate sound that Elbow have come to call their own – a sound capable of filling stadia while remaining unique and personable.

Their song collection is now so strong that they can afford to leave out tracks such as ‘Newborn’, ‘Forget Myself’ and ‘Grace Under Pressure’ and not have the overall flow suffer (though if there is the tiniest of criticisms, it is that the focus of tonight is all shed upon their last three records). Most notable tonight is how the new tracks from The Take Off and Landing of Everything are graciously welcomed and already have bedded into the collective consciousness. Opener ‘Charge’ is both matey and threatening in equal measures, ‘Fly Boy Blue/Lunette’ unfolds intelligently and introspectively around while ‘Real Life (Angel)’ is remarkably sung back with word-perfect precision by the crowd. In between that are weaved a stirring ‘The Bones of You’, a shuddering ‘The Loneliness of a Tower Crane Driver’ and a shimmering, subtle ‘Mirrorball’ with the arena bathed in shards of light. They also come out to the middle of the arena with only a piano for company to do ‘The Blanket of Night’ and ‘Great Expectations’. Rarely has a venue the size of this arena seemed so intimate. And rarely has it been filled with a song of such beauty and majesty as ‘My Sad Captains’, already greeted as a long-lost friend by the crowd and possibly the finest song Elbow have ever written. Stunningly moving, many of the crowd are in tears by the end.

A euphoric, stirring duo of ‘Starlings’ and ‘Lippy Kids’ take us into the encore, and at this moment it's clear that tonight has become a celebration of where this band have come from, and where they’re at. They're a band who started off in hushed local tones and spent half their careers supporting others as they went on to greater success (a point Garvey acknowledges tonight when he thanks support act Jimi Goodwin for taking them on “their first UK and American tours” with Doves) have become icons of the city – homecoming sons. As if to finish everything off, the closing ‘One Day Like This’ is a bellowed, celebratory joy with everyone on their feet, arms in the air. It’s a magnificent communal moment of triumph and for those who seek to believe that sometimes, miracles really do happen in music. Elbow – the little band who could. And did.