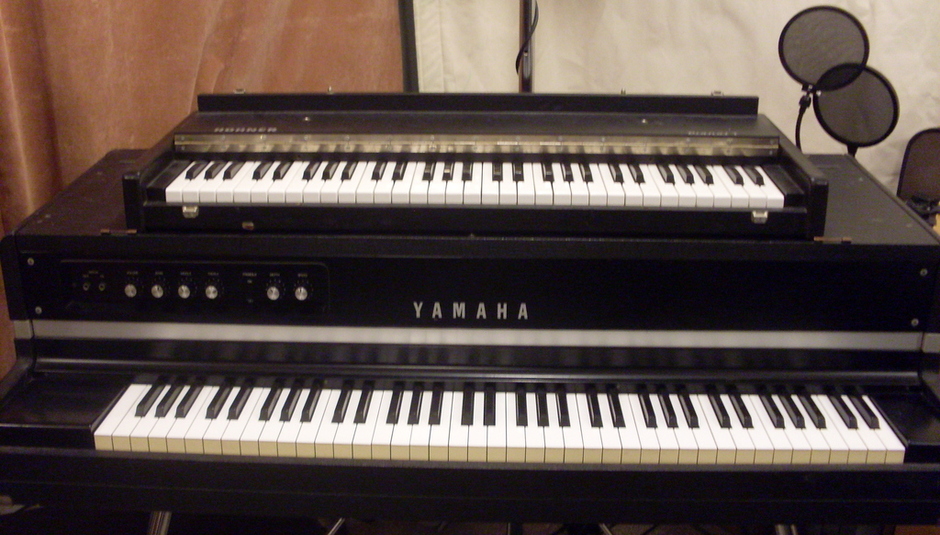 David Brewis of School of Language and Field Music fame has just finished his second solo album, Old Fears (out this week on Memphis Industries). As well as engineering, producing, mixing and mastering every Field Music and SoL release, he also produces for other bands from his studio in Sunderland. He gave DiS a special tour of where the magic happens...

The Field Music studio is not a luxurious place. A couple of rooms built inside an industrial unit with charity shop curtains on the walls, a lot of (mostly very cheap) equipment and a coffee machine. I don’t hold with the mystique that surrounds vintage and rare equipment. The way I see it is you use what you have to make the best sounds you can. That’s just as well because the analogue synths and boutique microphones are mostly way out of our price bracket.

The pinnacle of late-70s keyboard technology; a Hohner Pianet T perched atop the Yamaha CP70B

A lot of our most characterful gear is therefore from the period from, say, 1979 to 1986. An era which cool has not quite reclaimed. The pick of the bunch is the genuinely sought after Yamaha CP70B electric grand piano, which really is a baby grand piano, albeit one which splits in two (the keys/hammers in one section and the harp in the other) and has a pickup on every string.

If you see any concert footage of huge bands in the early 80s, chances are they’ll be using one of these. They were cutting edge. Grand pianos are a bit of a nightmare on a loud stage so the CP70 solved a big problem at big gigs. However, they are excruciatingly heavy. They were supposed to be portable but portability is relative and this is the kind of instrument a team of roadies was made for. I suppose it sounds somewhere in between an acoustic piano and a Wurlitzer or Rhodes electric piano (which use tines or bars rather than strings to make the sound) but it is beautiful in its own right. It features on almost every track on Old Fears, as well as playing a big role in every Field Music record. We do have a nice-sounding upright piano in the studio but it wouldn’t have sounded right for this record.

The harp and electronics inside the CP70

We might not be gear obsessives but it’s sometimes worth seeking out the unusual in order to get a sound that fits. The world of small-scale manufacturers and revampers has been our friend here. Most of the singing on the record was recorded with one of two microphones. First is the Oktava(mod) MK319 which is a Russian microphone tinkered with by a New Englander named Michael Joly. We do have a much more expensive, and great-sounding, early 80s Neumann U87 but the Oktava seems to suit my voice better. We also use it to record drums and acoustic guitars, not that there are any acoustic guitars on the School of Language record.

The second main vocal microphone is a super-cheap, Chinese-made Nady ribbon microphone which was recently souped-up by a company from York called Xaudia. This has also been in service above our drum kit since 2006. I’ve become a huge fan of ribbon microphones. They’re quite simple so even good ones can be quite cheap. There’s a bloke in Seattle called Jon Ulrigg who builds his own “Shinybox” mics using Chinese mic casings. Ours has also just had some remedial work done down in York in order to reclaim its regular place sitting in front of our Fender Deluxe Reverb guitar amp. I’d guess that in the last 5 years 95% of all of our electric guitar parts have been recorded with this mic and this amp.

From left to right; the Shinybox Ribbon, the souped-up Nady, and the Oktavamod MK319

For years my main guitar has been a battered late-60s Gibson SG Special. It’s an amazing guitar with a very particular sound and it’s all over every Field Music record and the first School of Language record too. However, it has two problems. For one, it really only does one thing. It doesn’t have an adaptable sound. Secondly, it’s such a strange mutant hybrid that if it was ever lost or stolen or damaged, there would be no way to replace it. So, to counter this (and as a combined result of wanting to get closer to the guitar sounds on Eleanor Friedberger’s album before I went away on tour with her, and also of being hugely jealous of how great Emily from Stealing Sheep sounds) I decided to look for a stratocaster-type guitar. Lo and behold, the aquatics/guitar shop (- still haven’t figured that one out so don’t ask) around the corner from my house was selling a Vintage V6 strat copy. I tried it out. It felt nice. It sounded nice. It was so cheap I couldn’t resist. It needed a little bit of tarting up but that guitar not only got me through the tour with Eleanor, it’s also the main guitar sound on the new record, along with a Vintage V52 tele copy which I picked up a little bit later. I wanted something which was thin and wiry and these two cheapo numbers did the trick. They’ve also helped me to hone my Nile Rodgers and Prince impersonations.

The best guitar I’ve ever bought from an aquatics shop; my Vintage V6 strat and its tele-aping brother.

The new School of Language album, Old Fears, is released this week via Memphis Industries.

School Of Language have the following shows booked: 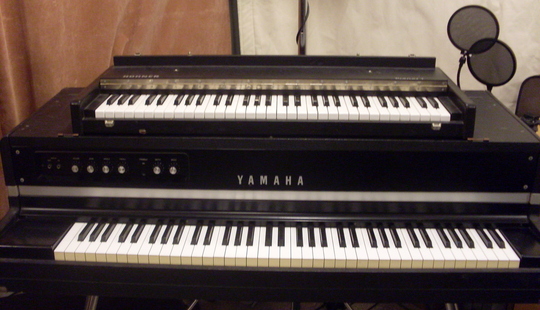 In Photos: Broken Bells @ Shepherds B...

School of Language's Best of the Stra...