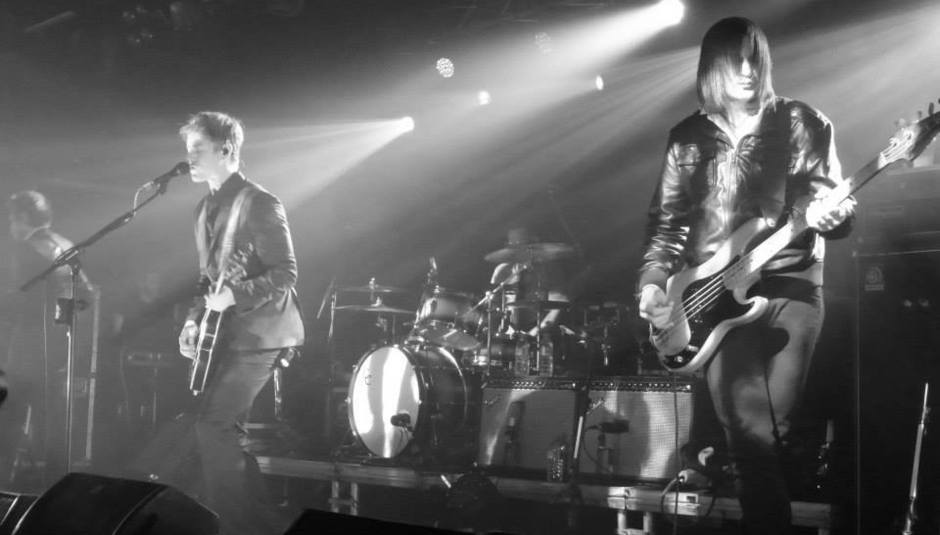 With the NME's weekly sales figures having reportedly fallen below the 20,000 mark, it's perhaps no surprise that tickets for their awards tour have also moved slower than in previous years. Gone are the days when the tour would be a complete sell-out months in advance. When bills such as the halcyon year of 2005 when The Killers, Bloc Party, Kaiser Chiefs and The Futureheads shared the same stage night after night. Maybe it's a sign of the recession hit times that punters don't have the disposable expenditure anyway to afford going out to a gig every evening? It's certainly a worrying predicament, particularly when considering this year's line-up represents arguably the NME Awards' strongest bill in years. Indeed, the two outfits at the top end both enjoyed complete sell outs in their own right on their most recent visits to Nottingham, Temples only as recently as last month. While Interpol may have received lukewarm reviews of 2010's self-titled fourth long player yet they're still undoubtedly one of the most commercially viable bands in the world. Nevertheless, with tickets still available on the door even the touts found themselves virtually giving them away by showtime.

For openers Circa Waves, the past six months have been something of a dream come true. Having risen from the status of virtual unknowns outside their home city of Liverpool to recipients of the biggest A&R scramble in recent years, it's to their credit the weight of expectation on their youthful shoulders seems anything but a burden. With at least half-a-dozen bonafide radio friendly hits-in-waiting among their wares, it's understandable their confidence has soared from the nervous band which made its Nottingham debut at the comparatively tiny Chameleon venue only last November.

Royal Blood also played the same venue a few weeks earlier, barely attracting double figures in the process. Tonight's show, in front of a three-quarters full Rock City doesn't seem to phase them, even if they still sound like a work in progress for the most part. Lazily compared to The Black Keys and Death From Above 1979 purely on the basis of their only being two of them, we're more inclined to picture them playing air guitar in their bedrooms to The Cult's Electric or Queen Of The Stone Age's Rated R. However, time is on their side, and with their name seemingly adorning every single festival line-up known to man this summer, the opportunities to become every bit as good as their (suspected) influences are there for the taking.

Almost a year to the day since Temples made their Nottingham debut in the same venue supporting Suede, it's testament to their incredible work ethic and ability to pen the odd insatiable tune or three that they find themselves so highly placed on the bill here. Last month's excellent debut Sun Structures having already given them a top ten placing in the official albums chart, they're the band most likely to be headlining venues of this size before too long. Playing a set familiar to anyone that's seen them over the past twelve months, it's a sight to behold when the words of 'Shelter Song' are bellowed back at singer James Bagshaw almost to a man (and woman). The sky's the limit for the Kettering four-piece, and if the rate of progress made over the course of the last year is anything to go by, maybe just a fuelling point for stratospheres far and beyond.

Embarking on their first UK tour since 2011, Interpol stride onto the stage as if making up for lost time. Paul Banks jovial charm coupled with Daniel Kessler's suave manoeuvres and hugely underrated bass player Brad Truax making us forget Carlos Dengler ever existed are a ferocious three-headed beast on this form. Playing a set heavily reliant on material from Turn On The Bright Lights and Antics; only 'The Heinrich Maneuver' is aired this evening off 2007's Our Love To Admire while nothing at all is played off its much-maligned successor. Having been in London since the turn of the year putting the finishing touches to their soon-to-be-released album number five, it's the three new songs aired this evening which hint at a heavier, more aggressive dynamic than either of its most recent predecessors. The anthemic 'My Desire' mirrors 'Obstacle #2' or 'Leif Erikson' (given a welcome run out during the encore later) in its grandiosity, while 'Anywhere' glides along speedily and effortlessly due to Kessler's incessant, angular riff. Best of the lot though is 'All The Rage Back Home', an epic statement of intent that finds Banks at his most ardent vocally while Kessler's guitar chimes like Peter Buck at his most opulent during REM's Murmur heyday. By the time 'Stella Was A Diver And She Was Always Down' brings proceedings to a close, the resounding cries for "more!" tell their own story. Interpol are back on top form. Watch this space.