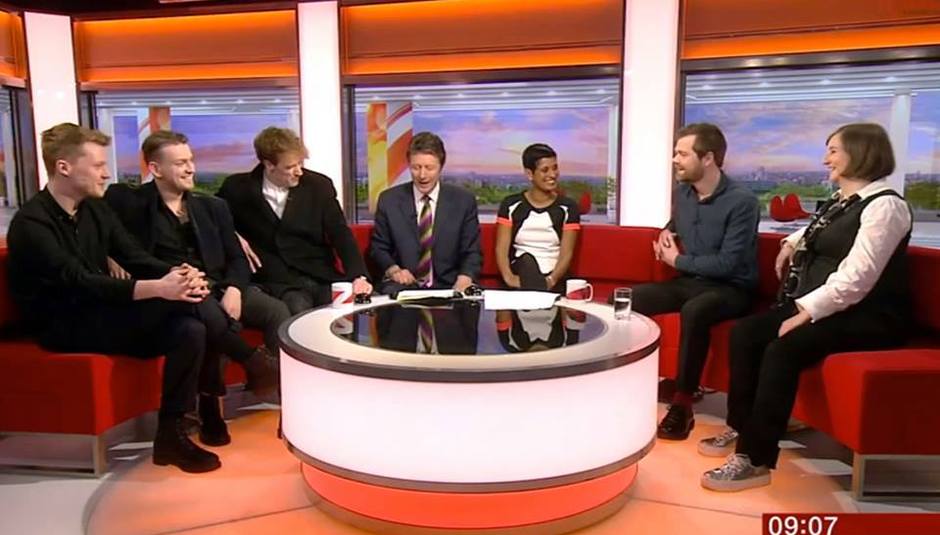 For once, we’re going to keep this introduction bit brief, but did you see The Crookes on BBC Breakfast and have you seen this footage of Nirvana playing the Octagon two months after Nevermind was released?

There’s even a bootleg of the audio from the gig in full too! Amazing!

After getting us hot under the collar with their single ‘You’ in December, Tropic Of Youth are now about to release their debut EP Sun City. Their sound is one that’s strikingly on the current retro trend, in that it’s so sun-bleached it makes you think of the beach parties they used to show on MTV in the ‘90s. But there’s a choppiness in the guitars and a thirst in the bass that’s like putting Foals doing ‘My Number’ in the middle of Talking Heads’ Stop Making Sense show. Like beach balls bouncing in syncopated rhythms (plus a bit of Vampire Weekend and Theme Park) it’s nothing if not impressive from a band in one of the country’s most land-locked cities. Sun City is out on April 7th…

… Which is the same day that the Hawley Jnrs in High Hazels release their EP, In The Half Light. The lead track, ‘Summer Rain’ is almost like what Tropic Of Youth would sound like if they were pitching for the ‘60s instead; their guitars glimmer and their choruses rise in a way that should make The Crookes, and any other guitar-pop nostalgists, very nervous indeed. Having sold out The Harley at the back end of last year, High Hazels launch this EP with a gig at Queens Social Club on April 11th...

… Which is then only three days before The Crookes themselves release their third album, Soapbox. Have a listen to ‘Before The Night Falls II’, the B-side to their recent single ‘Play Dumb’, ahead of their next one, ‘Don’t Put Your Faith In Me’, out May 5th, and the band’s return to the Leadmill on May 31st.

Now if you’re still mourning the absence of bands like Rotary Ten, Fury of the Headteachers, Champion Kickboxer, Heartyeah, and Nat Johnson and the Figureheads, you’ll be pleased to know that some of the people what were in them have now released an EP as Public School Battalion. It’s called Dead Tapes and it’s Dead Good. With dangling guitar lines and gripping synths that stick out at all angles, it’s almost like if American Football had been a C86 band with a dense indie disco heart. You can hear the EP on Bandcamp, and get a copy on April 18th when PBS play the Redhouse. Also on the bill are Extra Lives, who appear to have formed from the ashes of Smokers Die Younger no less. Now who fancies getting a pint at the Casbah before Fuzz Club this Thursday?

Hey, remember indiepop trio Standard Fare too? Well now singer Emma Kupa has done a couple of songs with Darren Hayman off of Hefner. ‘Boy, Look At What You Can’t Have Now’ isn’t even that twee either, but dreamy, misty and piercingly catchy. There is a bit where they say “baby” quite a lot though. But the 7” on Bandcamp!

So the three main Tramlines headliners have been announced as Katy B, The Cribs and actual bloody Public frickin’ Enemy. Something for everyone there, surely? And loads more goodness to come, with lots of other live music in the meantime, including a mini festival in the shape of the Detestival 2014 Weekender. And also films.

Because we all like going to the pictures, and The Five And Dime Picture Show have been putting on some amazing screenings over the last few months, from Harold And Maude to Garth Marenghi’s Darkplace IN FULL. This Friday they’re showing a 10th anniversary screening of DIG!, which is a documentary all about how fucking crazy the blokes from the Brian Jonestown Massacre and the Dandy Warhols are. You'll find the event down one of the shiny refurbished corridors of Sheffield Students’ Union.

At the Showroom a couple of weeks later, there’s going to be an equally cool screening of We Jam Econo: The Story of the Minutemen, with introductory talks by Dr Brian Kennedy from the University of Sheffield, Adam Zejma from nearby DIY label Tye Die Tapes and Max Templer from gig promoters GET RAD, plus a Minutemen disco in the bar after. That’s on April 15th, then on the 17th, Minutemen bassist Mike Watt himself plays at The Harley. No kidding!

Also worth noting is what the good folks at LaDIYfest Sheffield are up to, which is getting loads of bands to do Hole covers at the Audacious Art Experiment on April 26th to celebrate the 20th anniversary of Live Through This! And Semi Detached are doing another Boat Party in May! And The Harley are putting on Macauley Culkin’s pizza-themed Velvet Underground tribute band! I know, right?

April 15th – We Jam Econo: The Story of the Minutement film screening – Showroom

April 26th – LaDIY Through This – The Audacious Art Experiment

May 6th – September Girls – The Harley

May 17th – Courtney Barnett – The Harley

May 30th – The Pizza Underground – The Harley

Lo-fi slacker-pop types Pet Rock have been very busy lately, filling their Bandcamp with innumerable endearingly catchy demos. Now we’ve stumbled upon Alex Crayon, which appears to be a solo project by one of ‘em. This stuff’s even gentler, lusher and just a little bit sentimental, but with the same charming bedroom quality. Nice.

Now, for (possibly) the first time on Drowned In Sheffield, some post-rock. Don’t really know much about Fly On Byrd, Fly On, and this is the only track that we can find online, but it’s pretty great – sharp, explosive and dramatic. Expect to see them opening for 65daysofstatic in the inevitable future.

Honeybuzz have been gigging round London Road for a while, but now they’ve got some songs on the internet for you to listen to. In their own words, “vocals could be better”, but they’re another welcome addition to the Sheffield fuzzy rock oeuvre…

… Which is just as well because raspy pop-punk outfit Pawshaker have packed in, but they have at least left us some posthumously released demos on Bandcamp.

Finally, three more treats to leave you with: a wonderfully abstract ten minutes from Toucans which was written for a lovely man called Patrick to dance to, more squelchy electropop goodness from Max Langley who seems to have deleted all his other songs, and a remix of Blossomer’s ‘To The Sea’ courtesy of Katie off of Sky Larkin. Enjoy.

You know you can always email me at robertccooke@gmail.com or find me on Tumblr and Twitter, right?