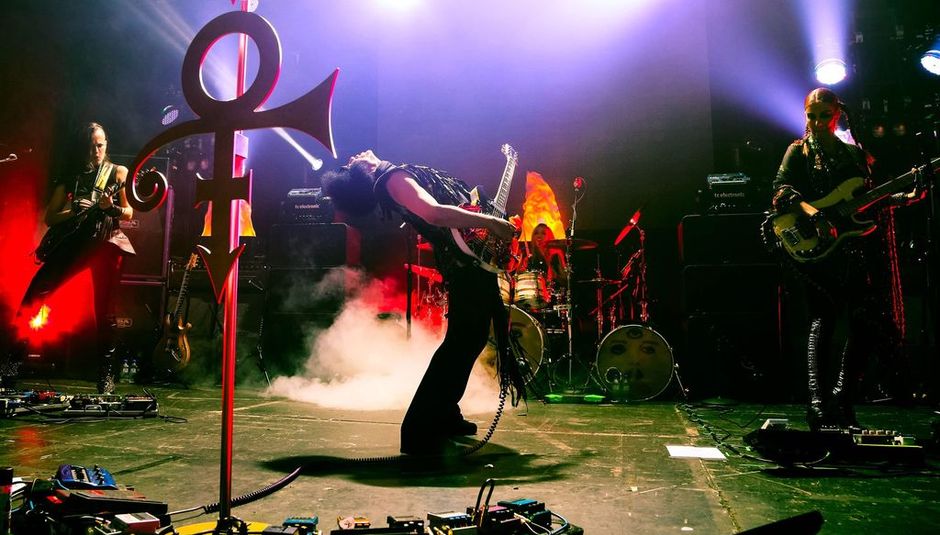 There is a thin, boisterous, yet well-humoured queue of people stretching back a good quarter-mile along Oxford Road from The Academy: it's well-oiled tail ending up just outside The University of Manchester’s Whitworth Hall. TV crews are out in force and somewhere above us, the whirr of a helicopter tells us that we’re being monitored from all sides tonight. Touts are slowly making their way along the road offering to buy any spares but no-one is selling. Tonight, this is almost certainly the hottest ticket in the UK. Maybe even the world. Tonight, Prince is in Manchester.

It’s certainly true that the 2014 “Hit and Run” tour has been a slickly designed, methodically planned and brilliantly orchestrated piece of organised chaos: perfectly tuned and tooled to eke out every bit of PR possible for The Purple One. It’s entirely understandable, also, that many people have been left disappointed by day-long queues, people pushing in, unexpectedly curtailed gigs to allow second shows and (in the case of Manchester) a split-second ticket sale and high prices. All of these issues carry some degree of gravitas and weight of truth to them. Aside from the obvious PR benefits of almost every media outlet covering the tour with a near-fervent vigour, this tour has (for most people anyway) rewarded those with a true love and belief for Prince with some unique, memorable shows. In the queue, I talk to several people who have travelled from different countries…even continents to be at the tour – camping out and standing in the pouring rain to see someone who they genuinely adore. For people with such passion, the chance to witness an artist of Prince’s magnitude in small venues is surely the minimal reward possible?

Waiting for him to hit the stage, everyone stood inside the confined box of Academy 1 - which somehow feels much smaller than usual when you’re so expectant - knows and appreciates how lucky they are. This translates into a wonderfully celebratory atmosphere before the three female members of 3rdEyeGirl come out to deliver a message asking for “no phones, no cameras, no videos – we just want to communicate directly with you tonight”. And then we’re straight in. Lights down, growling bass groove, a familiar voice coming from the wings. Before you know it – resplendent in sparkling afro and with sunglasses perching on his nose – Prince is in front of us. The guitar crunches into a slow, languid-funk version of ‘Let’s Go Crazy’. Whereupon the place erupts.

What follows over the course of the next three hours is one of the most remarkable displays of musical talent, virtuosity and sheer control that I’ve ever experienced. Taking Prince himself aside, the band are quite astonishing in their abilities. Drummer Hannah Ford and bassist Ida Nielson are symbiotically in touch with each other and the music, nimbly weaving around the tracks with a loose precision that stays insistent and perfectly funky, even when the jams continue past the expected concluding point. And lead guitarist Donna Grantis is stupendously gifted – trading licks and lead solos with Prince with an air of utter confidence and impunity. As a live band, it’s hard to think of many better.

As for Prince? He is a consummate, unique showman of the highest calibre. To witness his ability to control a crowd with a flick of his hand or a nod of his head (and I make no apologies for getting hyperbolic here – he is entirely deserving of such praise) is jaw-dropping and quite astonishing to witness. Every step, every glance, every move is so indefinably cool and uniquely his own, yet most gratifying of all is the way that for every single moment of tonight (close to two-hundred of them), he looks as if he is having the time of his life. Broad smiles, deliberately hamming up his guitar moves, conducting the crowd with the microphone or the neck of his guitar, this is a man uniquely in touch with his own music and his own heritage: lapping up the live experience and the acclaim, and giving back the compliment in spades, screeches and sonic joy.

As the gig progresses, you quickly realise that the experience of seeing Prince live is not for simply “hearing the songs” but as an immersive experience – a communal joy of music and a lesson in the history of funk and rock & roll. The memorable hits (a taut and muscular ‘When Doves Cry’, a celebratory 'Starfish and Coffee', a sparkling ‘I Would Die 4U’ and a shuddering ‘Housequake’ alongside a whole series of teaser snippets, outtakes and cross-pollinations) become simply recognisable interludes in the overwhelming, dizzying wave of funk and soul that envelopes a typically cold, unwelcoming musical space in the south end of Manchester city centre.

There’s an argument often made by non-fans of Prince that from a studio output perspective, he doesn’t actually have that many great songs from the early 90s onwards, and certainly the last 15 years would suggest some truth to that. Live, such things cease to matter. This is an artist in utter control of his material and his abilities, and in possession of a quite remarkable band. Because of this, anything is possible in the live setting. At opposite ends of the scale, a song as lyrically banal as ‘Screwdriver’ becomes an explosion of energy, while a masterpiece such as ‘Purple Rain’ is almost overwhelmingly beautiful to endure. And as he plays ‘Nothing Compares 2U’, people around me are in tears. Actual tears down cheeks. Remarkable.

Three hours blur past. We get five encores - house lights come on, then go down again as the cacophony of screams and whoops mean that unlike with most predictable encores, you get the impression that he and the band simply cannot refuse to return to the stage, despite curfew pressures. Finally, after a frenzied and hyper-funked ‘Colonized Mind’ and ‘Cause and Effect’, the dark of the Academy is illuminated for a final time, as ‘PretzelBodyLogic’ plays and the security begin shooing people out. Yet three hours and fifteen minutes after the gig started, at least half the audience remain until the last possible moment, hoping for something more – one final treat. It’s an incredible testament the musical ability of the man and his band, as well as the sheer joy and life-affirming nature of a quite remarkable show. The secrecy and marketing of the tour's PR campaign may have been cleverly calibrated to bring forth maximal attention for the tour, but you simply have to back up such attention with a performance that justifies the hype. And this was a performance from the very highest possible drawer of skill, ability and showmanship. His name is Prince. And by god, is he funky…