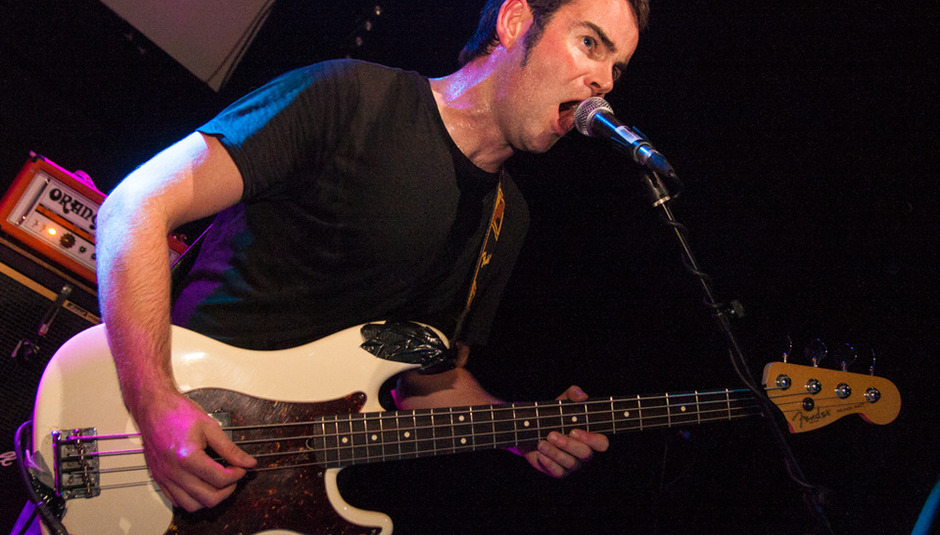 Mark Foley was right. There are no ghosts in the town of Brighton, even on a cold Tuesday night in November. With a vibrant atmosphere reminiscent of a bank holiday weekend in every corner, thanks in no small part to the large delegation of trade union representatives congregated in and around the seaside town for Unite's annual conference, it only adds to the already stimulating buzz. Of course Future Of The Left don't require any pre-ordained waves of expectation these days. Entering their ninth year in existence - not to mention the past-life enjoyed by frontman Andy Falkous and drummer Jack Egglestone's (sadly absent this evening on paternal duties) stint in cult heroes Mclusky - this year's fourth long player How To Stop Your Brain In An Accident may well be their finest collection to date. Nevertheless, with a back catalogue full of riches too, the guessing game that ensues among devotees huddled round the bar is more about what songs they won't play this evening than what's included on tonight's setlist.

Beforehand, it's left to hotly tipped trio The Wytches to confound expectations surrounding their own band. Initially - and perhaps unfairly - aligned to the burgeoning psych scene. Due in no small part to their mis-spelt name and logo which bears more than a passing resemblance to the one used in the Nuggets series of garage/psych rock compilations, it's clear from the outset they're more than just another retread of that particular bygone era. Which can be interpreted in one of two ways. Either the band are at pains to distance themselves from such tenuous associations; especially in light of the industry furore currently taking place to secure their long term signatures to any number of labels in waiting; or they're merely chancers throwing as many different genres against the wall in the hope one firmly sticks. Without wishing to be cynical, we're swayed ever so slightly towards the latter school of thought, as the garage number (sounding not a million miles away from The Horrors circa Strange House) is quickly followed by one owing more to grunge and its Nevermind year zero followed by another that boards the psych/glam train currently steered by Charlie Boyer et al and so on. For such a young band, and one as hard working as The Wytches - we're told later in the evening they've played about eighty gigs up and down the land already this year - it would be churlish to dismiss them just yet. However, their main objective at such an early stage of their development revolves around finding their true identity. Resolve that little quandary and the world could be theirs for the taking.

Which brings us onto the reason why we're here in the first place. Regular visitors to Brighton's multi-venue Great Escape shindig will no doubt have found themselves in the intimate confines of The Haunt at one point or another. Compact, cosy, and with a low ceiling that's probably seen more condensation than paint brushed off its exterior, it's the perfect setting for a band of Future Of The Left's stature. While their popularity continues to grow; and understandably so due to the aforementioned How To Stop Your Brain..., they're one of those bands who thrive on interaction at such close proximity with their audience. From the moment Falkous and co. launch into old favourite 'Arming Eritrea' to open proceedings, The Haunt becomes a sweaty sea of contorted bodies, arms and legs akimbo at regular junctures. And that's just on stage. Off it the surge to get to the very front lasts for the entire duration of the set, only subsiding when guitarist Jimmy Watkins makes one of his many excursions into the heaving pit stretching several rows back from the stage.

Following the opener by playing four songs in succession off the new album suggests the band themselves are supremely confident in its quality. And as both 'Bread, Cheese, Bow And Arrow' and 'Johnny Borrell Afterlife' find themselves sung back pretty much word-for-word, it seems their audience are in mutual agreement. Early single 'Manchasm'; which sees Falkous swap guitar for keyboard duties; predictably garners a healthy response, while the introductory chords of 'To Hell With Good Intentions' create scenes of beer spilling, rib crushing pandemonium. Other familiar compositions ('Robocop 4, Fuck Off Robocop') collide incisively with other highlights from the new record - 'I Don't Know What You Ketamine' being especially forceful - until a lengthy 'Lapsed Catholics' including a frantic run through 'Lightsabre Cocksucking Blues' at the song's mid point bring the show to a close. By which point pieces of drumkit sail above our heads, Watkins returns to the pit armed with a sweeping brush and various audience members are invited to the stage where beer bottles are duly gaffa taped to their foreheads.

Only at a Future Of The Left show, but then would anyone really have it any other way?

“I need to strip everything down, bec...