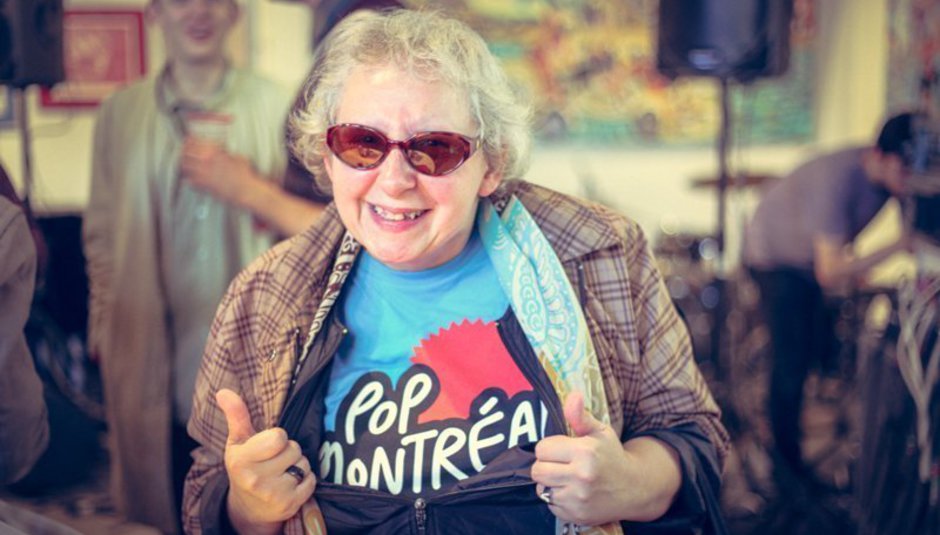 I enjoyed last year’s Pop Montreal so much I didn't want to leave. So I didn't. Well, I did eventually, reluctantly, five months later, a survivor of Montreal’s brutally cold winter, an achievement I return clutching like a badge of honour. I’m back to collect my belated prize - the beer terraces and the barbecues, the lazy walks through the Plateau, the final throes of summer sun in this most seasonally affected of cities. And I’m also here for the city’s biggest music festival.

Just before I left town in February we had several days of 25 below freezing. It’s the kind of coldness that cuts through your gloves and embarrasses your thermal underwear. On the final day of this year’s Pop it’s 25 in the right direction. I drink strong Italian coffee on the terrace of Cafe Olimpico, a magnet for the previous-gen hipsters, conceptual artists and ageing hippies of Mile End, the neighbourhood Arcade Fire, Grimes and Godspeed! You Black Emperor call home. At the church across the road I browse the stalls of Puces Pop, the festival’s indoor market for locally-made arts and crafts. There’s so much I want to buy, and so little space in my bag. I walk to Parc Avenue, stopping by the St-Viateur bakery for the world’s best bagels (London, New York - you don’t come close) and stroll down Parc Avenue until I reach the foot of Mount Royal, the generously named hill that gives the city its name. There’s a drum circle at its base so I retreat towards St-Laurent Boulevard, the thoroughfare that runs from Chinatown to Little Italy, through Portuguese, Greek and Jewish neighbourhoods. It’s the city’s traditional dividing line - anglophones to the west, francophones to the east. That’s oversimplifying things, of course, but there’s something in it. Nearly all the Pop venues are within 10 minutes’ walk of here. This festival speaks both languages.

Montreal is an island. Too English for Quebec, too French for Canada, too European for North America. As in Portland or Berlin the low rents make it possible to survive here as an artist - and artists are everywhere. The Pop Montreal line-up includes no fewer than 240 Montreal acts (yep, I counted) and I can think of dozens of local bands that aren’t playing. Structurally it’s similar to SXSW or The Great Escape, but it always feels more like a festival for local fans than an industry bash. Sure, the venues are full of musicians, but that’s only because everybody in Montreal is in a band. The Big Three aren’t participating, but it’s easy to hear Grimes’ influence in the smart, kooky electropop of Mozart’s Sister, UN and Foxtrott; Godspeed’s snooty, hilarious acceptance of the Polaris Prize has everybody asking whether they’re funny or just being dicks (the jury’s still out); and the new Arcade Fire single - so disco, so bilingual, so Montreal - is played in almost every bar and cafe in town. Quebec’s musical poet-prophet is also here in spirit, and we’re not talking about Celine Dion. A brilliant version of Leonard Cohen’s ‘Is This What You Wanted’ is performed by Winnipeg’s dizzyingly eclectic Royal Canoe while Patrick Watson leads a choir of local musical luminaries through a powerful cover of the near-octogenarian’s ‘Democracy’ at the Theatre Rialto.

The Rialto is the most beautiful of the 48 Pop venues, which include five churches, a rock club known as the ‘Electric Buttocks’ (Les Foufounes Électriques), a room above a Greek restaurant, vintage clothing shops, record stores and several semi-sleazy dive bars. The Rialto dates back to 1923 when it was constructed in homage to the neo-baroque Paris Opera House. At an entertaining Friday evening concert, apparently the first ever country music show to take place in 3D, assured local Americana crooner Li’l Andy insists that this magnificent theatre is one of the best-preserved old buildings in the city. The only place to rival it, he says, is porn theatre Cinema L’Amour - he urges us to go there for the architecture. In another Rialto show, two of Montreal’s vast experimental scene’s most distinguished noisemakers, Tim Hecker and Colin Stetson, draw a huge crowd. It seems Hecker only plays venues he’s capable of breaking; centuries-old churches and creaky theatres like this one. I move away from beneath the balcony.

I skip the much-raved about Stetson show because he’s soon London-bound and pop into a ‘Weird Canada’ night just in time to catch Wannabe, a Spice Girls tribute act from Toronto. The English accents and soft-rock riffs are great fun and a crowd of mostly thirty-something women appear to be rediscovering Girl Power. God knows what they made of Carlyle Williams on afterwards, a local outsider artist who sounds a bit (but not really) like a calypso Daniel Johnston. It’s not good by any stretch of the imagination, but it’s compelling. Check out his YouTube channel if you’re brave enough.

He’s one of several esoteric local acts on this year’s line-up. Dishwasher, lead singer of alt-party band Think About Life, performs a 'therapeutic' five-minute set of seemingly disconnected words at Breakglass Studios, a venue better used to the more measured sounds of The Besnard Lakes, Purity Ring, Sunset Rubdown and The Unicorns. On the same stage, Murray Lightburn of The Dears presents an unconvincing ‘pop-opera’ which has something to do with angels. Then there’s Ukrainia and their brilliant moshpit-friendly Ukrainian speed-folk, Fabricville and their gay funk disco klezmer Whitney Houston covers, ‘underground big band’ Orkestar Kriminal and their Yiddish gypsy songs, and punk nerds The Bill Cosby Anarchist Society of America, who’ve written a whole album about the Teenage Mutant Ninja Turtles. Clearly there’s room in the Montreal music scene for everyone.

There isn’t a single stand-out act but there’s plenty of good stuff going on. Vancouver’s Hunting sound so much like Sparklehorse I can’t help but love them; Toronto’s Pick-a-Piper, formed by Caribou drummer Brad Weber, make energetic, hypnotic and organic dance music; Yamantaka // Sonic Titan practice Buddhism, play engaging psych-prog and look like Kiss; Portland’s Typhoon cram all 12 members on the small stage of Il Motore and perform one of the year’s most underrated records, White Lighter; Emilie et Ogden (Ogden is Emilie’s harp) is too Joanna Newsomesque but clearly has bags of talent, and it’s great to finally see Miracle Fortress. Their début album, Five Roses, named for a flour factory’s neon sign that towers above the Montreal skyline, is an overlooked pop masterpiece.

But my favourite Pop moments are the only-in-Montreal ones, the ones that made me so happy to be back in a city that so quickly came to feel like home: Pat Jordache, a local songwriter in the vein of Mac DeMarco and Sean Nicholas Savage, playing in the sunshine in Parc-de-la-Petite-Italie; Métropolis turning into a Little Beirut for Mashrou’ Leila, a Lebanese band breaking new ground for an Arab act by singing about sexuality and politics; a showcase in the Arbutus Records HQ with free beer and laid-back synth-pop from Calvin Love; a late-night set from Pierre Parpall, the godfather of Québécois R&B, not a genre you often hear about. He’s cheesy, he’s corny, he’s the housewives’ favourite, but fears this show was merely an exercise in hipster irony are quickly dispelled - he’s a brilliant, engaging performer.

Pop Montreal ends the only way Pop Montreal was ever going to end, with generously poured mixed drinks, a frenzied Metz moshpit, hoarse singing to ‘Paradise City’, and 5am poutine with old and new friends. I’ve already booked my flights for next year.