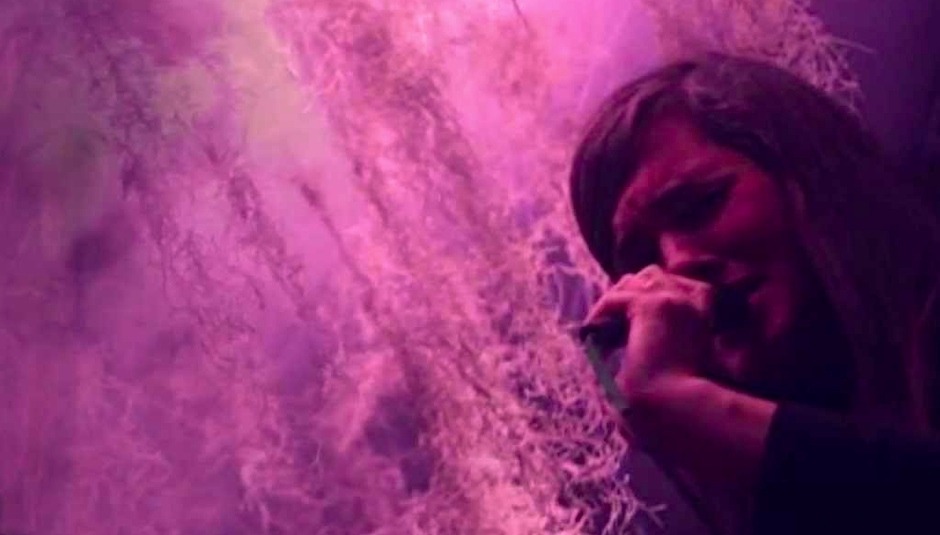 Julianna Barwick has made a great leap forwards with this year’s wondrous Nepenthe. Her last album, The Magic Place, was the insular creation of someone exploring the potential of their own voice. Any instrumentation besides Barwick’s own vocal felt that it was added mainly out of necessity; little more than bedrock for the swirling loops of a capella melody.

However, with Nepenthe Barwick brings other musicians into the creative process. Her voice interacts with a more cinematic breadth of sound, yet preserves the introspective emotion of her previous record. The result is one of the most musically and emotionally generous albums of the year.

“I wanted to give everything some space and make this record a bit more dynamic than The Magic Place”, Barwick tells me. “Rather than having things just building up and fading out, I wanted have things coming in at different times, and highlight the instrumentation more”.

In this, Barwick has undoubtedly succeeded. Lead single ‘The Harbinger’ is a thing of unparalleled serenity. The release of piano and choir during its rising swells is enough even months after first hearing it to make me close my eyes to fully absorb its tender impact. Nepenthe is encrusted with moments like this, from the otherworldly ascension of ‘Forever’, to the strings which strip away Barwick’s voice in ‘Pyrrhic’. By bringing in other musicians, Barwick has added a depth and dynamism to her music which she may never have achieved by herself.

“There’s no way I can pull this record off alone”, she agrees, talking about performing the new songs live for the first time. “I kind of could when I was touring The Magic Place… but with this there is so much going on, I can’t do it alone. It’s definitely a challenge to recreate the record, with several people playing on the record, and to rebuild those songs”. Later tonight, performing with a youth choir and accompanying guitarist, frequent moments of transcendence entirely justify her decision to widen her sonic palette.

This album isn’t the first time Barwick has created through collaboration, of course. 2011’s excellent Believe You Me was made in partnership with Helado Negro, released under the name of Ombre. But that was an entirely different process. “With Ombre it was definitely give and take”, she explains. “We would say, ‘I think we should play this part over that part…’ and ‘Do you like that or not?’ It was a total back and forth conversation”

This considered process of collaboration is reflected in the music. Believe You Me is an album which finds its dynamism in compromise, and in the contrast of the musicians’ individual styles. Nepenthe, on the other hand, emerges as a more satisfying, holistically unified entity, in spite of collaborating with a wider pool of musicians.

“It was super intuitive and gorgeous”, she tells me of the recording process. “We only had [the musicians] in the studio for one day, so it was really free, the way it was made… we didn’t tell them what to do, they just listened and made stuff up. It was perfect, and I love that about this record because everyone just felt it and did their thing, rather than working to instruction.”

Spontaneity, freedom, and a calm refusal to be too considered are what make Nepenthe so much more than the sum of its musicians, and it’s a perfect reflection of Barwick’s attitude to creation. Countless times during our conversation, she seems set adrift by my attempts to impose meaning onto her music. “There’s no real intention of how the listener is going to interpret it”, she asserts. “I just find that when I started looping my voice, it was just super satisfying to me to make music that way”.

To my ears, Nepenthe was loaded with beautiful and fascinating paradoxes. It sounds at once personal, yet universal; deeply introspective, yet incredibly expansive; entirely wordless, yet lyrically expressive. But when I bring this up with Julianna, she falls into faintly bored or confused silence.

I ask her questions about the significance of the wordlessness, the effect of repetition, and the impact of her background in visual arts. “It’s just the way I make music, and there’s no rhyme or reason”, she says, brushing away any attempts at imposing authorial intention onto her music. “I first got my hands on that looper, and I’d sing a little line… and it just came naturally to me to make these sounds and build these big harmonies”.

I ask her if she’s drawn to texture above repetition. “Yes”, she replies, more emphatically than any answer she gives during our entire conversation.

That isn’t to say that Barwick is unaware that her music leaves plenty of space for an individual response to a personal creation. Indeed, she acknowledges that this is one of the side-effects of her music’s repetition and wordlessness. “I think that’s why people can relate to it or they feel it”, she says. “It comes from an extremely personal place, very in the moment, but without me attaching words to it they’re just left with the sheer emotion of everything, which is definitely interpretative”.

But her audience’s relationship to her music is secondary to her main project: nurturing her lifelong love affair with sound. “It is transportative”, she concedes, “but that’s sort of an aside to why I do it. In order to create these giant choral arrangements, it takes loop after loop after loop after loop. So, it just takes that much repetition to build the sound up to where it needs to be. It just so happens that, in the meantime, it’s really easy to get lost in it”. Indeed, it is very easy to get lost in Nepenthe.

Barwick is awestruck by the power of texture, and evades any attempt to second-guess motivations which might have guided her creative process. “There’s not a lot of pre-planning going on with the music making. It just popped out”, she says without a hint of defensiveness. This freethinking approach to creation has resulted in a record as emotionally powerful as it is naturalistic. As obvious as it might be to say, Nepenthe is simply meant to be listened to – to be felt, not thought; to be experienced, not analysed. “The music is just made in the moment”, Barwick keeps telling me. And that’s exactly how it should be heard too.